Slovakia is vulnerable to Russian influence

The only country more vulnerable is Hungary. 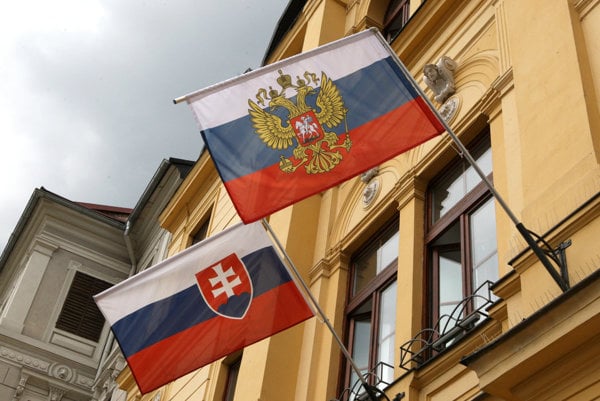 Slovakia is the second most vulnerable country towards Russian influence in the Visegrad Group (V4) region, after Hungary. The reason is the cultural proximity to Russia as well as a naïve perception by the country’s political elites of Russian foreign policy, according to the analysis published by the non-governmental organisation Globsec published on April 11.

Globsec focused on five public life areas that are linked to the resistance of countries towards Russian influence. Slovakia ranked as the second most vulnerable country, with an overall score of 51 out of 100. Hungary, which is the most vulnerable to the Russian influence got 57 points, while the Czech Republic received 38 points and Poland 30 points, the Sme daily reported.

“Transactional and opportunistic attitudes towards the EU and NATO, widely shared by political elites and the public, persistent energy ties to Russia and political elites’ naïve perceptions of the Kremlin’s geopolitical goals in central Europe put Slovakia in a very vulnerable position,” reads the analysis. “A small push could change the course of the country in either direction.”

Views and attitudes of the Slovak public ranked 53, which is the highest among the V4. They differ to a certain extent from the rest of the V4 countries, reflecting different nation-building narratives, contemporary history and public perception of Russia and the West.

“Slovaks are still among the most EU-positive V4 nations, but at the same time are the least supportive of NATO and their level of anti-American sentiments is the highest in the region,” the analysis reads.

Such attitudes create fertile ground for further erosion of the pro-western orientation of Slovakia and political forces trying to capitalize on such sentiments.

This is also reflected in the results from the political landscape category, where Slovakia ranked as the second most vulnerable after Hungary with an overall score of 50. The position of the main ruling party, Smer, towards the Russian Federation is referred to as “friendly pragmatic” and is characterised by pursuing economic interests and avoiding open criticism of Russian domestic and foreign policy. Slovakia’s high level of energy dependency on Russia and the economic profitability of providing transit for Russian gas into western Europe also play a role.

Another coalition party, the Slovak National Party, is known for its long-term sympathies towards Russia and open disdain for NATO and the United States, although this type of rhetoric changed recently with the change of party leadership, according to the analysis.

Slovakia also scored relatively high in the media and state countermeasures categories, (40 and 78 respectively). The lack of effective state counter-measures to hostile foreign influence and the lack of public recognition thereof contribute significantly to Slovakia’s vulnerability.

As for the media, it is possible to observe two tendencies in the mainstream media in Slovakia. Firstly, the government attempts to influence the public media and therefore it undermines its perception of impartiality and accuracy to report on domestic and international affairs. Secondly, apart from a few exceptions, a majority of the Slovak private media are currently owned by a few local financial groups and businessmen.

The analysis also pointed to the recent cooperation between the TASR newswire and the Russian news agency Sputnik, which was later cancelled. It praised the attempts of the Slovak media to fight conspiracy theories.

Regarding state counter-measures, Slovakia is almost as vulnerable as Hungary, with a score of 78. There are several factors driving such a high level of vulnerability. First and foremost, the existing security related public policies do not reflect the new realities created by Russian intervention in Ukraine and the use of hybrid warfare and disinformation by the Kremlin. The Slovak National Security Strategy was adopted in 2005 and has not been updated since then.

In the civic society area, Slovakia ranked as the least vulnerable within the V4 region, with the score of 39.

The analysis pointed to a small number of civic organisations and think tanks that have started to address the influence of disinformation and Russian propaganda in Slovakia. Despite their number, the most visible counter-measures and activities resonating among the public are those of individual activists or representatives of these organisations, according to the analysis.

Among the institutions that collaborated on the analysis were the Polish Institute for Public Affairs, Hungarian Political Capital Institute and Czech think tank European Values. The evaluation was attended by altogether 38 specialists who answered 40 questions, Sme reported.