Blog: Tuesday is better than Friday 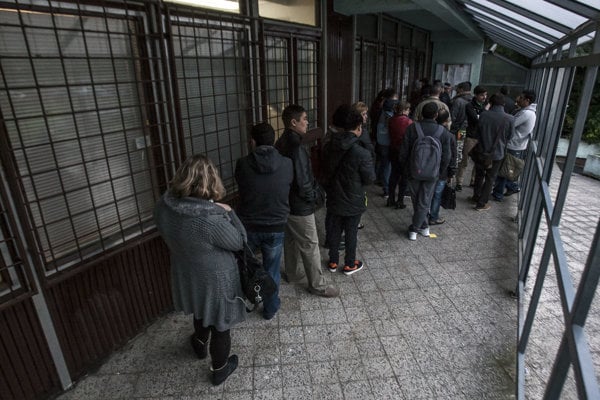 My friend and I stayed in the foyer to warm up as I was a little underdressed. After about an hour, the officers that had been coordinating the tickets, as usual, disappeared. A good Samaritan, the same one who explained the “last person” system to the people who had been there since 5:00 a.m. but didn’t know to “register,” began helping people get their tickets. At some point, the ticket stopped generating tickets at all and an officer indicated that they probably wouldn’t get to any more than it had generated. Again, my friend and I chatted to pass the time, mostly about the absurdity of this system and location. We found a bench. She showed me pictures on Instagram and I tried not to fall asleep. I got a coffee. By 9:30 or 10:00, the relevant screen for me read 305. We chatted some more. I texted to some friends who wanted to know how the process was going. 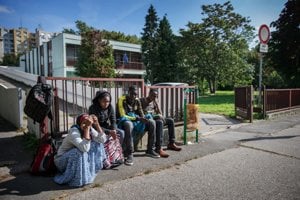 I started losing track of time when my friend suggested going to a nearby Pizza Mizza. I thought it was too early for pizza, but then realized it was 11:00 or 11:30. The screen read 314. We had a nice lunch, including more coffee, and got back to the office an hour later, just about when the office closes for half an hour for lunch. We had been taking bets on how far they’d gotten in the hour we were gone. I made the mistake of being optimistic and guessed perhaps 320. The screens were blank when we got there, but the good Samaritan and his wife told us nothing had happened at all. It was still at 314.

We decided to go for a walk. She grew up in Petržalka, so getting lost wasn’t a risk. We came back a little after 1:00, when the office reopens: 315. We went for another walk, to Lake Draždiak, and looked for snežienky. Getting back around 1:30 or 2:00, there were far fewer people, but the good Samaritan and others around my number remained, so I thought perhaps the pace had picked up after lunch: 317. At this point, my friend thought we should leave, but I wanted to find out exactly how many people they would get through. We chatted some more, played a word game, and so on. This whole time, of course, she is getting phone calls from work about different issues. Some time around 2:30, I saw a well-dressed Russian man who arrived well after most of us come out from behind the door for the 3s, and I confess I had to consciously stop myself from tripping him onto the concrete when he passed me.

By 3:00 p.m., when the office closes on Fridays, the sign read 322. We waited a few more minutes, in part because I wanted to look the officer in the eye who would tell everyone to leave. Finally, two women, one in uniform and another not, came out and told us they were done taking people for the day. The good Samaritan’s wife and my friend started speaking to them in Slovak, after which I was told they were asking why people can’t make appointments, why we can’t use today’s tickets as a way to get in earlier on Monday, and other perfectly legitimate questions. The women said they don’t make the policy, to which my friend said she understood but there is no one else with whom to speak. There was not much of a reaction to that beyond suggesting that Tuesdays tend to be easier.

My friend gave me a ride home and I texted complaints to others and fell asleep for about two hours. Then I woke up, went to get some dinner, tried to write, felt tired again, and went home to go to sleep, setting my alarm for 5:00 a.m. so I could make up for all the work I didn’t get done on Friday, even with having cleared my day. I think that might have been around 10:00 p.m., but am not positive.