A tourist in Slovakia can hike on 15,000 kilometres worth of marked hiking routes. 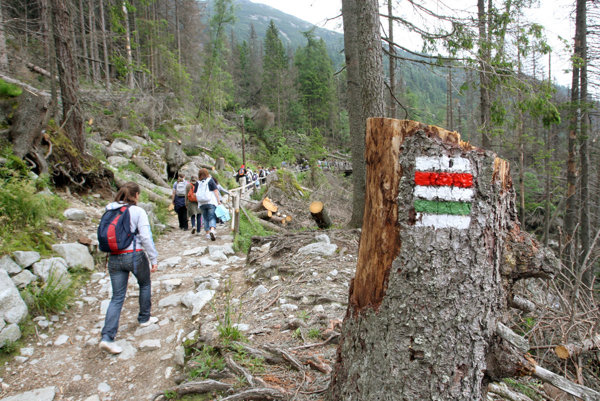 The length of routes overall changes due to arising of new ones and cancelling or changing the old ones. Only the Slovak Hiking Club (KST) has the right to flag routes.

“There are about 400 active trained markers in Slovakia and 80 people help them every year, but they cannot mark on their own,” said chairwoman of the marking section of KST Eva Škutová for the SITA newswire.

Each mark should be renewed every three years, so markers should renew the marks on one third of the total routes every year – 5,000 kilometres.

Due to finances, they could renew only 3,000 kilometres per year, as Škutová stated for SITA.

The Ministry of Education pays for the majority of expenses. Over the last five years districts and tourism organisations have also contributed.

Markers are not full-time employees of KST but rather they mark in their free time. Some of them worked 120 – 150 hours per year, others 8 hours. For marking they use ecological watered down colours, explained Škutová for SITA.

The routes are marked with four colours – red, blue, yellow, green. The colour means importance and length of the route. Red flags are the longest routes going through several districts, including on mountain ridges. The longest one measures 760 kilometres and goes from Devín to Dukla. Blue flagged trails also go through several districts but mainly in valleys. Green marked trails are shorter routes with local importance and the yellow marked are connectors between routes of different colours and places to get on and off a ridge.

The first marked route in the territory of Austria-Hungary appeared in 1874 near Banská Štiavnica.