(W)Rapping up two worlds in one music

The Fjúžn festival annually presents interesting musical projects from people who cross borders, literally or symbolically. This year, the headliner of the main festival concert on April 22 will be the French-Iraqi band Aïwa. 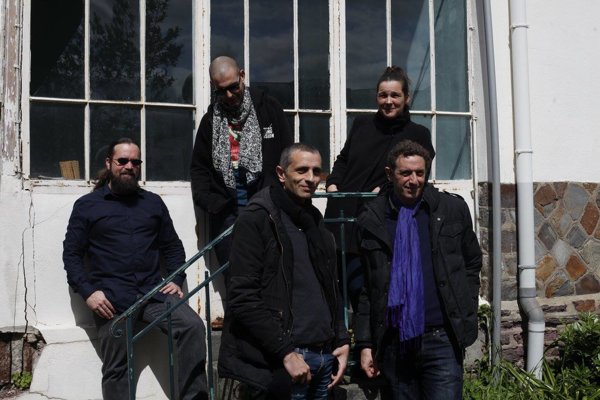 The group, formed around brothers Naufalle and Wamid, was founded in 1998 and combines traditional Middle-Eastern music with electronic sounds, female vocals and rap in Arabic. As for the music itself, they could be compared to Natacha Atlas or Transglobal Undeground with whom they often perform. The band, now also including the singer Severine, flautist Gael and electric guitar and drum players Cyril and Phil, has released three albums and gives frequent concerts around Europe and outside.

The Slovak Spectator spoke with Naufalle.

The Slovak Spectator (TSS): Has the fact that in yourselves two cultures combine, influenced your music in any way? If yes – is one of them more prominent, or dominant?

Naufalle (N): My brother Wamid and I founded the band almost 20 years ago because of our two cultures and we wanted to express the combination of them. We are of Iraqi descent; he was born in Baghdad and I was born in France. We grew up in France but we always kept a link with the country of our parents even though we were unable to visit it because of the wars. My parents played Arabic music at home when we were children and we started making music together. We wanted to mix our origins with the music we discovered in France like hip hop and electronic music…

TSS: In which languages do you sing? Is one of them easier, or preferred to express ideas, thoughts or emotions?

N: I rap in Arabic (Iraqi Arabic) and Severine sings and raps in English. For me it was a matter of doing something I never heard before. When I started, there were not so many rappers in Arabic. As a big fan of American hip hop, I didn’t want to imitate anybody but wanted to do my own thing without any influences. For Severine, it’s easier to write and express her thoughts and feelings in English. We are the generation that grew up with globalisation and globalisation means a lot of American culture everywhere (movies, music…)

TSS: You played in the Czech Republic and Hungary. Do the audiences there differ from those in France, western Europe; or Maghreb? What was the feedback there?

N: We played in 2004 at the Acropolis in Prague and at Traffo in Budapest. Both were amazing concerts and we had very good feedback especially in Prague. I can still remember the crowd stepping on the wooden balcony to bring us back after the show for more songs. The audiences do not differ in the way that they want to party and have good time when going to a concert. The fact I rap in Arabic makes it feel like abroad even when in France. What I can say about our tours in Poland is that people were discovering many different styles of music following a period when nothing was passing the borders and the Iron Curtain and they were happy to have us in their country.

TSS: Have you ever performed in Slovakia?

N: We have never performed in Slovakia; we just crossed the country to go from Prague to Budapest. I must confess I don’t know so much about your country apart from Alexander Dubček whom I admired when I was younger.

TSS: Where do you usually play – in smaller clubs or bigger festivals? If both, which ones do you prefer?

N: We have played in many different places from small clubs to stadiums and even on the roof of a shopping mall in Venezuela! We do prefer playing in small clubs because we prefer being close to our audience and able to see people’s feelings when we play our music.

TSS: Is it easier, or more difficult to work with a family member?

N: Working and creating with family members is just the story of Aiwa: I created the band with my brother and Severine, the female singer, is my wife (we have 2 kids). It is not really difficult as we know each other so well and also you don’t behave the same with your relatives or wife as with other people. It has always been this way with Aiwa and that’s OK for me!