OĽaNO wants Danko to step down as parliament’s speaker after what they call an unprecedented measure. 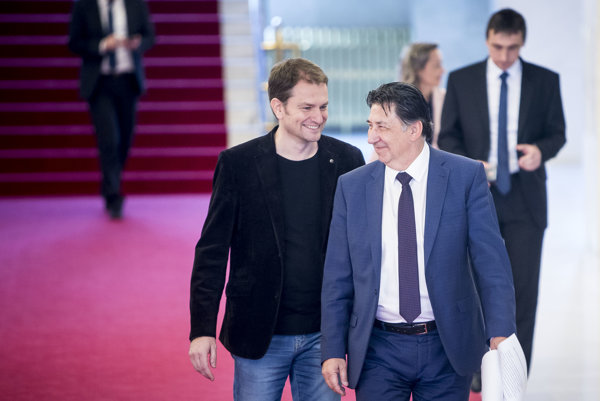 People who turn to opposition MPs with their petitions, complaints, or reports of, for instance, corruption, cannot be sure that their letters will not be read by others than their intended recipients.

Opposition Ordinary People and Independent Personalities (OĽaNO) MPs reported that the head of the Parliament’s Office, Daniel Guspan, ordered the staff of the parliament’s filing room to open all letters addressed to individual MPs if they are sent anonymously or from an ordinary member of the public. The rule has been effective as of April 7.

The Parliament’s Office denied the accusations of violating letter privacy.

OĽaNO MPs Igor Matovič, Ján Budaj, and Veronika Remišová told a press conference that they have received opened letters from April 10. They claim that they receive tens of letters every month from their voters and people who wish to report corruption suspicions. The letters are sometimes signed and sometimes sent anonymously. Matovič read sections of some of his letters that he received in April. Some of them were opened, with security measures as an explanation.

Matovič alleges that the measure was implemented following Danko’s order.

“Only Andrej Danko and nobody else is responsible for this control,” Matovič told a press conference on April 25 in front of the parliament.

Opposition MPs claim they have not been informed that their letters would be opened. The text of the order for the filing room, that Matovič shared with journalists at the press briefing, reads that the staff of the filing room should open letters that were sent anonymously or signed by a member of the public and if they find the opened letters contain obscene or defamatory language, they are instructed not to pass the letters on to the MPs. Instead, they should archive them for three months and then discard.

Danko’s office however denies such accusations. The parliament’s spokesperson, Zuzana Čižmáriková, in turn accused Matovič of manipulation and explained that they deal with the letters in line with the recommendations from the Interior Ministry and the Office for Protection of Constitutional Officials, she told the Sme daily. She insisted that it is a standard process, based on a directive from the Interior Ministry from November 2016.

“Every letter that does not have a sender or is from the public may be suspicious, since we have had three contaminated deliveries recently,” Čižmáriková told the daily and added that the staff of the filing room have clearances, are obliged to keep letter secrecy, and use protection when opening letters.

Guspan too argued the protection of MPs, when explaining why the filing room opens some letters. The Parliament’s Office that he leads specified that over the past 14 days, they received 789 letters out of which 39 were opened, Sme reported.

As for the obscene and defamatory language in letters, she admitted they do not pass them on to the recipients but notify them that they have received such mail.

“Parliament’s Speaker has all his correspondence opened, both from the public and from legal persons,” Čižmáriková noted for Sme, stressing that these are the rules and have not just been invented by Danko.

The Interior Ministry in fact admitted that they have issued a directive for offices like the President’s Office, the Government’s Office, ministries, and the parliament. The ministry did specify the cases where a delivery is to be treated as suspicious: if it does not bear the name of the sender or the stamp of the post office where it was processed, or if it seems too heavy or seems to contain an unusual substance. It does advise the staff of the filing room to wear face masks and protective gloves when handling mail and also recommends that this be done by just one person.

The police did not specify anything about the content of the opened letters which would prevent them from being delivered to their final recipients - contrary to the rules implemented in the parliament, where defamatory language means the letter is not passed on to the recipient.

OĽaNO wants to coordinate with the rest of the opposition and convene an extraordinary session to recall the parliament’s speaker from his post over the issue. In their reactions to the news, opposition MPs were mostly supportive of the idea to recall Danko, and most of them condemned the opening of their letters as censorship or violation of their rights.

The MPs also told the press conference they are filing a criminal complaint for violating letter privacy, which is recognised as a basic constitutional right in the Slovak constitution.