How social networks can earn you a ticket to Germany

Can a status on a social network change someone’s life? Yes, if you write humorous stories about a fictive German ambassador. 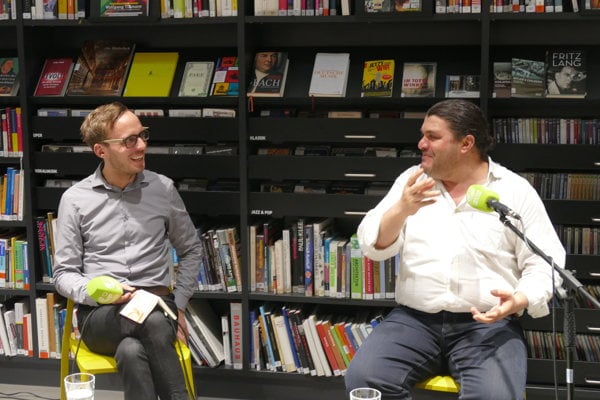 Assaf Alassaf (r) talked about his life and his book in Bratislava (Source: Courtesy of the Goethe Institut in Bratislava)
Font size:A-|A+

Syrian-born dentist Assaf Alassaf, who had to flee his home country due to conflicts with the ruling regime, started writing his funny anecdotes back in 2013. What began as a joke later developed into a series of postings transformed, with the help of German translator Sandra Hetzl, into a book titled “Abu Jürgen. Mein Leben mit dem Deutschen Botschafter” (Abu Jürgen. My Life with the German Ambassador), which unintentionally earned him a ticket to Germany where he now lives.

The book is currently available in German and it is being translated into French and English.

The Slovak Spectator spoke to Alassaf who was a guest at this year’s [fjúžn] festival.

The Slovak Spectator (TSS): What was the impulse for you to start writing?
Assaf Alassaf (AA): It’s linked to my childhood. I read a lot of books. Even though my parents are not highly-educated, they encouraged us to read and be educated. I started writing some 10-12 years ago. I enjoyed it, so I continued this journey.

TSS: Was it a hobby in the beginning?
AA: It’s been just a hobby till now. I still work as a dentist, but I publish some articles from time to time.

TSS: Since 2013 you have been publishing anecdotes on Facebook. Why did you choose this channel? What is the strength of social networks?
AA: Facebook came to Syria in 2005 or 2006, but it was forbidden by the government until 2011 when the revolution started. It was like an alternative platform for people to say what they wanted without control. It’s your window to the world.

TSS: Why did you start writing posts about a fictive German ambassador?
AA: There was no plan, I wanted to create one to three posts. I enjoyed writing something completely fictional, with humour. The stories are not about not getting a visa, but about making a funny story, sending some messages between the lines, political or cultural.

TSS: What inspired you to create the character of Abu Jürgen?
A: Do you know what Abu Jürgen means? It’s “father of Jürgen”, it’s a nickname. You don’t use it in western culture, but in the Arab world it’s a joke. Now I can analyse this character, but when I wrote it, I didn’t think about it. It was a mix of corrupted Syrian officer, some actors from Arabic movies, with touches of anti-Orientalism.

TSS: What was the turning point that turned the posts into a novel?
AA: When I met the German translator from Arabic [Sandra Hetzl – ed. note] who told me about her project to translate new Arabic writing from social media into other languages. We then talked about the translation and chose the posts that we put in the book. We decided not to include some posts because they were very local and there was no chance to translate it. There was also the question whether we would include postings about other topics, but then we said no. We made the book about one topic, the visa.

TSS: You now live in Germany. What surprised you when you first arrived there?
AA: Every time you leave your country there’s something new. I wasn’t surprised by the quality of life, as for me it’s something natural. There is something you need to watch, like the relationship between the people and our community. People are similar in general, but there’s different culture everywhere. They behave due to their culture.

TSS: Are you trying to get rid of the prejudices and stereotypes people have about Arabs and Muslims? Do they change their opinion after meeting you?
AA: Most of the people I have met are open-minded; they are not surprised. But sometimes they are. For example, my friend was surprised that I know a lot about cinema and movies. But why? You should not be surprised that I’m Syrian and know a lot about movies.

TSS: Your wife and children are still in Lebanon. Is there any progress in the process to have them join you?
AA: No. I have permission to stay in Germany and I have the right and privilege to bring them to Germany. But the problem is in the German Embassy in Beirut because there are many people requesting appointments. That makes the procedures very hard and you have to wait for one year, sometimes a year and a half, to get an appointment. Now we are waiting for it.

TSS: Is this your first time in Slovakia? What kind of impression do you have?
AA: Yes. I like the city. Yesterday I walked through the Old Town. You cannot imagine how similar it is to the old city of Damascus. It’s the same, especially these narrow streets, the nature of the buildings. I feel like I’m at home.

TSS: Is it important to write about these experiences to change the climate in the society?
AA: If you write something with this goal, it has little chance at success. But if you write something real, you can do it. The readers are clever, they can feel whether you are real or not. I will write it just to express myself, to talk about my experience.