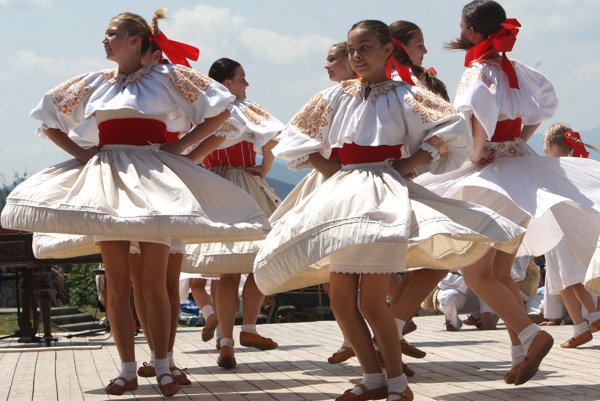 The price of folk costumes is getting higher, not only because of its historical value but also because it is impossible to make that costume today.

“Even if we keep all the steps to make it we wouldn’t get the same result as our ancestors one hundred years ago,” stated the ethnologist Jana Mládek Rajniaková, explaining that climatic conditions and soil has changed so also that the raw materials, particularly linen from flax, would have different characteristics.

Time has also played a role, as many parts of costumes are very hard to get, if possible at all.

The prices of traditional folk costumes differ. It could be several dozen euro for one piece of folk clothing or hundreds or even thousands of euros for a complete costume.

“The most expensive complete costume I have ever seen in Slovakia was sold at auction for more than 500 euros,” said the ethnologist. It was a woman’s costume from Horný Tisovník.

“It won’t lose its value but the other way round, it will rise,” said Lýdia Žáčková, the spokesperson of Poštová banka (Postal bank).

Valuable and highly prized parts of costume are those with indigo dyed cloth. During the 1950s blue print workshops stopped and the practice almost disappeared.

“Those parts of clothing sewed by golden or silver thread are also precious,” added the ethnologist.

The Postal bank has opened a grant for the best ideas connected with cultural heritage. The money should be used for art, the buying and renovating of clothes, folk costumes in which artists perform with or renovate Slovak musical instruments and other ideas connected with the traditions and history of Slovakia.