Fight against terrorism is important, Lajčák and Tillerson agree

The Slovak Foreign Affairs Minister was among the first European statesmen to meet the US Secretary of State in Washington. 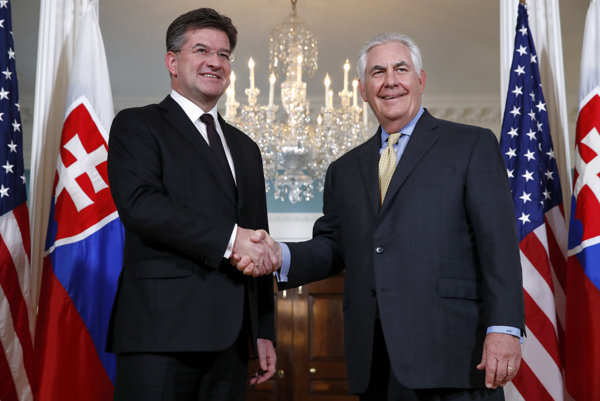 The fight against terrorism is a priority both for the USA and Slovakia, and Washington appreciates the concrete steps of Bratislava in this field.

This is how Slovak Foreign Affairs Minister Miroslav Lajčák commented on his first official meeting with US Secretary of State Rex Tillerson in Washington on May 8.

“The priority for the USA – which was confirmed also by this meeting – is the fight against terrorism, which is perceived as the number one threat,” Lajčák told the TASR newswire. “Of course, the USA wants Slovakia to really be part of this fight and I’m glad that I could come with specific measures to this meeting.”

Lajčák informed his US counterpart about the measures the Slovak government has adopted and which are expected to be formalised this week.

Tillerson also appreciated the determination of Slovakia to fulfil its NATO commitments, including the financial ones.

“For us, solidarity is a two-way road – we cannot require solidarity when we need it but at the same time don’t show it when it’s our turn,” Lajčák said, as quoted by TASR.

Lajčák was one of the first European statesmen to meet with Tillerson in Washington. He assumes this is mostly due to good relations between the two countries. The USA considers Slovakia a partner when solving various problems, be they terrorism, conflicts in Ukraine and the Balkans, or the stabilisation of the situation in Syria, the Slovak minister added.

The meeting was very dynamic, interactive, friendly and specific, Lajčák commented. Since Tillerson is a former businessman, they also discussed the business environment in Slovakia and ways to improve it, as reported by TASR.