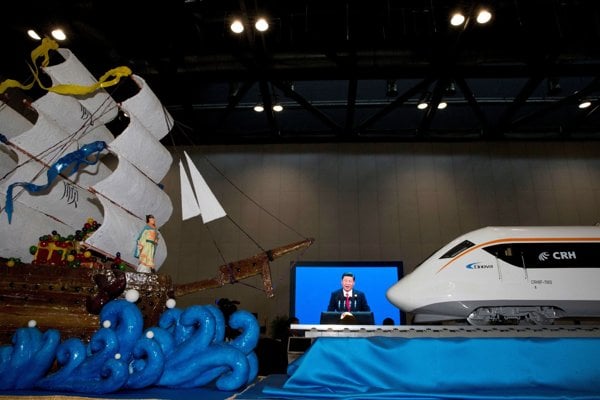 Chinese President Xi Jinping speaking at the opening of the Belt and Road Forum is displayed on a big screen near decorations depicting a modern high speed train and Chinese Admiral Zheng, who commanded expeditionary voyages across Asia and East Africa in the 15th century, in Beijing on May 14. (Source: AP/TASR)
Font size:A-|A+

Slovakia has been reporting a long-term trade deficit with this Asian country. In 2015, imports from China made up more than 7 percent of Slovakia’s total imports. The share of Slovakia’s exports to China accounted for only 2.5 percent of the export total, the TASR newswire wrote. 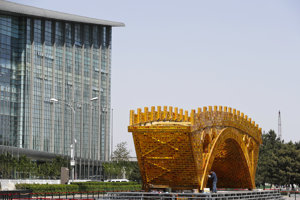 “It is not only desired, but also urgently needed to look for new forms of cooperation with the goal to achieve a change in the commodity structure of mutual trade,” the ministry wrote in its material, as cited by TASR. It stressed that the basket of exported products on the Slovak side especially should change, because cars make up almost 70 percent of Slovakia’s exports to China.

The mutual trade between Slovakia and China exceeds €6 billion in the long term but Slovakia has been reporting a trade deficit, which moreover, has been deepening each year.

Analysts: Economic ties between Slovakia and China likely to expand

Trade relations between China and Slovakia are likely to grow deeper in the following years, agree analysts, who believe that Slovakia is attractive for China in terms of geographical location and its cheaper labour force.

They stress that China belongs among the countries boasting high economic growth.

“That trend translates into rising living standards and the growing purchasing power of its inhabitants,” said Poštová Banka analyst Jana Glasová as cited by TASR. “Also on the rise is the Chinese demand for EU products, particularly those on the more expensive and luxurious side, whether it be electronics or cars. Therefore, China represents an interesting market for Slovak exporters.”

The analysts expect economic ties between Beijing and Bratislava to expand, as Slovakia may serve as a gateway into Europe for Chinese investors.

“There is room for greater cooperation in foreign trade and the proposed restoration of the Silk Road could contribute to that,” said Slovenská Sporiteľňa analyst Katarína Muchová. “However, much will depend on its specific form and extent.”

Muchová believes that there are several factors working in favour of Slovakia that attract foreign investments. Among these are geographical location, eurozone membership, a good ratio between the quality and cost of the labour force as well as well-developed industry.

There could also be other factors at play behind Chinese interest in Europe.

“Growing Chinese investments are also likely to be the result of the fact that in many cases it’s more advantageous for Chinese entrepreneurs to open up their branch in Europe or carry out an acquisition than having to deal with the physical distance when exporting their products to European countries,” said Glasová.

Any potential slowdown of the Chinese economy shouldn’t have a direct influence on the Slovak economy, as China is not one of Slovakia’s most important export partner countries. However, Slovakia could feel the adverse effect indirectly, via the deceleration of economies of individual European countries or America.

Experts: More words than actions in boosting ties with China

Several experts warn that while Slovakia is speaking about boosting economic ties with China, for now there are more words than action.

“Slovakia has fallen asleep at the switch,” said Peter Baláž of the Bratislava-based University of Economics, as cited by TASR. “The government is making statements that it is committed to boosting economic ties with China, but tangible results are lacking.”

Head of the Stratpol think tank, Richard Turcsányi said that, from among the Visegrad Four (comprising Slovakia, the Czech Republic, Poland and Hungary), Slovakia is the least important trading partner for China.

“The biggest difference between us and the rest of the V4 resides in the fact that they’re truly committed to developing relations with China,” said Turcsányi as cited by TASR. “In Poland and Hungary, for example, there’s quite a broad consensus on the issue across the political spectrum. By contrast, no such discussions are taking place in Slovakia. Since Robert Fico’s second government (2012-16), Slovakia has been doing only the necessary minimum or even less than that.”

The Slovak government has shown an interest in China’s New Silk Road plan, in which some $124 billion (€114 billion) should be invested in the years to come.

“It affords an historic opportunity and is considered the project of the century,” said Slovak Economy Minister Peter Žiga as cited by TASR. “There’s every indication that China and other major countries such as Russia are strongly committed to launching the new Silk Road. While details have yet to be announced, the question is whether or not we will be involved.”

The government is looking to hold talks with China in the near future, following the approval of the Concept on the Development of Mutual Relations group, in April.