Foreigners in Slovakia also make a date with their cities

Over 10,000 Slovaks and foreigners participated in the biggest volunteering event in central Europe. 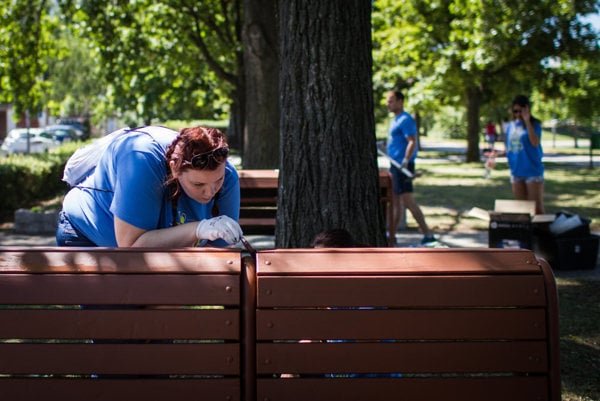 Wearing T-shirts with the lyrics of the Slovak band Tublatanka, thousands of volunteers went on a “date” with their city June 9 and 10.

The 11th annual Naše Mesto (Our City), the biggest corporate volunteering event in central Europe, encouraged Slovaks and foreigners to volunteer at various sites across the country. Groups were able to paint fences, mow lawns, and spend time with the elderly or disabled people.

“The idea to make a whole day for volunteering in your city was really nice,” said Quentin Champomier, a volunteer from France who is currently working with non-governmental organisation Inex Slovakia.

Naše Mesto has become a regular group event for many companies across Slovakia. Throughout the years, they have begun to look forward to it, said Lenka Surotchak, the head of the event’s organiser Pontis Foundation.

“Aside from making Slovakia more beautiful, we are trying to build connections between the work of NGOs and nearby schools and institutions,” Surotchak told The Slovak Spectator, adding that the day often becomes an opportunity to form friendships.

The focus of this year’s volunteering day was education, Surotchak said. Pontis reached out to NGOs and institutions active in this field in various ways.

Fitting with the theme, several CEOs of Slovak-based companies helped at a school for hearing-impaired children on Drotárska Street in Bratislava. They helped by cleaning up the area and removing old furniture. US Ambassador to Slovakia Adam Sterling also participated by painting a fence. 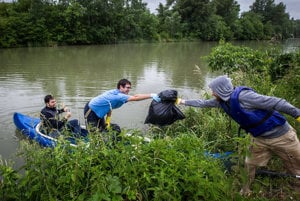 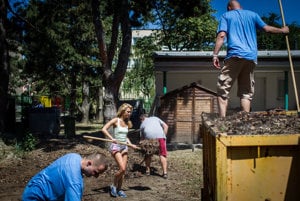 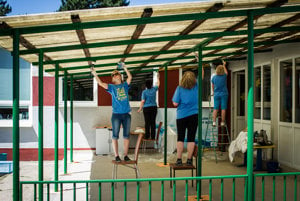 “It was invigorating,” Ambassador Sterling told The Slovak Spectator. He appreciated that it was great “to feel that I was contributing something in my small way.”

Paul Burt, managing director IBM International Service Centres, also said that he was grateful for the experience. He said that although IBM takes part in volunteering activities during the year, they look forward to the country-wide volunteering day.

“Certainly to be part of something on this scale, of this size, is always great,” Burt told The Slovak Spectator.

More than 10,000 volunteers helped at 233 NGOs, social care centres, schools and kindergartens across 52 towns and cities across Slovakia on June 9 and 10. Many of the NGOs that took part in the event said that they could not do their work without the help of volunteers.

The Bratislava-based social care centre DSS Integra, which took part in Naše Mesto in cooperation with Inex Slovakia, said that this is true for them. The centre offers services for children and adults with mental and physical disabilities.

Miroslava Zváčová, of Inex Slovakia, said that the smiles on the faces of DSS Integra’s clients and the volunteers showed that everyone enjoyed the event. 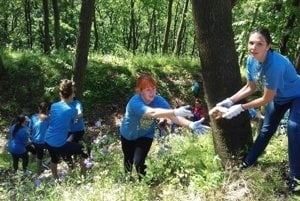 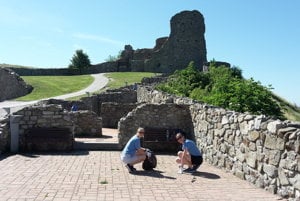 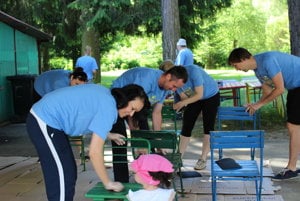 “It was a great way to broaden our horizons and meet new people,” said volunteer Lýdia Handzová, who spent time with clients of DSS Integra.

Friendships formed through Naše Mesto can last beyond the event, said Renáta Balážová, the head of DSS Integra. Some volunteers will regularly visit the centre to spend time with clients they met during Naše Mesto, she added.

Some of those who attended the June 9 volunteering event at DSS Integra said that the experience of spending time with the clients has given them a new perspective toward their own lives.

“In this hurried world, where we don’t have time for anything, we met people who have a completely different perspective on this world,” volunteer Marta Horňák told The Slovak Spectator. “I was talking to one client who kept telling me that we actually have lots of time. That was the biggest takeaway for me.”