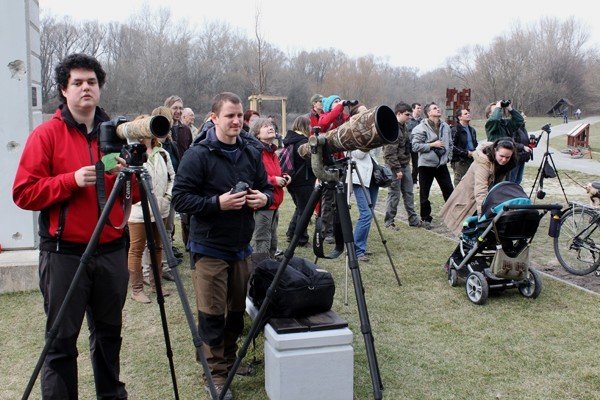 Though bird watching is not as popular in Slovakia as in the UK or the US, an increasing number of Slovaks are taking up the hobby. And while it may not be apparent at first sight, Bratislava and its environs, thanks to the region’s diverse environment, is one of the most interesting localities for birdwatching in Slovakia.

“We have here practically all kinds of forests, except coniferous – floodplain forests, oak forests, hornbeam forests as well as beech forests,” said Ján Dobšovič, ornithologist and the owner of the watching.sk travel agency which organises trips for bird watching, in addition to observing other animals and plants in Slovakia. “But also savannahs are here... Further the Danube River, which is a very significant migration route.”

Thanks to the fact that the Danube does not freeze during winter, a large winter habitat for water birds thrives here. For some species Bratislava’s environs are the most important winter habitat in central or even the whole of Europe.

With such rich diversity it is possible to see a whole range of bird species in the city as well as its surroundings.

“For example, across Slovakia 10 species of woodpecker live,” Dobšovič told The Slovak Spectator. “As many as nine of them also live in Bratislava or its environs. Only one species is bound to spruce forests which do not occur here, thus this one cannot be found here.”

Among the most important localities for birdwatching near Bratislava Dobšovič lists Devínske Jazero in the Záhorie region. Actually it is not a real lake as its Slovak name indicates but a land area which the Morava River inundates during floods. Thus this place is very suitable for watching water birds and birds of prey.

“We come here to watch sea eagles, eastern imperial eagles, three species of buzzards, gyrfalcons or peregrine falcons,” said Dobšovič. “This is undoubtedly the best locality in Slovakia for watching relatively rare species like the red kite and the black kite. But thanks to the proximity of the Small Carpathians, we can also observe more common species like common kestrel, hobby and hawks.”

Hrušovská Zdrž on the Danube near Čunovo is undoubtedly the best locality for watching wintering birds.

And in the protected bird area Sysľovské Polia near Jarovce and Rusovce, it is possible to watch the heaviest bird living in Europe – the great bustard. This is because it has chosen this locality as its winter habitat.

The Železná Studienka forest area also belongs to the localities most suitable for birdwatching directly in Bratislava.

“Here birdwatchers can see the very rare red-breasted flycatcher, for example,” said Dobšovič. “And you can get there by public transport.”

Dobšovič also recommends birdwatching in the Neusiedler See Lake area in Austria, which is less than a one hour drive from Bratislava.

“It is far and wide the most important area for birdwatching in this locality,” said Dobšovič. “While on the whole territory of Slovakia there have been registered about 365 bird species, at the Neusiedler See Lake alone it was about 330 species.”

Birds in the city

Many bird species have already adapted to city life. Apart from sparrows these include blackbirds, tits, as well as magpies, crows or jackdaws.

“In the boroughs of Petržalka and Dúbravka a small bird of prey, the common kestrel normally nests there,” said Dobšovič. “It eats mice and other rodents and thus keeps the area in which it lives free from such pests.”

In recent years it is possible to see the biggest pigeon living in Slovakia – wood pigeon – nesting in Bratislava, too.

The International Bird Day is of Slovak origin

While for most people April 1 is most notable for being Fools’ Day, for amateur birders and ornithologists it first and foremost belongs to the International Bird Day. This tradition dates back to the times of the Austro-Hungarian monarchy.

“It was launched by naturalist Oto Herman, who was born and lived in Brezno, now in central Slovakia,” explained Dobšovič.

“In the then Austria-Hungary he organised an event for schools to commemorate birds and trees,” said Dobšovič. This tradition of paying tribute to birds has lived up to its name as the International Bird Day to this day.

Birdwatching is probably the most popular in the US, but there are a lot of birdwatchers also in the UK, the Netherlands as well as in neighbouring Austria.

Slovakia is also interesting for birdwatchers from abroad.

“People come here to see bird species that they do not have in their countries,” said Dobšovič.

As in the UK there is less forest area, visitors come to Slovakia to see woods species like woodpeckers or owls. They also travel here to see species whose area of occurrence reaches Slovakia. For example, Slovakia is the western-most area in which the Ural owl occurs.

“But they are often pleased by seeing a species very common in Slovakia, for example, serin or hawfinch,” said Dobšovič.

“We found a nest of a hawfinch at Železná Studienka and they were so pleased,” said Dobšovič, adding that this species is commonly seen at bird feeders in Slovakia.