If the Modern Volkswagen Unions (MOV) fail to find a consensus with Volkswagen Slovakia’s management, the protest could continue until July 3. 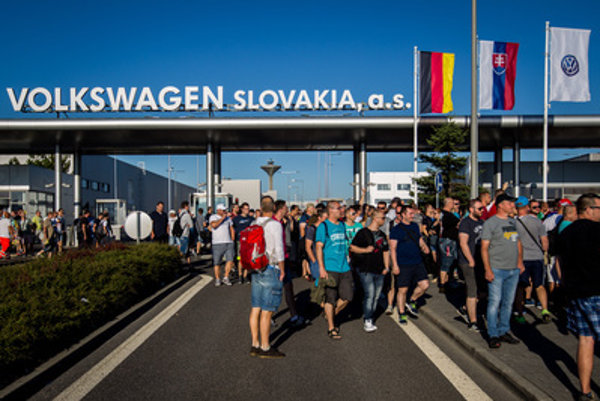 Meanwhile, a bomb alert was announced on June 20 in the early evening, according to the plant’s spokesperson, Lucia Kovarovič Makayová, who added – as cited by the Sme daily – that all necessary measures have been taken.

MOV unionists have reacted to the management’s claim that they were ready to communicate, by saying that they had not been contacted, although they (MOV) had informed the management about their willingness to negotiate. “Why don’t they call us if they are waiting for us?” MOV head Zoroslav Smolinský, who had criticised the communication of management via the media and a press conference, told the TASR newswire.

In the evening, unionists claimed that about 80 percent, or 2,000 people, from the afternoon shift were on strike, which stopped the production of SUVs completely with only a minor share of the New Small Family vehicles, like the Škoda Citigo or the VW Up! being made.

Strike in VW SK to continue

“We will continue this strike until we reach an agreement with the VW management,” Smolinský said, specifying that they are ready to hold on until July 3 when the factory holiday begins. The VW Slovakia plants in Martin, Stupava and Košice continue operation without any limitations, chairman of the VW SK board, Ralf Sacht, said. In Bratislava maintenance, repairs and minor works are taking place in the plant, he added. Sacht also said that he considered the requirement of a 16-percent increase in salaries irresponsible but both sides declare the will and need to negotiate and come to an agreement. “The conditions stated by unionists are as high as they were in the beginning, and we see no scope to fulfil them,” Ralf Sacht assured, as quoted by Sme. 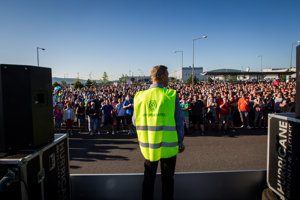 “I would welcome a quick agreement,” Prime Minister Robert Fico noted for TASR, adding that the events in VW Bratislava were also a subject for the June 19 talks of the Visegrad Four and the Benelux countries. The people in the West do not understand why a Slovak worker who works with high quality, a high productivity rate, and produces the most luxury cars, has a salary lower by a half or two thirds compared to a worker of the same company, located only 200 kilometres to the west, Fico explained. He also said that there must be some differences in salaries, but people have the right to require higher wages. “I cannot comment on how much or in what way the salaries should be increased, though,” he summed up.

Economy Minister Peter Žiga deemed the required 16-percent salary hike irresponsible in an earlier statement, after the strike was announced. However, the requirements include not just this condition, but 11 points in total.

Volkswagen will not leave Slovakia due to the strike, Labour Minister Ján Richter opined for the newswire.

Representatives of the Association of Automotive Industry (ZAP) – president Juraj Sinay and honorary ZAP president and long-term VW SK chair of the board, Jozef Uhrík, warned that the situation threatens not just the position of Volkswagen Slovakia in the country’s economy but also the automotive industry as such – which directly employs more than 18,500 Slovaks and indirectly, through sub-contractors, 129,000 Slovaks. The strike threatens employment, the economy, and the position of Slovakia on world markets, Sinay warned, adding that production may be moved from Bratislava to other regions. The unions’ requirement for a 16-percent salary hikes also threatens the competitiveness of the Slovak automotive industry in the Visegrad Group region, according to him.

Uhrík added that he experienced two strikes in his VW position which did not improve but rather deteriorated the situation, as the concern moved its plants out of Spain and Portugal following the actions.

Shortly before 19:00, Volkswagen Slovakia announced it would hold talks with the Modern Volkswagen Unions representatives again on Wednesday, June 21, from 15:30. Lucia Kovarovič Makayová told Sme that the 12th round of talks will be held at the request of the MOV.

Bomb forced the striking employees out

After the bomb was announced, police were called to the plant in the Devínska Nová Ves borough of Bratislava and were making an explosives check. The announcement was recorded shortly after 17:00, Bratislava Regional Police spokesperson Lucia Mihalíková told TASR, assuring that all necessary steps have been made. Employees had to be evacuated, Sme wrote at 18:30.