These events inspire an active lifestyle and help to develop philanthropy. 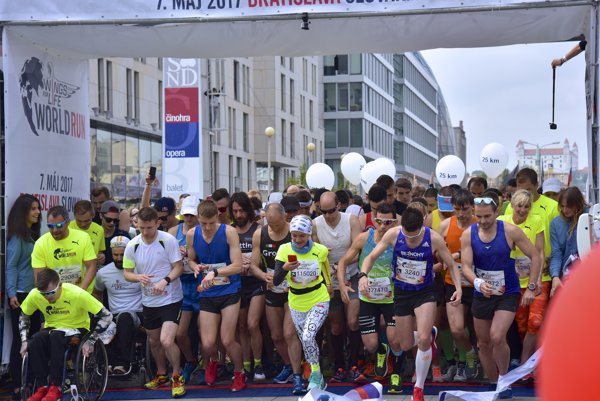 “These events have two levels,” said Michal Kišša, programme director for corporate responsibility at Pontis Foundation. “They motivate people towards movement and active lifestyle and help to develop philanthropy.”

On May 7, 155,288 participants of the Wings for Life World Run series entered the streets of cities all around the world, including Bratislava. The event collected €6,800,000 from the registrations and contributions, which will be used for research of spinal cord injuries.

ČSOB bank loans its name to the Bratislava Marathon, held every year in the capital of Slovakia. The 2017 edition registered 12,000 runners and the money collected for the registration fees is used for a project for children.

The ČSOB Foundation contributes €1 for each registered runner to the Konto bariéry account, used for purchasing special medical tools for 12 physically handicapped children.

“Running forces us to push our boundaries,” said Daniel Kollár, CEO of ČSOB bank, a partner of the Bratislava Marathon.

Running is increasing in popularity, as it is a simple and effective way to keep fit. As evidence, all 12,000 slots at the Bratislava Marathon 2017 were booked a few days prior to the start. ČSOB bank has been the general partner of the event for 10 years.

“Since that time running has become an inseparable part of our brand,” said Kollár, adding that it is also good for boosting creative thinking.

In terms of sport and exercise, many people are goal oriented – they need some motivation to engage in training. Charity runs offer them an opportunity to work on their performance and at the same time contribute to people in need.

“We are glad that this year the project has exceeded the dimension of a sport event,” said Kollár. It connects the runners with the people who are not able to run.

Part of the marathon event includes the Vyrovnaná šanca (Equal Chance) for children from asylum and crisis centres, for whom ČSOB covers the participation in children’s runs.

“This way they can also enjoy the atmosphere of the event with their peers,” said Kollár.

Non-alcoholic beer Birell loaned its name to the 10-km race, which is part of the Bratislava Marathon events. Birell also organises the Unstoppable, Nezastaviteľní in Slovak, project. In 2017 it presents the third edition.

“Birell is a brand for people with an active lifestyle,” said Jitka Němečková, manager of communications at Pivovary Topvar brewery. Ambassadors of the project are Paralympic cyclist Anna Oroszová and six-time Paralympic cycling champion Jiří Ježek.

“With the Nezastaviteľní project we wanted to point to the fact that there are many people among the handicapped who would like to continue in an active lifestyle or in sport,” Němečková added.

At the same time the company seeks to motivate the public to be more active and use their movement to help others.

“It is enough to pass across a special mechanical Birell gate on bicycle, roller-skates or on foot,” said Němečková. For each person to pass, the company allocates 20 cents to the purchase of special aids for the handicapped.

For runners the Tlmače half-marathon and Malženická 13 are popular in the region of the nuclear power plant Mochovce and Jaslovské Bohunice. Both are supported by the electricity producer Slovenské Elektrárne.

“Although the company itself does not organise any events, it significantly contributes to various charity and philanthropic initiatives and leads an active dialogue with partner institutions that organise such events,” said Lívia Nogová, brand project manager at Slovenské Elektrárne.

Kišša pointed out that corporate philanthropy is also beneficial for companies, as it improves their public image.

Slovenské Elektráne has been developing a strategic programme of corporate social responsibility called Energy for the Country (Energia pre krajinu).

“Slovenské Elektrárne is aware of its influence on the economy, society and social development of the region, therefore we maintain and develop good partner relations in the localities,” said Nogová, adding that the support of prosperous activities is part of the company culture. “We also cooperate with organisations that work with children of a different degree of physical and mental disadvantage.”

One of the most significant sport events with charity design is the Stars to the Children (Hviezdy deťom) – a football match of famous sports people and personalities, organised every year by the football club AS Trenčín. Slovenské Elektrárne is a years-long partner of the event.

“It is a unique project that connects physically disabled people with healthy individuals via sport activities, it gives an opportunity to try various sports, to highlight talents and develop their abilities,” said Nogová.

Slovenské Elektrárne is vying to lend a helping hand to all who are trying to integrate into the society and improve their social status.

“For the fourth consecutive year amateur cyclists can join a hobby race designed for the wider public called Energy on Wheels [Energia na kolesách], organised on the route of the last stage of the international cycling race Around Slovakia [Okolo Slovenska],” said Nogová.

Kišša explained that launching a campaign is an ideal tool to develop philanthropy. Many companies have even started their own public foundations.

Activities also include projects for children asylums and support of disabled children. Volkswagen financially participates in the bicycle race, On Bicycle for Children for Life, or Na bicykli deťom pre život in Slovak.

“The aim of the project is to connect financial means for children fighting with oncological diseases,” said Kovarovič Makayová

The race is open to everyone.

“It is enough to take the bike and join the peloton,” said Kovarovič Makayová.

The portfolio of Kia Motors Foundation also includes Vypni telku a zapni sa fitku na vzduchu (Turn off the TV and turn on fit outdoors), which is a project in Habovka, a village on the edge of the Tatra mountains, 15 kilometres from Liptovský Mikuláš. The goal is to build a playground for sport and recreational activities. Apart from that the carmaker also supports the CHESSFEST chess festival in Ružomberok, which brings together about 400 young players.

The company also allocated €143,000 to the 40 projects of the employee grant programme Sport in the Žilina Region 2017.

He believes that the new opportunities will encourage children and young people towards higher participation in sport, which will increase the quality of sport activities and competition in the region.