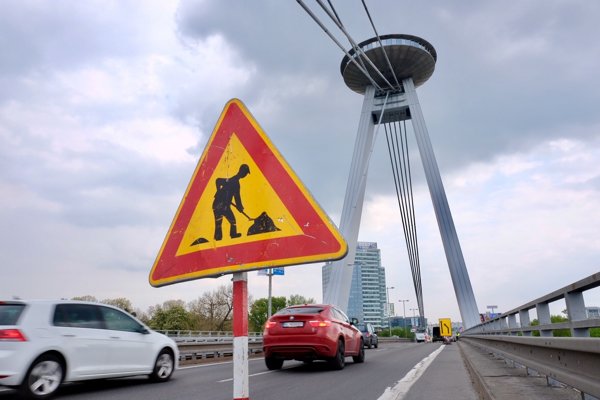 The reconstruction of the flooring of the SNP Bridge has started. (Source: Marek Velček)
Font size:A-|A+

The long-planned reconstruction of the flooring of the busy SNP Bridge (Most SNP) over the Danube River started on July 3. The works are projected to last until the end of August. During its 45-year operation the bridge has never received an overhaul. Originally the reconstruction was planned for 2016.

Traffic on the four-lane bridge, connecting the Old Town with Petržalka borough, will be limited only partly throughout the works. The bridge will be crossable in both directions, with one lane in each direction always open.

Bratislava City Council has chosen July and August for reconstruction purposefully, as during the summer holiday the traffic in the city is generally lighter.

“In view of the symmetric loading that needs to be maintained for this type of bridge, the outer lanes will be reconstructed during July and reconstruction of the inner lanes will follow in August,” said Bratislava Mayor, Ivo Nesrovnal.

All 10 lines of public transport using the SNP Bridge will continue to run during the reconstruction works. These have switched to the holiday schedule and thus run less often than during the school year.

The city council will finance the reconstruction from its own sources. It will cost €1.5 million and works will be done by the Swietelsky-Slovakia company. Work on the bridge will also continue during weekends and holiday days.

The reconstruction was preceded by a survey of the condition of the bridge floor in April. It showed that the steel under the asphalt is in good condition and is not corroded.

The city council also plans a complete diagnostic of the bridge and reconstruction of the pedestrian gangways. These will remain operational during the current reconstruction without limitations.

The steel cable-stayed SNP Bridge which after the fall of the communist regime was called New Bridge between 1993 and 2012, is the only bridge in Bratislava without a pylon in the river. Despite the devastating demolition of part of the Old Town due to its construction in the early 1970s, the bridge was declared the Construction of the Century in Slovakia in 2001 in the category of bridges.

The bridge is 430.8 metres long and 21 metres wide. Its pylon is 95 metres high and at its top there is a restaurant with an observation deck. The bridge was put into operation in 1972.