The Slovak Spectator spent several days on the Darknet. 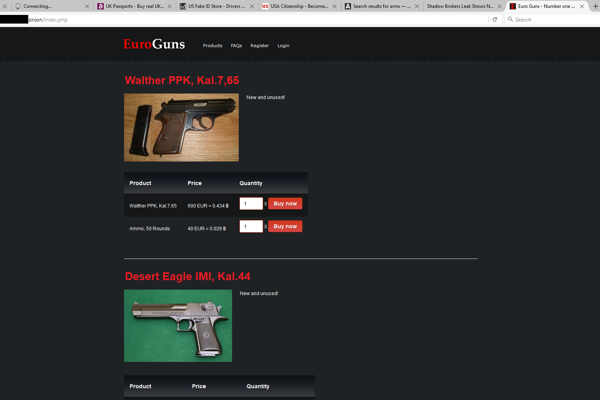 Guns are available for sale on the darknet website. (Source: Sme)
Font size:A-|A+

It is used by the mafia, journalists and activists. Tens of thousands of people do trade there without knowing the identity of their partners while using a currency that does not officially exist. Thus unwritten rules had to be created to ensure the entire system does not collapse.

A darknet or the Dark Web is becoming a widely used because it allows users to hide their tracks on the Internet, according to Tomáš Zaťko, the CEO of the Citadelo firm.

“This tool is important in countries with strong censorship,” Zaťko told The Slovak Spectator. “The original purpose was not to aid criminals.”

However, it is obvious that criminals, including Slovaks, have discovered it. Police recently arrested two Slovak citizens for the illegal sale of drugs via the darknet. At the same time they seized the electronic hard-to-track cryptocurrency Bitcoin (BTC) being used as a means of payment on the darknet. This currency hit a historic high on June 11, reaching $3018 per Bitcoin and fell to around $2200 in mid July. 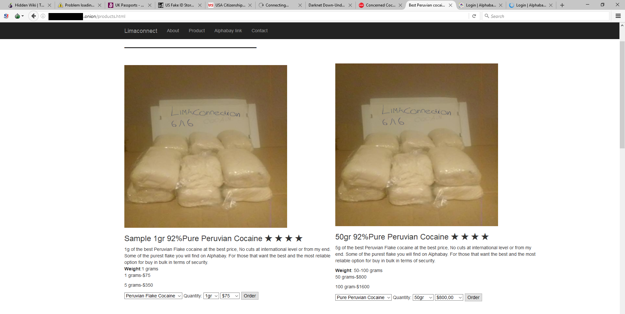 A darknet is formed by individual pages which can only be opened if a person knows their exact address and knows which program to use. Guessing a page name is not possible as they look like this: anonywebix6vi6gz.onion.

To open such sites users need the Tor browser originally developed by the US Army for the secure communication of its employees. 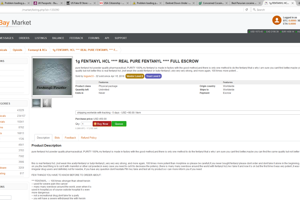 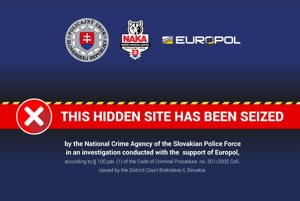 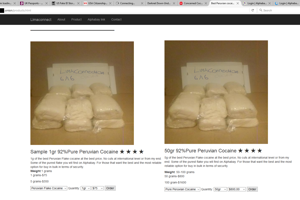 Entering a darknet is not difficult. The process can easily be found on the Internet. The user just needs to download Tor for free, find the list of websites working only through this program, and start exploring the dark corners of the Internet.

Soon a person finds that many of the published darknet websites, probably up to 80 percent, do not really work.

It is mostly because they are operated by individuals who have cancelled them for various reasons. Another possibility is that one company is running a number of sites, and when it ends, all of its sites end as well, according Polish internet security expert Marcin Koziej.

“Websites accessible through Tor come and go,” Koziej told The Slovak Spectator. “They are mostly maintained by individuals, and can easily be discontinued.” 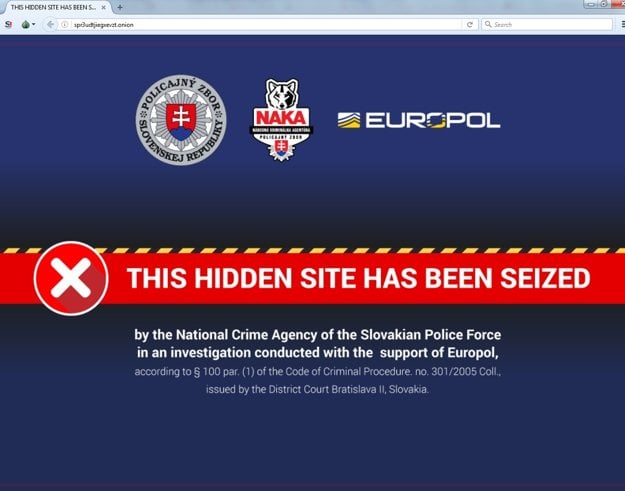 This is also the case of websites belonging to Slovak drug dealers. Today there was only the announcement that they were locked by the police due to a decision of the Bratislava District Court.

Among those pages whose links are commonly available on the Internet, The Slovak Spectator has found, for example, a child pornography page aimed at the spanking of small children. The operator offers five albums for download, the possibility of commenting on them and discussion of the topic in a forum.

There is a freely available page of a false passport vendor promising that the customer will not only receive ID, but will also be registered in official databases and will be able to travel freely with the document.

On another page, people were offering 92-percent uncut cocaine from Peru for $75 a gram.

On the contrary, sites with crowfunding for an assassin or ordering a hacker attack did not work. 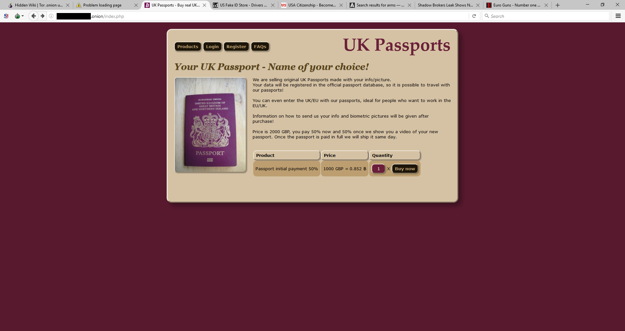 The websites do not always offer illegal activities though. For example, there are forums where people anonymously discuss ongoing protests in their countries.

There are actually many more sites running but people have to learn about them in locked forums or personally from other users.

When surfing a darknet, community and personal references are important, according to Koziej.

“The community is also a source of trust in some hidden sites,” Koziej says. “A trust network is reason to believe a particular site is legit, and not police bait.”

In general, dealers ask for bitcoins in exchange for goods. For example, a Walther PPK gun was available for BTC0.434, which is around €852.

The currency is produced by complex mathematical operations under the rule that only 21 million bitcoins can ever be created, preventing its inflation. The process is gradually slowing, which should resemble gold, a precious metal that has become increasingly rare following the start of its mining.

People can access their bitcoin via a unique key granted after creating a virtual wallet.

The Slovak Spectator has downloaded the mobile application that provided the key for BTC. Using this app, the editors bought BTC worth €10 at a special ATM in the centre of Bratislava in mid May. 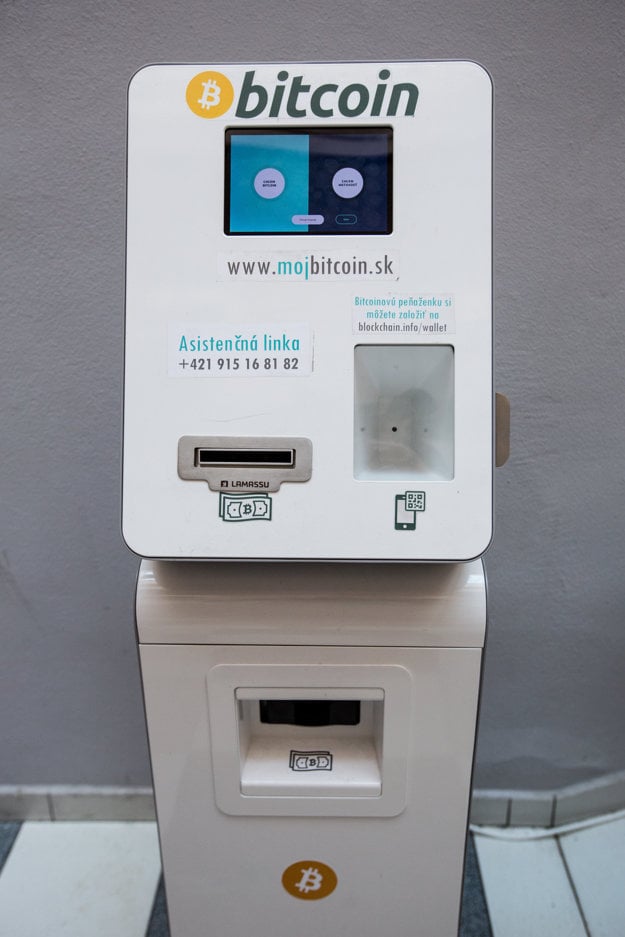 Special ATM in the centre of Bratislava. (Source: Sme)

The entire operation passed quickly and ended without a receipt. The machine only produced a confirmation QR code, which appeared on the display and the amount of 0.005 bitcoin appeared in the mobile wallet. If the transferred euros had immediately disappeared, the police or any bank would not have done anything about it.

For example, a system of intermediaries has been created. The customer first sends the money to a third party they both trust. After the salesperson learns that money has been transferred he or she sends the goods. After the customer receives what they paid for the seller gets their money from that third party.

In order to gain trust, salespeople in a darknet are much more customer-focused than their counterparts in ordinary life, British journalist Jamie Bartlett says in one of his lectures. He spent several months on a darknet, made contacts with the users, and bought marijuana in order to report on how the whole system works.

“Now, this kind of consumer-centric attitude is the reason why, when I reviewed 120,000 pieces of feedback that had been left on one of these sites over a three-month period, 95 percent of them were five out of five,” said Bartlett. “The customer, you see, is king.”

The Slovak Spectator did not buy any illegal goods and neither did it use its bitcoins.

Though it could be surprising that the vast majority of goods, even illegal ones, arrive via standard postal service, according to Zaťko.

“People in the European Union only focus on a sender operating in the Schengen area so that the package doesn’t go through scanners,” Zaťko said.