Cracked watermelon will not give you cancer

Do not trust the hoax that tells you it will - and other hoaxes that appeared on the Slovak internet this week. 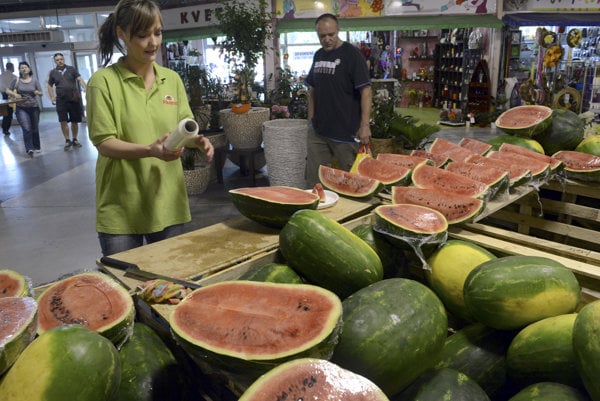 Mess left behind by migrants is a hoax

Do we want this to happen here? This is my own picture from the French town of Ostende, you can see the building of the Eurotunnel administration in the background.

Facebook user Jan Blažek posted a picture with the above caption on the Facebook fan group of Czech President Miloš Zeman. The picture shows a field of tents flooded with trash, and the caption suggests that the mess was created by refugees who had left the site.

The post can clearly be seen as a hoax, even if one did not check the picture in Google Images. The inaccuracies in the caption betray it: Ostende is not a town in France but in Belgium.

As for the picture, the Czech website fighting hoaxes, Zvol si info, wrote that it was taken at a British music festival in Glastonbury.

An anti-Semitic rant appeared on the internet. It would not be worth the attention if it did not get shared by Marián Tkáč, the head of Matica Slovenská, a state-funded cultural organisation.

The text reads, “The attempts of the global elites for the islamisation of Europe are prevented by a symbol - the Slovak double cross, that embodies Catholicism and Orthodoxy. And this Slovak double cross may allegedly not be displayed on Slovak national flags anywhere in the half-islamic western Europe!!! We have seen this before, when the Khazars ruled us under the cover of communism.”

The author of the text is the athlete and regional governor candidate Rastislav Blasko, who originally published it on the website Parlamentné Listy. When Tkáč shares this, he gives the text legitimacy to some in Slovakia.

The article does not state the source for the claim that the double cross may not be displayed in western Europe. It is an easy-to-check fabrication - just look at the pictures of the sessions of the European Parliament, for example, where the Slovak flag is displayed, complete with the Slovak coat of arms with the double cross.

The last sentence about Khazars is a hoax too. The Khazars were an ancient tribe that ruled the empire spreading between eastern Europe and Asia in early Middle Ages. The empire ceased to exist in 965, and that was practically the end of the Khazars too.

Their name however persists in anti-Semitic texts as a synonym for Jews. This is due to the unproven hypothesis that the Jews are descendants of the Khazars.

The Sme daily did not manage to get in touch with Tkac about the text.

Cancer from watermelon is a hoax

Do not eat watermelon with cracked pulp, otherwise you risk getting cancer, warns the website bajecnylekar.sk.

The cracks in the pulp of the fruit allegedly are “a clear proof that the melon was not grown naturally but rather with the use of dangerous synthetic substances that sped up its growth”.

This information is a hoax but has still been shared at least 4,000 times on Facebook alone.

The cracks and holes in the pulp of the watermelon simply mean that the fruit is botanically ripe, Zuzana Fischerová, head of the department of vegetable foodstuffs of the State Veterinary and Food Administration, told the Sme daily.

The botanical ripeness is a condition when the seeds in the watermelon lose their ability to nurture themselves from the plant.

The best time to eat watermelon however is slightly before this happens - at the time of its consumption ripeness, according to Fischerová.

“In its full botanical ripeness the fruit no longer has its ideal taste qualities, and the pulp is dry,” Fischerová said.

The cracks in the pulp are a consequence of irregular irrigation or steep temperature changes during growth.