Scaring off the aliens

How much longer can Slovakia afford to deter would-be foreign residents? 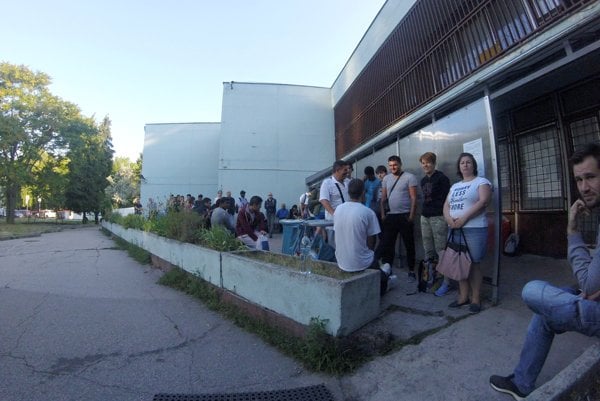 Why do Brits living in Slovakia fear Brexit? They worry that if they want to continue living in Bratislava, they will have to forget about the convenient queue for EU citizens at the local immigration office and instead pitch their tents in Petržalka whenever they need to change or renew their papers.

That is, of course, an exaggeration: Brits have other reasons to fear – or celebrate – Brexit. And there is not – yet – a campsite in front of the foreigners’ police department in Bratislava.

That said, people have reported they do actually have to wait for days on end to be seen, and some say they have slept in front of the office in Petržalka this summer. The office on Hrobákova Street, which is surrounded by the neighbourhood’s typical paneláky, is the improbable focal point for people from different countries of the world and from different walks of life. Here they meet, often at improbable hours of the day or night – typically the early hours – and not for some kind of awkward afterparty. Rather, this more-or-less unavoidable experience is what those who want to stay in the country legally must endure.

Elsewhere in Slovakia, foreigners do not have to go through the same kind of travails. This author has personal experience dealing with the equivalent departments in Trnava and Nitra, and at the latter in particular the staff, including the doorman, went out of their way to process the necessary bureaucracy with a human face.

Things are different in Bratislava. But it would not be right to place all the blame on the people behind the counter. They have been disparaged for their poor knowledge of languages – but, as the former management of the Office of Border and Alien Police argued, their language skills reflect the fact that they are secondary school graduates (this is the level of education that is required of people employed in the role), and their salaries are hardly extravagant.

For years now, every time the media has mentioned the problems for which the Petržalka office has become notorious, the response of the Police Corps Presidium was that the department would move from Petržalka to a better facility and thereby solve most of the capacity problems – including the queuing.

But it seems that the possible new locations for the department have been chosen with the aim of making them as remote from central Bratislava as possible. First, there was talk about a building in Kopčany (on the edge of Petržalka) that is reported to be in very poor condition. Now the office is expected to move to Vajnory, on the north-eastern edge of the city. This former military barracks might be in a better condition than the current place. But if the current location is a challenge for new arrivals to Bratislava, who have to wander around the concrete jungle of Petržalka in search of the right building, wait till they have to find their way to Vajnory.

None of these issues is news to those concerned (“Everybody knows this is how it works there,” as immigration lawyer Zuzana Števulová said recently). Very little has changed, at least for so-called ‘third-country’ (i.e. non-EU) nationals. And it is clear that the services this country provides to people who want to live and work here are way down the list of priorities of the police, the Interior Ministry, and the government. Perhaps it is too optimistic to assume that they will ever move far up the list.

Plainly, this is a mistake. With the ongoing brain drain, Slovakia’s aging demographics, and the already pressing lack of qualified workers in some fields, the Bratislava region and the rest of the country will soon need more than a few foreign workers to fill the gaps in the labour market.

Instead we are either putting them in the position of scarecrows (when it suits the xenophobic mood of the electorate in an election campaign), or putting scarecrows like the foreigners’ police department in Bratislava in their way.