Only Slovak in Game of Thrones: I kill – I have no choice

Vladimír Furdík is behind one of the most mysterious characters of the well-known series watched by the whole world. 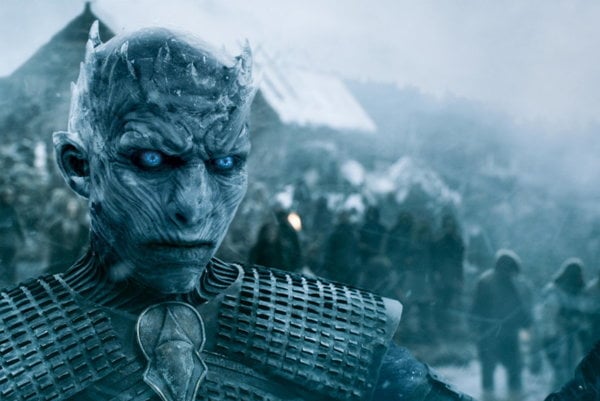 Vladimír Furdík masked as the Night King in the Game of Thrones (Source: Courtesy of HBO)
Font size:A-|A+

For the third season, Vladimír Furdík of Bratislava is part of the film crew from the very first till last day, and he knows of the happenings more than the stars, who often see the script as they are about to act.

“When you get dressed in the costume in the middle of the story, get a mask and the director tells you – you have to identify with the character, so that I can see in your posture someone who rules the world and who knows no other way than to kill; you have no choice: you have to play,” Vladimír Furdík, probably the only Slovak whose name appears in the currently most watched series, Game of Thrones, told Sme.

You would not find him in the first line of actors but it cannot be said by any means that the character he plays is be insignificant, on the contrary. In the seventh season which HBO recently launched, he will appear more in front of the camera than ever. He is behind one of the most exciting parts of the story.

Similarity is not coincidental

When the Night King comes onto the scene, the ruler of the White Walkers, "The Hound" Sandor Clegane faces him. It is hard to bear the stare of his icy blue eyes.

The bodyguard of Prince Joffrey, charismatic Scottish actor Rory McCann, sees him for the first time as the leader of the White Walkers. "Vlad, is that you?" McCann asks, surprised. "Yes, sure," smiles Vlad. The work of make-up artists is so convincing that it confuses even fellow actors.

Several famous actors from adventure films routinely call the Bratislava native Vlad. They know him as a stuntman and a fencer who prepares them for action scenes. However, as the scary Night King, he is changed beyond recognition. This is how the whole world sees him – although his true face still remains unknown.

The way to Hollywood

Vladimír Furdík started his career 30 years ago, in the Society of Journeyman of Traditional Crafts / Tostabur Espadrones and as a member of the Borseus troupe, led by already deceased Gustáv Kyselica. His first big opportunity came with the movie Three Musketeers, with Charlie Sheen and Kiefer Sutherland in the main roles, which was made in Vienna. The planned three days of shooting then got protracted to three months, and Vladimír got totally absorbed by the filming.

“I always try to do this job as well as possible,” he says. “It turned out people remember you: Sometimes, a person whom I have not seen for 10 years and with whom I have no contact recommends me for a new movie. I feel none of the movies as the best one; I am glad I can work in this branch but it is a job for me, same as any other,” he admits.

In rain, mud and cold

The Game of Thrones is so far his biggest project but he perceives it more as a professional fencer than as an actor. The series is shot in demanding conditions, especially the seventh season was allegedly very exhausting. Apart from outdoor scenes in Spain and Croatia, the series was shot also in the north where it was annoyingly cold in the winter months.

While the star actors come to shoot for two-three days, make their scenes and fly away, the staff, including martial arts choreographers, costume artists, engineers, lighting electricians or camera crew spend whole months “on the crime scene”, every day from morning till evening.

“In Belfast, where the series is made in studios but also outside, in forests and old quarries, it is cold in summer, too – it rains a lot and mud is everywhere,” Furdík says. Even the tiniest choreography has to be prepared in advance with the team.

It is better not to want to know

Game of Thrones is an elaborate series, including small details. The world it plays in resembles the Middle Ages; but it is much more cruel than we know it from history. From one episode to another, it untangles ever more and more complex and rough duels between clans which want to seize control of the empire.

In the story which is now followed by the whole world, Furdík perceives the villain he plays in his innocent nature: “In the kingdom, everyone can decide between the Good and the Evil. But the Evil has been created by someone, it has not chosen its form,” he comments.

Despite the hype surrounding the production he is part of, he does not feel like a series' freak. As a fan of fight scenes, he prefers to watch one of his favourite films.

However, the stories of seven kingdoms captured his interest. He perceives them as stories of the mediaeval Europe and its nations. “We can see ourselves in them, although they play in a non-existent country. And they insult nobody,” the Slovak thinks.

He is especially critical about scenes which require martial art preparation. As he works daily with the team on building up each battle or duel in advance, on editing them and offering them to the production team with all effects, he is always curious whether and how the director will use them in the end.

“Each season has a different director,” Furdík explains. “Some of them may let themselves be influenced a bit but most of them ignore advice and shoot a fighting scene on their own. As they have no experience with that, it can end up terribly – empty shots, bad photography, bad editing,” he lists. He acknowledges, though, that the series gets better from one season to another from the point of view of fencing.

He allegedly easily manages nagging curious intruders who want to know how the story will continue – he does not reveal anything, as they in fact do not want to know. Though he recently heard something, he considers this to be speculative information and has doubts that it was the film production who leaked the rumours. He prefers to focus on the eighth, the last series of the spectacular rough saga. He will start preparing it in a month.

The current, seventh season started on July 16 in the USA and on July 17 in the UK.