The planned construction work on the main highway in Slovakia may pose several challenges to drivers in near future. 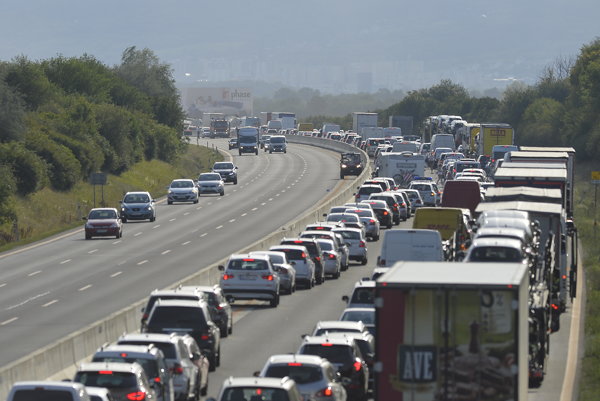 A five-hour wait in traffic jams and a transport collapse on the regional roads around the capital: this was the result of the mass July 20 accident on the cross-country D1 highway stretch between Bratislava and Senec.

The accident underlined the need for widening the existing roads in order to prevent the accumulation of traffic into one point, according to the chief highway administrator. The adopted measures securing flowing transport, however, are not enough to prevent the accidents that may block roads in the future.

“Slovak drivers are not used to driving in a narrowed left driving lane, so road accidents are happening more frequently,” Ondrej Matej from the Institute for Transport and Economy told The Slovak Spectator. “Moreover, it’s not good that the work is being carried out at several sections at the same time.”

Currently, the constructors are working on the widening D1 section between Bratislava and Senec, which will mostly impact the entrance to and exit from the capital.

Moreover, the Transport Ministry is finishing the construction plans for the Bratislava ring road project, which includes the D4 highway and R7 express dual-carriageway. The construction will impact several crossroads and highway exits around the capital, said Michaela Michalová, spokesperson for the National Highway Company (NDS).

“The detailed plans of organising transport during the construction work concerning the widening of the D1 and construction of the D4 and R7 are ready, focusing on keeping the smoothest transport possible,” Michalová told The Slovak Spectator. 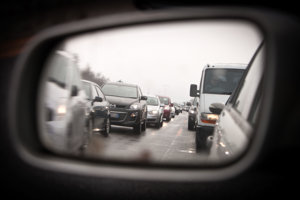 NDS is not planning to close any sections completely, but drivers have to prepare for narrower driving lanes, lower speeds and bypass routes, she added.

Not everybody, however, is satisfied with the plans concerning the ring road project. Bratislava’s borough of Vajnory, which will be affected by the construction work, for example, has not received any plans for organising the transport or the construction plan yet.

“We have not received them to this day,” Vajnory Mayor Ján Mrva told The Slovak Spectator. “Neither is it possible to comment on them though such construction requires the responsible coordination of transport in the respective area.”

Since they missed the projects, they appealed against the construction permission for D4, but the ministry’s appeals committee turned down their objections.

“I expect the NDS will discuss this with us and we will try to force the traffic out of the borough where the traffic is already dense,” Mrva said. 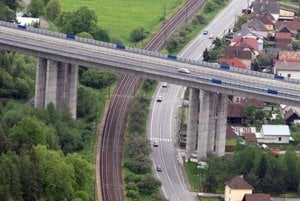 Mrva is also dissatisfied with the planned widening of the D1 stretch between Bratislava and Trnava. One of the alternatives was to construct a three-lane road with a stopping lane on both sides, plus two-lane collector roads.

The final solution, however, counts on widening the road to four lanes plus a stopping lane on each side, but without any collector roads. Mrva considers the change “a huge irresponsibility of the state and ignorance of the Bratislava Region’s needs”.

“All Slovaks use this highway when travelling to Bratislava or abroad, so in 2013 the experts also included collector roads in the project,” Mrva said, adding that the projects cost €4 million.

In his opinion, the collector roads were to serve for regional transport, the access of rescuers in case of road accidents, and also safe driving to and from the highway.

Matej, on the other hand, criticises this concept, saying the collector roads would concentrate the traffic into the D1, and thus slow down the traffic.

“The traffic should be dispersed by the construction of new second- and third-class roads so the cars from the satellite towns go not onto the highway, but to the first-class roads,” he explained. Moreover, it is necessary to secure functional and quality public transport, he added.

The Transport Ministry defends the current alternative for the D1 widening, referring to the recommendation of the expert committee.

“We consider the current solution the most effective for people living close to Bratislava, and justified in both transport and economic reasons,” the ministry’s spokesperson Karolína Ducká told The Slovak Spectator. She, however, admitted that the collector roads can be added in the future, if necessary.

Waiting for the Triblavina exit

The current and also planned construction will bring together six new highway exits, which would “secure enough connections to improve transport in this region”, Ducká said.

The fact, however, is that the works on the Triblavina exit (just outside Bratislava) have been suspended due to the change in the construction project. Similarly to the plans for the Bratislava-Senec stretch, the collector roads were also cut out from the original projects.

The state is currently waiting for official permission for changing the construction plans. If it is issued by the end of this year, the works may start in early 2018 and be finished by the end of 2019, Michalová said. The original deadline for the exit’s completion was May 2017.

Mrva, who is also a member of the Triblavina civic association, considers the decision “a catastrophe for Bratislava Region”. He claims that the decision to change the construction plans is at odds with the region’s master plan and traffic concept.

“The construction of bridges near Blatné and Triblavina require frequent transport restrictions, which result in long traffic jams when entering or leaving the capital,” Mrva said, adding that trying to avoid these sections then results in further traffic jams on the regional roads.

Situation may be worse

As for the planned restrictions, NDS plans to keep the traffic in three lanes in each direction near the Triblavina exit currently under construction. As for the planned Ivanka Sever exit to secure the connection between the D1 and D4, the state will try to reroute the traffic to the bypass routes, as it plans to construct the bridges and change the highway’s levelling.

To avoid accidents and further collapses it will be necessary to respect road instructions and speed limits.

Matej, however, points out that while drivers abroad are used to driving in narrowed left lanes, it is not as common in Slovakia. Moreover, drivers often do not follow the zipping principle when driving.

“Paradoxically, the more frequent organisation of transport in narrowed lanes would help drivers get used to it,” he opines.

Matej also sees another challenge that traffic may face when the construction of the Bratislava ring road project begins.

“If the Blatné and Triblavina exits are not finished before ring road’s construction starts, the traffic on the D1 around Bratislava in the morning and afternoon rush hours may collapse,” Matej said.