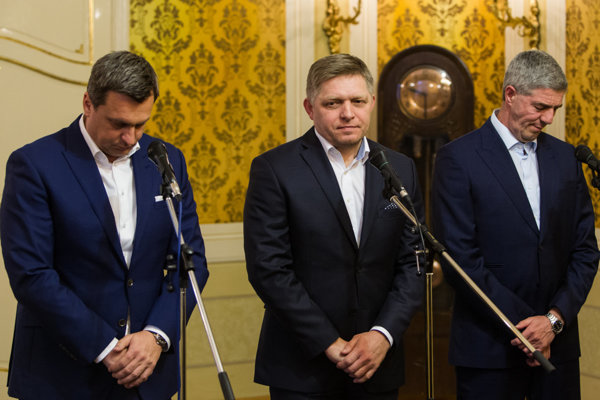 Speaker of Parliament and leader of the co-governing Slovak National Party (SNS) Andrej Danko withdrew from the coalition agreement on August 7. He explained this move as an absolute necessity to reset rules and adjust relations within the ruling coalition. He also cited the need to set completely new priorities that would be reflected within the process of drafting a new budget.

“The favourable socio-economic situation of 2017 shows the need to focus on new challenges and priorities that need to be reflected in the coalition agreement and the new Government Manifesto,” said Danko, as cited by the TASR newswire. “When the country’s economy is doing well, citizens themselves must feel it too.”

Smer, SNS and Most-Híd parties signed the current coalition agreement on September 1, 2016, after the fourth party in the coalition, Sieť of Radoslav Procházka, disbanded.

The opposition sees Danko's move as an effort of SNS to cover up the scandal involving the distribution of EU funds by Education Minister Peter Plavčan.

Danko denied the accusations and recalled that the system for drawing on EU funds in the education sector was set up in December 2015, when Smer nominee Juraj Draxler was at the helm of the education department.

As Danko said in an interview given prior to his party's withdrawal from the Coalition Agreement, the biggest mistake made by Education Minister Peter Plavčan (SNS nominee) was that he did not make a comprehensive change in the drawing of EU funds and continued along the line of his predecessors, who unfortunately had seen the absorption of EU funds as a competition between private companies and universities.

"This then degraded into a war among private companies," Danko said, as cited by the SITA newswire. "I do not find this fortunate. The absorption of EU funds should have been set directly into universities."

Prime Minister Robert Fico and the leader of the strongest ruling party, Smer, finds Danko’s move absurd. He is convening a session of the Coalition Council for Tuesday, August 8, where it is expected that Danko will explain his withdrawal from the coalition agreement.

“He [Fico] expects that the SNS chair will explain to his partners the absurd decision by the Slovak National Party which doesn’t introduce peace and stability into society,” said Beatrice Szabóová, the prime minister’s spokesperson. She added that Smer will act responsibly towards voters and the country as a whole at the session.

The Most-Híd party expects that Danko would arrive at the coalition meeting with a tangible proposal of what he needs to change in the coalition agreement. The party also expects an explanation as to why he decided to withdraw from the agreement. Béla Bugár, the leader of Most-Híd, said this after the party’s leadership session on Monday evening.

Bugár considers the situation to be serious, adding that he does not know exactly what Danko requires.

SNS vice-chair Jaroslav Paska indicated that the cabinet may collapse and that the current situation may even lead to an early election.

President Andrej Kiska met Danko following the announcement that he was withdrawing from the coalition agreement. Kiska’s spokesman, Roman Krpelan, told TASR that the president thinks it the task of the leaders of the three governing parties – Smer, SNS and Most-Híd – to discuss the issue among themselves at coalition sessions.

What the opposition thinks

The opposition Freedom and Solidarity (SaS) party also sees Danko’s withdrawal as an effort of SNS to divert the public’s attention from the scandal involving the distribution of EU funds for science and research by the Education, Science, Research and Sport Ministry, which is led by Peter Plavčan, a nominee of SNS.

SaS believes that Danko would like to get rid of the Education Ministry.

“He’s obviously found out that this is a sector where a lot of real work needs to be done for students, teachers, for Slovak society, rather than stealing,” they said.

If “this transparent August game by the SNS leader leads to the break-up of the government”, SaS is ready for early elections and ready to take power. It still views itself as the sole realistic alternative to Smer and the current coalition.

The opposition OĽaNO-NOVA said that dividing the loot of EU funds for science and research is so important to SNS that its head is ready to cause chaos in Slovakia for it.

Responding to Danko’s withdrawal from the coalition agreement, Veronika Remišová and Igor Matovič of OĽaNO-NOVA said that the action taken by the SNS head is proof that the coalition is unable to govern together and that instead of addressing the main issues in Slovakia, like education and health care, it will now quarrel about spheres of influence.

“Andrej Danko has failed in managing our country and has shown that he is unable to communicate,” said Remišová and Matovič. “After the coalition council session on Thursday [August 3] he pretended that everything was fine, but today he’s sending ‘paper’ notes to his coalition partners as if they weren’t members of the government but classmates at primary school.”

They added that this move won’t help Danko cover up the scandal concerning the distribution of EU funds for science and research.

A political scientist weighs in

Political scientist Juraj Marušiak said that it is difficult to assess the situation at the moment, as the formulation of the withdrawal from the coalition agreement is very extensive. He believes that coalition partners will try to negotiate in a way that allows the coalition to continue.

“It seems that Danko is not satisfied with the SNS’s position within the ruling coalition,” said Marušiak, as cited by TASR, adding that tensions between Smer and SNS have already been growing for some time. “We will see. The strengthening of the position of SNS will probably be in question. I also think that Danko sees this as a way to cover up the situation that has arisen surrounding the education minister and the scandal with the distribution of EU funds.”