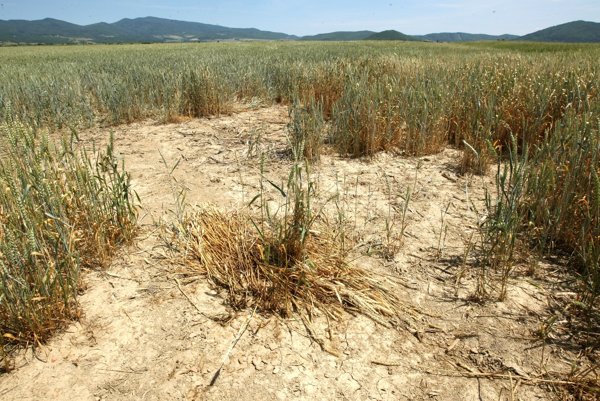 The climate is changing and this is also impacting Slovakia. One of the accompanying factors of global warming is changes in weather patterns. Slovakia has already faced several heat waves this year.

“The change is also manifested in record high temperatures,” climatologist Milan Lapin told The Slovak Spectator. He explained that in the last 20 years the records, in terms of extreme heat, have dominated fivefold over the cold ones.

In early August 2017, temperatures in Slovakia climbed up to 37 Celsius degrees, which is challenging for people, animals and also nature.

“Drought affects everything that grows in nature – in the fields, vineyards, our gardens,” said Jana Holéciová, speaker of the Slovak Agriculture and Food Chamber (SPPK).

The most affected agricultural crops are summer crops, such as rapeseed but also corn, sunflower, sugar beet and potatoes grown in the autumn.

Similarly, droughts do not benefit grasslands, animal feed crops and animals as such.

“They need extra hydration and farmers must cool down the barns in order to lower the internal temperature,” explained Holéciová. It is ideal if the animal can hide in the shade.

Extreme drought has also hit other parts of Europe. Italy has reported an increase in the price of olive oil, after a wave of extreme heat destroyed olive crops.

“A combination of high temperatures and extreme drought, also characteristic for this year, is bad for the growth of plants,” said Holéciová.

In regular monitoring by SPPK, farmers from several regions in the south of Slovakia and the region of Záhorie reported extreme drought.

“Warmer and drier weather between April and September can cause a many problems with drought and the costs of irrigation,” said Lapin.

A very bad harvest was already reported from the southern regions of Komárno, part of Nové Zámky, Dunajská Streda, Galanta and Trnava.

“In general, the further north we go, the more rainfall available during the maturing of the spikes and the better the malt barley harvest,” said Holéciová.

However, farmers cannot yet predict the harvest of autumn crops, from which corn and sugar beet are very sensitive to drought.

Farmers in several parts of Europe have already reported an increase in food prices due to the extreme drought that have compromised crops. In Slovakia the harvest has not ended and therefore farmers cannot give an exact answer. The price of flour affects the final price of bakery products only by 20 percent, specified Holéciová.

“Moreover, farmers and food producers are not the ones who make the final prices for consumers,” she added, referring to retailers, who are not covered by the chamber.

Climatologists confirmed that the climate in Slovakia has changed, which can be observed in the air temperature, air humidity, precipitation, etc. The variability of climatic elements is also changing.

“It is mainly the occurrence of tropical and super-tropical days with maximum temperatures of over 30 or 35 Celsius degrees,” said Lapin. He added that in 2015 there were 23 days with such super-tropical temperatures in Slovakia, while prior to 1990 it used to be maximum five days a year.

“Changes in precipitation changes the humidity of the soil, causes erosion and brings a risk of drought,” Lapin explained.

Farmers are not ready to face extreme drought in the future due to obsolete technology.

“The irrigation systems are in bad technical condition and they require a huge financial injection,” said Holéciová.

In 2005 the state stopped investing in irrigation systems, which affected acreages of land that could be effectively watered.

Based on SPPK data, the farmers currently rent about 170 irrigation systems. Out of the 480 available, that could ideally irrigate 150,000 hectares. However, the current technical conditions of the systems enable the irrigation of only 60,000 hectares.

“In reality, it is even less,” said Holéciová, adding that the modernisation of the systems is in process but only at the expenses of the farmers themselves.

There are certain measures that can help growers protect certain crops, mainly fruits. Apart from the irrigation of the trees, they use dark nets that limit the amount of sunshine and spray the trees with a special clay that prevents sunstroke, Holéciová explained.

The Slovak Agricultural and Food Chamber is aware of the potential consequences of the climate changes in agriculture, also in connection with the modernisation of irrigation systems.

Two years ago, SHMÚ reported the lowest degree of precipitation since the beginning of the 20th century, which means in a 115-year time.

“I see the lack of suitable utility water as the biggest danger both in the short and long-term, mainly in some regions of southern and eastern Slovakia,” climatologist Jozef Pecho from the Slovak Hydro-Meteorological Institute (SHMÚ) told the Denník N daily.

Lapin agrees, stating that a significant part of Slovakia will require overall change in crop and forest composition.

“This is quite a challenging task,” said Lapin. “Moreover, we have to count on the fact that climate change will carry on till 2100 and Slovakia will get warmer a further 2 or 4 degrees.”

Today, in the times of a changing climate, irrigation systems are an inevitable part of agricultural production in several regions of Slovakia, admitted Holéciová. Thus the first step should be modernisation and the support of already existing irrigation systems. Secondly, all farmers should have access to water resources.

“There are agricultural companies that are not in the vicinity of a lake, river or water reservoir and these have to rely on the weather, which is very risky in the current situation,” said Holéciová.