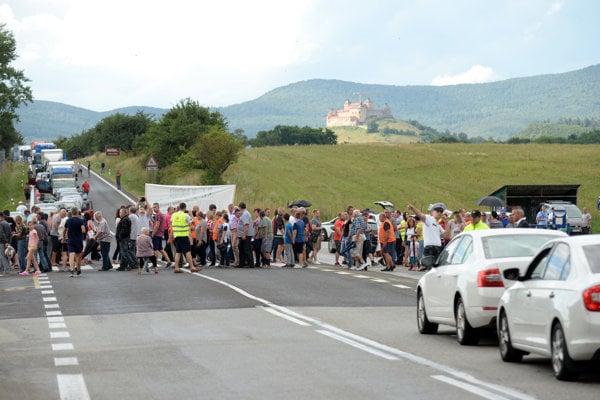 In Slovakia the construction of highways has become a synonym for development while politicians eagerly promise, especially before elections, the highways they will build if they are elected. So it did not surprise that the discussion became emotional when the Value for Money analytical team proposed a re-evaluation of the current R2 dual-carriage Zvolen-Košice road section construction project.

“I couldn’t care less about what some clerk thinks,” said Prime Minister and leader of the Smer party Robert Fico, as cited by the TASR newswire in response to the proposal of analysts to assess some cheaper variants for the R2. “It’s clear in the Government Manifesto, and it’s the duty of all of us who hold some sway over it, to make decisions that will deliver on this commitment.”

The construction of the R2 dual carriageway from Zvolen (Banská Bystrica Region) in the direction of Košice will continue as set out in the four-year programme of the current cabinet, the leaders of three coalition parties agreed on August 3.

“We’ve made clear our adherence to making good on the commitment enacted in the Government Manifesto to carry on with the construction of the R2 from Zvolen in the direction of Košice,” said Fico after talks with Slovak National Party (SNS) leader and Speaker of Parliament Andrej Danko and Most-Híd chairman Béla Bugár.

Construction Minister Árpád Érsek (Most-Híd) insists on building the Zvolen-Košice section of the R2 and Béla Bugár, head of Most-Híd, indicated that he would consider the slowing down or halting of the construction as a violation of the coalition agreement. It was Most-Híd that pushed it into the manifesto as it has many of its voters in this region.

The indications that the construction of the R2 will be halted also resulted in a rally held by local people near Rimavská Sobota, where the Soroška tunnel, part of the R2, should be built.

The Value for Money analytical team at the Finance Ministry sees a medialisation of the partial results of their analysis behind the emotional discussion about the completion of the R2.

“The Value for Money team does not want to halt the construction of the R2,” said Štefan Kišš, head of the analytical team, adding that they will continue searching for possible savings.

What is the R2

The network of express roads in Slovakia consists of highways, marked by D in their names, and dual carriageways, marked with R. Both types are primarily projected as four-lane roads, but some of their parameters differ, making the highways more comfortable. Then there are first, second and third category roads.

The R2 dual carriageway will run from close to the border with the Czech Republic to Košice after it is completed. In the west it will start in Trenčianska Turná where it will be connected to the cross country D1 highway from Bratislava to Košice. R2 will be 326 kilometres long. From these, 68 kilometres have been already built.

The Zvolen-Košice section crosses one of the least developed regions or so-called hungry valleys in Slovakia. It is about 230 km long. From these only about 40 km have been built so far. Thus it is still necessary to build almost 190 km. These are divided into about 20 individual stretches.

However, from these only one stretch is prepared for construction – the 11-km stretch from the village of Mýtna to the village of Lovinobaňa. The National Highway Company (NDS) is already preparing a tender to find the builder. The construction costs of this stretch are estimated at €350 million and already have been reduced.

The Construction Ministry is working on some other reductions on the original project for R2 completion. For example, the Soroška tunnel will have only one tube with two lanes instead of two tubes with four lanes as originally planned.

Projects for constructing the remaining stretches are in various preparation phases and far from completion. Also the government needs to find resources for their construction as there are not any new EU funds for road construction projected.

What the Value for Money analysts say

The Value for Money analytical team at the Finance Ministry is preparing an analysis on the completion of the planned R2 stretches. While it agrees that each region needs a safe and fast road, it also points out that this does not need to be necessarily the most expensive four-lane road. Money saved on construction may be invested into education or health care in the given region. For now it recommends also assessing other possibilities for the remaining stretches of the Zvolen-Košice section. These include building the stretches of the dual carriageway in half profile, i.e. with only two lanes, or extension of the existing first category two-lane road into four lanes and building the ring roads of towns and villages.

The basic parameters when assessing road construction are the future traffic density, i.e. how many cars will drive on the road, and construction costs, Štefan Kišš, head of the analytical team, wrote in his commentary for the Denník N.

A dual carriageway built in the half profile or first category four-lane road can handle about 20,000 cars per day. The NDS estimates that the traffic density on the Mýtna-Lovinobaňa stretch after 20 years will be 11,000 cars per day. Thus Kišš thinks that it would be enough to build this stretch in the half profile. This would save 30 percent or €115 million, which could be invested into the region’s development in other areas.

“The asphalt lobby has achieved a lot in Slovakia; a highway in a region has become a synonym of development,” writes Kišš. “Other topics, like schools, hospitals or tax burdens, have been pushed to the background.”

He agrees that an adequate road infrastructure is an inevitable precondition for the development of a region, as it reduces unemployment and draws investors. But he adds that an express way is not enough. It is also necessary to invest into people’s education as a recent study of the Institute for Financial Policy (IFP), a think tank at the Finance Ministry, has shown.

The analytical team will now complete the analysis and recommendations for the ministries and the government while it reiterated that it does not want to halt construction of the R2.

“The final decision will be up to the politicians,” said Kišš.

Ján Ďurišin, head of the National Highway Company, believes that after the Zvolen-Košice section of the R2 is completed, some cars driving from Bratislava to Košice via the D1 highway now will move to the R2.

“The current traffic density is low only because the roads are as they are there,” Ďurišin told the Pravda daily. He also added that the Sitina tunnel in Bratislava achieved a projected 20-year traffic density after only six years in operation.

He also points out that it is not possible to extend the existing first-category road in this region as it goes through a protected area.

Ľubomír Palčák from the Research Institute of Transport stated that when road infrastructure is being designed, estimated traffic and transportation needs for the next 30 years are taken into consideration.

Estimations of the future traffic density for the R2 are not known, according to Palčák. Right now the average daily traffic density on the Zvolen-Detva road is about 15,000 cars; Detva-Lučenec has about 10,000 cars; and from Lučenec eastward it is about 7,000 cars.

Palčák agrees that after the R2 is complete this southern route may become more attractive compared to the D1.

“I estimate that after the continual corridor is completed, the final density may vary, depending on individual stretches, between 10,000 and 15,000 vehicles per day,” said Palčák.