President Andrej Kiska handed over a state award to Píka at an event marking the 95th birthday of the man who fought in the Royal Air Force during World War II. 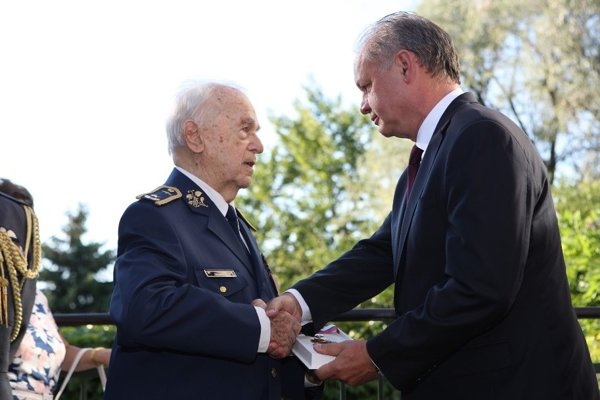 On August 30 Kiska bestowed the Order of Ľudovít Štúr 2nd-class on retired Brigadier General Milan Píka for his extraordinary contributions towards democracy and the protection of human rights and freedoms. He is one of the last living Czechoslovak officers who fought in the British Royal Air Force during World War II, the TASR newswire wrote.

The president later wrote on Facebook that Píka had been fighting against the Hitler army for five years. “However, he paradoxically fought his biggest battle after the war,” Kiska noted. “His father, a prominent Czech military officer and hero of World War I and II, Heliodor Píka, was executed by communists in a conspiracy trial with trumped-up charges,” he wrote.

Father and son spent their last night together in a prison cell. The executioner came at six in the morning and took the father to be hanged. The son was sent away. The communists who persecuted the legionaries of the western foreign resistance fight against the Nazis thus got rid of one Píka, and made the other one a second-rate citizen. The younger Píka also faced persecution by the communist party and was forced to leave Prague. He was not allowed to work, even as a labourer. He later moved to Bratislava, where he has been living to this day. Píka only managed to clear his father’s name after the fall of communism in 1989. Thanks to Milan, the world learned the truth about the sad story and execution of General Heliodor Píka.

Before the communists, the Nazis persecuted both Píkas.

Kiska thanked Milan Píka for his actions in fighting for freedom and truth. “Life posed tough obstacles before you but you have never given up, which makes you a real hero,” Kiska concluded.