Coalition leaders respect the Constitution but would readily amend it

The leaders of two coalition parties said for a televised political debate that they would like to amend the Constitutional; however, each of them has a different view of what should be changed. 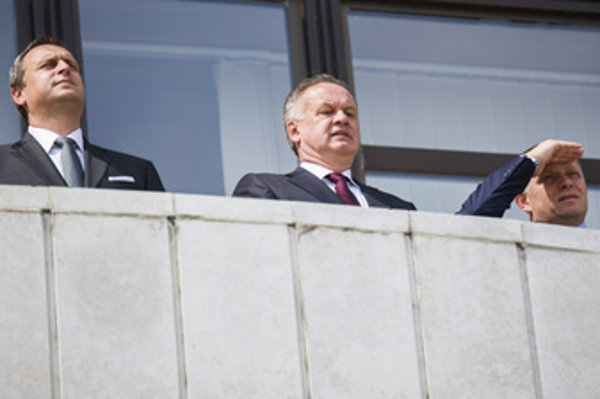 Meanwhile, he recalled the SNS’ bill from several months ago to grant constitutional protection to Slovak territory and also praised the constitutional ban on water exports approved three years ago.

The Constitution is the only document that may incorporate safeguards for rights and freedoms in areas in which Slovakia feels uncomfortable in relation to the European Union. “We do honour our EU membership and do our utmost to stand side-by-side with the leading countries, but there are issues, such as some legislation, that may affect our hunters,” Danko said. “If we don’t incorporate the right to carry weapons and the protection of land or water in the constitution, problems may arise when it comes to our functioning within the EU,” he said.

He went on to give great importance to the legal protection of marriage, adding that additional measures are needed to protect the family. To this end, he suggested that a Government council for the family should be set up and that a concept for the development of the family be drafted.

In addition, Danko admitted the importance of addressing problems that Roma encounter in finding a job due to their ethnicity. As far as the Roma population is concerned, he said that a number of issues arise stemming from their mentality, travelling for work and work habits, but he added that everything comes down to motivation.

“If the Labour Ministry were under my remit and if I had 76 MPs [i.e. enough MPs for a majority of votes] in Parliament, I would introduce the ‘Hungarian model’, according to which unemployment and welfare benefits come under the authority of local administration,” he said.

PM has other priorities

The challenges that lie ahead for the Slovak Constitution may in fact be even bigger than those at the time when the document was being drafted in 1992, Fico said, adding that he is aiming to launch a public discussion this autumn on how to better to enact economic, social and cultural rights in the Constitution. Changes may also occur due to Slovakia’s efforts at becoming a member of the future “core” of the European Union.

Thus, the PM echoed his own statement from September 1, when Slovakia celebrated the 25th anniversary of the Constitution’s adoption. He said he wants Slovakia to remain a democratic country and a country strong in terms of values and human rights, which should ultimately be reflected in the Constitution.

“There are some rights in the Constitution that aren’t directly enforceable, and I’m speaking of social and economic rights,” said Fico, adding that the discussion he is seeking in autumn will ultimately be intended to bring about better constitutional guarantees for social and economic rights. As an example of rights, he singled out the right to a minimum wage for every working person. There is also scope for discussion about overnight work and the status of women, the prime minister added.

“This is no marketing. The European Commission itself has put forward the idea for a European Pillar of Social Rights, so Europe itself wants us to be more social and closer to each other,” said the premier as quoted by TASR, rejecting the notion that political motivation is behind such efforts.

He would not comment on the idea expressed by Andrej Danko to enact the right to carry a firearm in the Constitution, but he conceded Smer’s support for the measures put forward by its partners.

The debate seems more to be part of the political campaigning before the November regional elections, agreed several Slovak media on citing both politicians.