Reconstruction works at Špitálska interrupted for two months at least

Works were temporarily halted due to dispute over the permission process 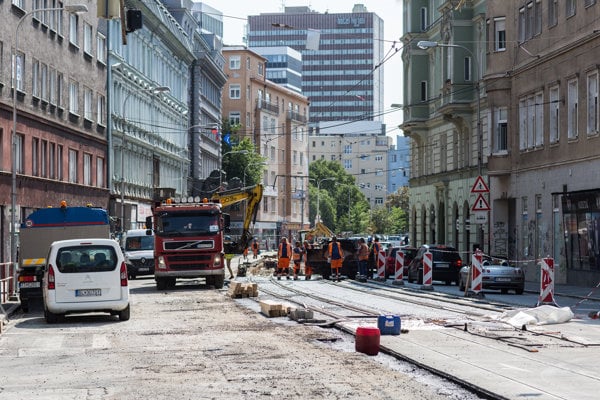 Reconstruction of the tram track on Špitálska Street in Bratislava’s Old Town borough will last longer than originally planned. This is because of a dispute between the Bratislava Self-governing Region (BSK) and the Transport Ministry over the permission proceedings. At the request of the ministry the works were interrupted on September 11, the TASR newswire reported.

Vladimír Dulla, expert in construction law and councillor for the Bratislava borough of Karlova Ves, estimates that the break in the work will last at least eight to nine weeks. Originally, they should have been completed in late October.

The city public transport company, Dopravný Podnik Bratislava (DPB) indicated that it will act very flexibly in the case of postponements.

“When there are mistakes, they must be removed,” said Alexander Sako of the DPB management. “I cannot imagine halting this construction before the winter.” 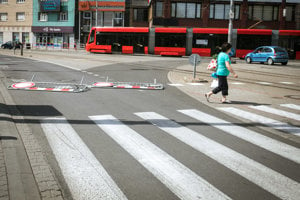 Adriana Volfová, DPB spokesperson, said that the company is dealing intensively with this case and holding negotiations.

The ministry claims that the reconstruction was not permitted in line with the law and that serious flaws occurred during the process. One of them is that the first-stage construction office did not include the appellants – owners of the neighbouring plot, among the participants of the proceedings, did not send them letters related to the project and did not deal with them as with the participants.

This mistake pertains to citizens of one house on Špitálska Street, who are complaining about the placement of the new tram stop. It should be built following the so-called Vienna-type, i.e. located directly in the street. It should be a bit elevated and distinguished by a red colour from the rest of the street. When there is no tram standing on it, cars may drive through it. Such a stop already exists in Bratislava – the Blumentálska stop.

But as the new stop is proposed to stand in front of the entrance to the courtyard of the house, this would mean that cars parking in its courtyard would have to go directly via the planned stop when leaving it, the Sme daily wrote.

In may happen that the tram-stop should be moved and built in a different place.

BSK disagrees with the objections of the ministry and claims that it held strictly to the law during all the related proceedings. It is now analysing the decision on which basis the construction permission was cancelled and the works halted.

Now the first-stage body has to re-negotiate the whole construction project with all involved and issue a new permit.

The reconstruction of the tram track on Špitálska Street in Bratislava’s Old Town borough started on August 1, affecting the public transport routes as well as car traffic. The works were expected to last three months, until October 29. The price tag of the project is €2.5 million without VAT.