Incidents against Muslims on the rise, the daily reports. 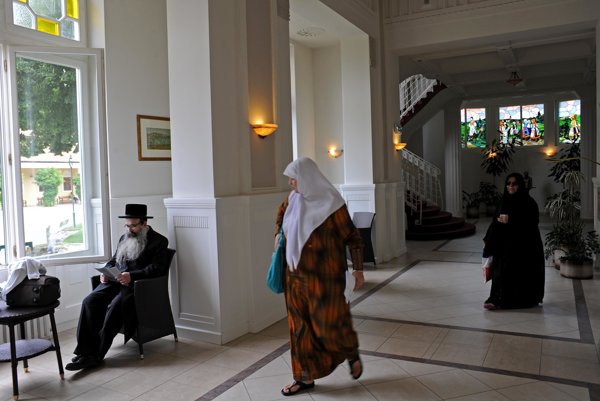 A spa is a place where nations can meet. (Source: Amanda Rivkin)
Font size:A-|A+  Comments disabled

Thousands of wealthy Arabs choose the spa town of Piešťany (Trnava Region) as a vacation destination every year. The town’s central pedestrian strip has turned into an unlikely panorama of Muslim women in traditional dress and men smoking hookahs outside kebab shops.

This has never been a problem for the town, until recently. This is mostly the result of the populism that has “swept” central Europe, fuelled by “a backlash against the refugee crisis”, now affecting “even this pampered cocoon of transnationalism that depends utterly on well-heeled visitors from abroad”, the New York Times daily reported.

The hint of menace has unnerved and surprised regular visitors, according to the daily that addressed one of them, Hassan al Mekhyal. He has been bringing his Kuwaiti family for years to Piešťany, where summer nights feel deliciously cool compared with the furnace back home.

“We like it here because of the peace and the quiet,” al Mekhyal told the New York Times, as his wife nodded in agreement, her eyes peering from a narrow slit in her face-covering niqab.

They described an incident at the local retail chain Tesco, where his wife was harassed by a young man, calling her names and telling her to go back home.

The daily also refers to the experiences of other visitors who have noticed the change. 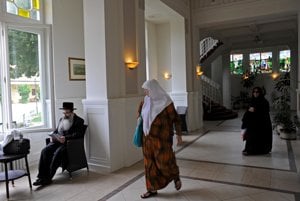 There had never been an ugly incident involving his Muslim customers, Ilknur Perda told the New York Times, as he gently sliced off juicy chunks of shwarma at his shop, Istanbul Doner-Kebab, on the town’s main strip.

But then one day last year, a local 22-year-old walked up and began berating the Muslims at the outdoor cafe tables.

“He was being very hateful,” Perda, who moved to Slovakia from Turkey, told the daily. “He got into a fight with one of the customers. Later that night, the guy came back and smashed all my windows.”

The incident was striking enough to make national news in Slovakia.

“The next morning, all my Slovak and Czech customers called me,” Perda said, as quoted by New York Times. A march was organised to support him. One local man planted a “tree of tolerance” just outside the kebab shop.

The local authorities confirm the change in the atmosphere.

“People are feeling more and more emboldened,” Eva Bereczová, the spokesperson of Piešťany, told New York Times. “They are unashamed to say things in public that they would have been ashamed to say before. And it’s probably going to get worse.”

Support of extremists on the rise

The daily also mentions that Slovakia regularly ranks near the bottom in a European Union polling of discriminatory attitudes toward foreigners and other ethnic groups. Moreover, the far-right People’s Party – Our Slovakia (ĽSNS) of Marian Kotleba, has two MPs originating from Piešťany. Right wing support is growing, according to the New York Times.

“They come to City Council meetings in their green shirts sometimes,” Bereczová told the daily. “Then they wanted to hold a meeting at our local cultural centre, but we put a stop to that.”

She is frequently surprised by the hidden support for the right wing.

“I went to the swimming pool with a friend and we met some other people,” Bereczová added. “Only after awhile, when politics came up, did I realise I was the only one who hadn’t voted for Kotleba. They insulted me for being naïve.”

“The only thing they want is to win an election,” he told the New York Times. “So people are getting bolder. They got a signal from the politicians that it’s O.K.”

He also pointed to a virtual campaign against Muslims that occurred on Facebook. The extremists are taking pictures of Muslims they see on the streets. Then they post them online as “proof” that the government has been lying about how many Muslims are in the country. Some of the pictures are badly doctored. The comments are frequently hateful, the daily reported.

Currently, only about 5,000 people in Slovakia claim to be Muslims. One of the few places where their presence is felt is Piešťany, as the New York Times wrote. The vast majority of them are visitors.

More than half of the 619,262 overnight stays last year in Piešťany were by visitors from other countries, tourism officials said.

The Piešťany Spa, which operates the town’s health facilities, broke down by nationality the guests who had stayed at its resorts last year.

Out of the 42,756 overnight stays, nearly 12,500 involved residents of Saudi Arabia, Kuwait, Lebanon and the United Arab Emirates. There were 1,674 more visitors from “other Asian countries,” which spa officials said were nearly all other parts of the Muslim world. Another large group, accounting for 6,858 nights, came from Israel, the New York Times reported.