Coalition only agrees on how to talk. But what will they talk about? 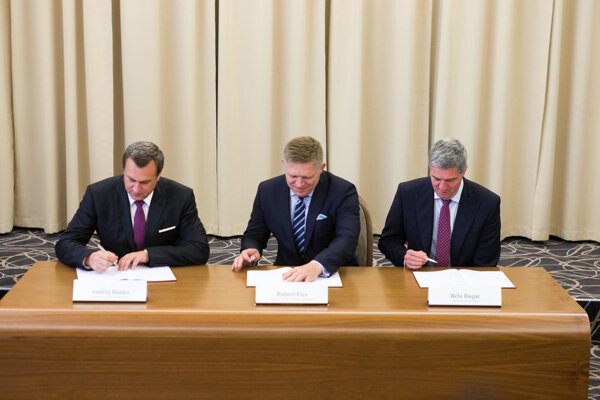 Will a revived national air carrier or bonus salaries resolve the differences among the leaders of the ruling coalition?

The coalition agreement addendum Robert Fico, Andrej Danko and Béla Bugár signed on September 11 does not answer that question. It only says that the leaders will regularly meet on Mondays, disclose their proposals to each other no later than 24 hours before the cabinet session, and put together regional and district coalition councils to facilitate better communication among Smer, the Slovak National Party (SNS) and Most-Híd.

These measures should put a definitive end to what Smer leader PM Fico insisted on calling a “communication crisis” rather than a coalition crisis.

“It was not a quarrel for positions, but a quarrel about communication methods,” SNS leader Danko also said, as quoted by the Sme daily.

After the new deal was signed, SNS introduced the new education minister, the recognised academician Martina Lubyová, to replace Peter Plavčan. The latter was forced to quit over a scandal related to the distribution of almost €600 million EU funds for research and science. Observers believe that the scandal was one of the issues that had caused tensions between SNS and Smer, one reason why SNS had considered voting out the Smer-nominated labour minister together with the opposition.

It was SNS leader Andrej Danko who started the crisis when he sent a letter to his coalition partners, withdrawing from their official agreement with the argument that they needed a new one.

But while he insisted that the new document should reflect the good numbers of the Slovak economy, there are no concrete economy-related policies outlined in the amended agreement which the leaders signed. Prime Minister Robert Fico said the proposals that have emerged in media reports over the past few weeks will depend on how the upcoming “very demanding” talks on the state budget go.

The SNS proposals include the revival of the state-owned air carrier that would provide regular flights between Bratislava, Poprad, and Košice; support for spas; and new rules for 13th and 14th salaries (no taxes and payroll taxes). The Smer-proposed measures include supplementary payments for work during nights and weekends, or an increase of the minimum wage.

While plans to introduce a national air company might not be a key concern of SNS voters, political analyst Pavol Baboš from the Comenius University school of political sciences believes the measures are an important signal “that the party cares about the prosperity of working people, national interests, and local or national businesses”.

Coalition leaders keep repeating that they are ready to stick together because there is no alternative to the ruling coalition. Their narrative of the crisis is that it was a lesson in communication.

“It is a compromise that will allow the coalition to continue working,” Baboš told The Slovak Spectator. “The important thing now is how the parties manage to explain to their voters what the conflict was about and why it needed to drag on for so long.”

Both Smer and SNS are trying to present the result of the conflict as their victory. The analyst noted that Danko highlights the programme prioritieshe is pushing, while Fico says he managed to stabilise the coalition.

Will they last though?

During the weeks the crisis lasted, Danko and his SNS threatened to bring the government down on several occasions. First it was the moment when Fico announced to the public that he wanted Plavčan to quit, without consulting Danko first. Most recently, SNS contemplated supporting an opposition motion to remove Labour Minister Ján Richter of Smer from his post. Voting with the opposition against a governmental minister would automatically mean the end of the government, according to the coalition agreement.

In the end the SNS MPs did not attend the vote, Richter staying put in his post and the coalition deal signed.

Observers now believe the coalition could stick together until the end of the election term in the spring of 2020. While the crisis most likely resulted in less trust in Andrej Danko in the eyes of his coalition partners, it might not necessarily mean a crisis like this would happen again, Baboš noted.

“Politics is not a place for new friendships, and the coalition is not a club of friends,” Baboš said, adding that now that Bugár and Fico know Danko might be willing to risk the future of the coalition, they might take his proposals more seriously.

Danko himself believes a change of attitude should come from Fico too.

“So far he has ruled alone. Now he has to see us as an equal partner,” Danko said before he signed the new deal.