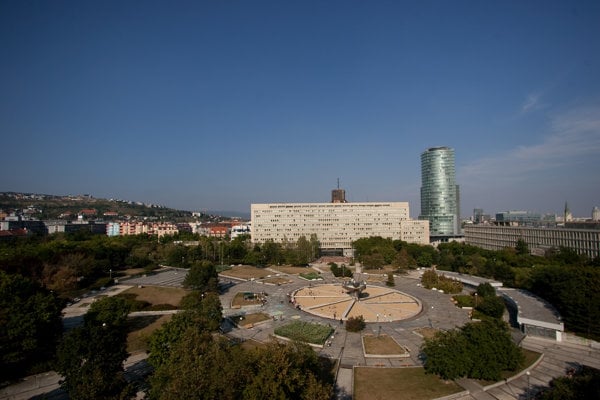 Námestie Slobody will be redesigned into a kind of living room in the city. (Source: Sme)
Font size:A-|A+

Námestie Slobody, or Freedom Square, is the biggest, and one of the most neglected squares in Bratislava. It is at last undergoing the revitalisation supposed to return life to it. Earlier this year the Bratislava city council removed graffiti and trimmed the greenery. Now it has announced an architectural tender for its redesign.

“Expectations for the future look of Námestie Slobody are high,” said Ingrid Konrad, chief architect of Bratislava and the expert guarantee of the tender. “This space, in the shape it is in now, especially with its symbol of the now non-functional fountain, is not meeting current requirements for public space.”

The square measuring about 5.4 hectares has been deteriorating for many years. The linden-flower shaped fountain in its middle was made out of order in 2007 due to its bad technical condition as well as the very high costs of its operation. In November 2015 the city council even installed warnings that one entered the park at one’s own risk.

The city council launched the gradual revitalisation of the square in late May in cooperation with the private company HB Reavis. In the first phase it trimmed the greenery, painted benches and removed graffiti. It included the preparations of documents for an architectural tender for its redesign. 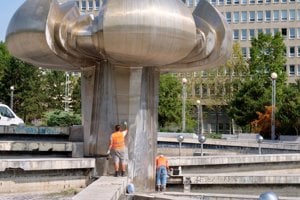 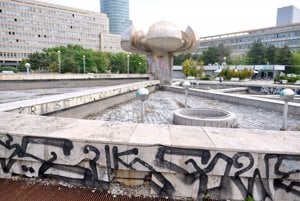 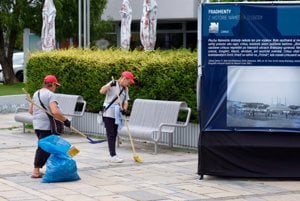 “We managed to get the square into the shape so that it no longer endangers the safety of visitors and which increases its aesthetic value,” said Bratislava Mayor Ivo Nesrovnal. “We are entering another phase and I believe that the tender will offer inventive quality proposals, which will return life to the biggest square in Bratislava.”

The tender was announced on September 7. The city council has invited Slovak as well as foreign architects to elaborate their ideas and proposals for redesigning the square and submitting them by the end of October. The jury will select the best designs by mid-November. The three top projects will be awarded €12,000, €8,000 and €5,000.

The tender should provide a future design concept for Námestie Slobody. Afterwards it will be worked out into an implementation project. The square will then be redesigned in 2018.

The tender was announced with an undertone of freedom.

“This square bore the name of [communist politician] Klement Gottwald until 1989 and it was afterwards renamed Freedom Square,” said Konrad. “But freedom is not apparent here yet. People, for example, can’t step on the green, they can’t enjoy it, there is no mobiliari.”

The city council wants the square to be a contemporary public space after the redesign. It should be safe and barrier-free, the costs for its revitalisation and maintenance sustainable. It should adapt to change of climate while its central urban space values should be highlighted. Its redesign should preserve its historical layers and increase its attractiveness.

Keeping the 12-tonne fountain, the biggest in the city, is one of the tender’s conditions. The city council wants the architects to come up with a solution sustainable in technical as well as financial terms.

The city is preparing the revitalisation in cooperation with the creators of the original design from the 1980s or their descendants and preservation experts. The square should maintain its original form, but it should transform into a kind of ’living room’ in the city. There should be new benches, lighting and relaxation elements. The elevated green areas should be barrier-free. Conditions for holding concerts as well as other cultural and social events should be created.

“It is funny, that when the designers of the square as we know it today prepared their proposal, they didn’t maintain the conditions of that period’s architectural tender,” recalled Konrad. “They won the project because they opened the square to other possibilities.”

How much will it cost?

HB Reavis has already allocated €0.5 million for the revitalisation project via the Dobré M(i)esto foundation. Its name is a play on words meaning Good Place/City.

The developer is currently very active in Bratislava. It has been building the brand new Stanica Nivy bus station and the business zone next to it. It also owns land on the Petržalka embankment of the Danube River where the new city borough of Nové Lido should be built. Its plan is to connect the Danube’s banks and its developments with a cable car. Now it is asking for the status on an important investment for its projects. It is seeking to simplify the approval process and speed up the construction of an approximately €1 billion package of development projects.

HB Reavis claims that it is not expecting anything from the city for its help with the square.

“We see it as social responsibility,” said Jakub Gossányi of HB Reavis.

The city council wants to also ask other big investors in the city for support and raise more money for the square’s revitalisation. It has itself already allocated €100,000 for the project and is ready to allocate the same amount next year.

The first revitalisation phase has cost more than €100,000.

For now Bratislava Mayor Ivo Nesrovnal is refusing to specify how much the city plans to invest in Námestie Slobody.

“This question is premature for now,” said Nesrovnal, adding that the cost of the redesign will be clearer after the architectural tender finishes.

Architect Martin Zaiček considers the architectural tender to be a step in the right direction, but he believes that a tender in the form of a workshop would be more beneficial. In his opinion a hastily organised tender in cooperation with a private company raises concerns whether there is enuine interest in helping with the square or if there is only the goal of winning political points and conducting some activity just for show.

“Such an important place deserves the very wide involvement of interested parties into the creation process,” Zaiček told The Slovak Spectator. “I firmly believe that architects would not be afraid to join the tender and utilise their expertise as well as knowledge to offer solutions for this place.”

During the Middle Ages there used to be vineyards. They were turned into a training area for soldiers in the 16th century. Only the 17th century construction of the Archbishop palace, now the seat of the Government Office, launched the transformation of this area into one of the biggest squares in central Europe.

Námestie Slobody used to be at the periphery of Bratislava until the 20th century and hosted several special events. In 1897, Slovak engineer Ján Bahýľ took off on a helicopter of his own design from this location.. In the 1920s the square served for launching a balloon often used for the promotion of companies and their products. Circuses used this empty place for their shows. 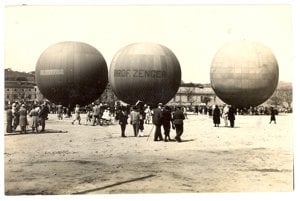 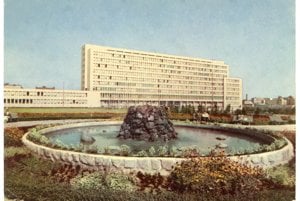 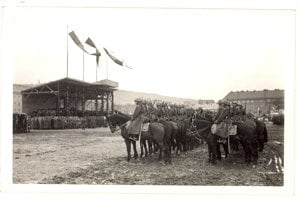 During the so-called first Czechoslovak Republic (1918-1938) the construction of the main governmental building for the Slovak part of the republic was planned. But this plan did not materialise. In the times of the Slovak Republic (1938-1945), a satellite of Nazi Germany, there was promulgated an international architectonic tender for a governmental centre. The Slovak fascist regime planned on building an extensive complex of governmental buildings and the seat of the ruling Hlinka’s Slovak People’s Party with a monumental place for the party’s congresses and military marches, recalled Zaiček.

In the end the current composition of the square with surrounding university buildings and a ministry from the 1940s-1960s roughly follows the design of the participating Italian architects Ernesto Bruno La Padula and Adalbert Libera.

Virgil Droppa and Juraj Hlavica are the architects of the present-day look of the square with a centrally located fountain originally called the Flower of Friendship by Juraj Hovorka. A huge, 6.8-m high sculpture of Klement Gottwald was later added, the so-called workers’ first president of communist Czechoslovakia. The sculpture was removed by a blast after the fall of the regime in 1989.

“These days the square is actually a park, a popular resting place for students of the universities flanking the square,” said Zaiček, adding that this fact has created tension between the square’s administrator, i.e. the city, and its users.