For the first time since the tax scandal was publicised, President Kiska has clearly said he is sorry. Afterwards, PM Fico hinted that Kiska had tried to influence the police in this case. 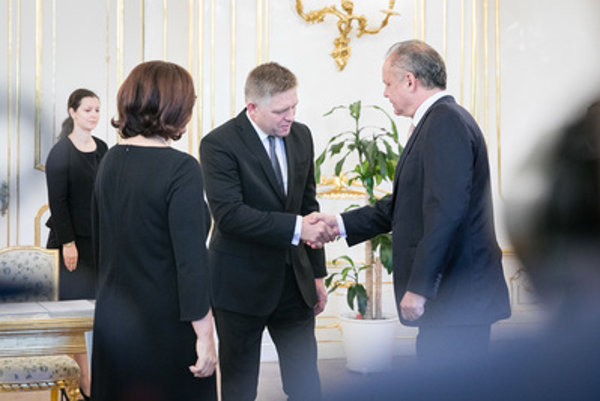 Slovak President Andrej Kiska stated on the public channel RTVS’ political programme O 5 Minút 12 (5 Minutes to 12) that he was sorry if he disappointed anyone. He repeatedly expressed regret concerning his tax scandal involving his company Kiska Travel Agency (KTAG), which included his presidential campaign costs in its expenses, the Sme daily reported. In 2015, it had to additionally pay €27,000 more in taxes.

“I’m sorry that I may have disappointed someone, and I apologise for that,” the president said, as quoted by Sme.

He went on to say that he should have been more consistent when preparing the contract with his and his brother’s company, KTAG, as well as with the accounting. Kiska used KTAG to fund his presidential campaign.

“I would have done it differently now, but I trusted the accountant at that time,” he explained, as quoted by the TASR newswire, adding that when the tax office had a different opinion on how individual accounting items should have been recorded, KTAG subsequently paid the tax owed, including fines.

The step and its implications

This means a great shift in the president’s argumentation, Sme wrote. Until now, he has explained the tax discrepancies, for example, with a different opinion of his accountants and the tax office regarding some parts of the law.

In the past weeks, he also stated that the case was a form of political fight against him, since he is the most popular politician and discloses scandals connected with the ruling coalition.

Kiska explained the change in his attitude on October 1 with a certain self-reflection. He added he did it because he may have disappointed some people whom he respected, naming, for example, the head of ethics watchdog Transparency International Slovensko, Gabriel Šípoš.

“This is a minor step towards assuming responsibility,” Šípoš reacted, as cited by Sme. He would felt that it was appropriate for the president apologised instead, TIS head added.

The president’s name is allegedly involved in another scandal, in which he should testify soon before Prešov investigators. His name is said to have been abused in wheedling money out of some people, Kiska told the Trend weekly, in an attempt to precede another anonymous information leak from state bodies. Kiska feels it is better if he himself offers this information first.

Meanwhile, head of ethics watchdog Fair-Play Alliance Zuzana Wienk commented on the KTAG’s tax case for the RTVS political talk show, saying that Prime Minister Robert Fico knew about the tax audit at a company co-owned by Kiska as early as in August, i.e. before someone anonymously leaked the confidential information in September. She added that Fico spoke about Kiska’s tax-related issue during a working meeting concerning a bill on whistleblowers, in which she participated.

After the president slammed the state bodies for leaking confidential information, and after Wienk’s comment, implied that Kiska tried to handle his VAT refund problem with the police.

The president himself told him about it last year at the government-owned Bôrik hotel in Bratislava.

“He told me that he had turned to a representative active in the criminal proceeding who was present there, to help him arrange the VAT-related matter in his and his brother’s firm,” Fico claimed, as cited by Sme.

The tax office last year did not state the firm’s VAT refunds for April and it had to pay a fine of €15,000. The police, however, stopped the investigation since it failed to prove that there had been a bad intention behind it.

At the meeting Fico allegedly described Kiska as a tax fraudster who cannot be trusted, Wienk said on the RTVS talk show. Fico also did not agree with a proposal that the head of the Office for the Protection of Whistleblowers should be appointed by the president. Wienk said that confidential information protected by the law is being misused in a political fight.

At a briefing, Fico told journalists that Wienk is Kiska’s friend and supposes they have conspired against him. He rejected her accusations as well.

Asked about whether all this will influence his future decision on remaining in politics, Kiska said that recent circumstances have made him want to continue fighting.

“I’ll be here as long as people trust me,” he said, as quoted by TASR, adding that if something serious emerges he has no problem assuming personal political responsibility.

“Unfortunately, if I had merely a suspicion that in the case of this information leak was a misuse of state power, from today I have no doubts about this," Kiska reacted to Fico’s words for Sme.