Gothic Art of Spiš and Liptov on visit to Bratislava

The current exhibition at the national gallery focuses on an unknown master of art from the Middle Ages, who is known only by the style of his work. The exhibition needed detective work to trace down and piece together parts of his art that no longer are together 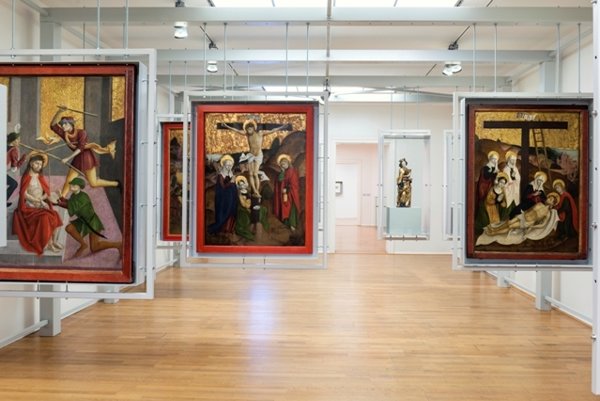 The items stem not just from its own deposit but also from a collection of Gothic works in a Slovak church, the Hungarian national gallery and private collections.

The Master of Okoličné and the works from his workshop are the focus of the current exhibition in the Esterházy Palace in Bratislava. The exhibit also includes an altar from a village close to Okoličné, Smrečany. The exhibition is completed with some Gothic works of art from the region of Spiš where Master Pavol of Levoča especially stood out as a representative of this style.

“We tried to present an artist whose name is not known to us; thus, the title Master of Okoličné, as well as an altar which in reality does not exist,” curator Dušan Buran said at a lecture of the exhibition.

Buran went on to explain that the Master of Okoličné (a village in the Liptov area in northern Slovakia) and his disciples can be determined and detected only by the results and style of their work. Unlike the better-known Master Pavol of Levoča, no biographical facts are known about the Master of Okoličné, not to mention his students or assistants from his workshop/studio.

The non-existent altar as a puzzle

“We managed to collect all existing and available parts of the former altar of the monastery church in Okoličné, which was disassembled already in the 18th century and replaced by a baroque one,” Buran explained. “In the roughly 170 years since then, the parts have been scattered to many places, some have been lost and many were found in poor physical state.” The parts have been preserved in several collections in Slovakia, Poland and Hungary.

The master of the former Marian altar from the Franciscan monastery in Okoličné near Liptovský Mikuláš ranks among the best painters of the central-European late gothic era, the Slovak National Gallery (SNG) wrote about the focal personality of the exhibition, adding that he worked with other important Spiš sculptors, including Master Pavol. 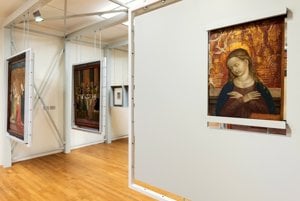 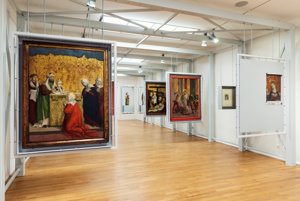 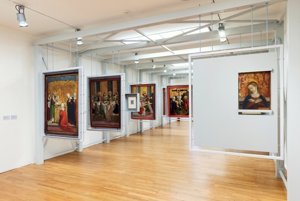 The unknown Master’s work remains relatively unknown and the exhibition, lasting until November 26, is one of the rare opportunities to learn about him. Most paintings by the Master of Okoličné stand out by an attractive synthesis of Dutch gothic art and Italian Renaissance. The artist maintained an efficient studio, which produced other excellent works. His work today is mostly church property (two side altars in Smrečany, 1510 and painting of the Altar of the Visitation in St. Elisabeth Cathedral in Košice 1516).

SNG succeeded in acquiring one of the panels of the Okoličné altar in 2010, that of the Crucifixion. The recent completion of its restoration by Petra Hoffstädterová was an incentive to organise this exhibition.

The layout for the “Master of Okoličné and Gothic Art of Spiš around 1500” exhibition is quite unusual; apart from protecting the precious items, it also tries to present the artworks in a way easy to understand, even for an unschooled viewer.

Besides an analytical exhibition on the second floor of the Esterházy Palace containing about 40-50 gothic artefacts – altar triptychs, panels, sculptures and prints – it also includes the presentation of new knowledge from the restoration of the altar and the historical research directly in Okoličné, as well as a blueprint of the Okličné monastery church as it may have looked in the time of the Middle Ages when it was built. 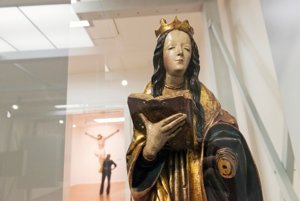 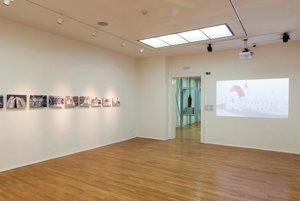 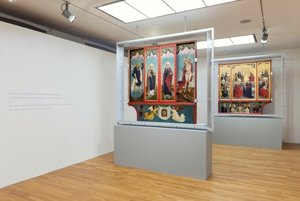 The exhibition is accompanied by a catalogue (in Slovak) with several essays on the architecture of the monastery church and its original altar, as well as on noble families from Okoličné and Smrečany. There are also contributions by conservators and dendrologists. The publication also includes an annotated catalogue of the exhibited works, or more precisely, of all available works by Master of Okoličné, according to SNG.

“The altar from the monastery church in Okoličné was by its size, which we managed to re-assess, among the biggest made in the region of Spiš around 1500,” Buran noted. “The only bigger ones were the famous main altar of Master Pavol from Levoča in the Levoča parish church, a similar altar which was probably placed in the Holy Cross Church in Kežmarok, and in the Marian parish church in the nearby village of Ľubica.”

The current exhibition representing the gothic art from Spiš can be visited for free daily except for Mondays until November 26, on the 2nd floor of the Esterházy Palace in Ľ. Štúr Square in Bratislava.