Bring your own package? A new kind of shopping comes to Slovakia too

Zero-waste shopping is not an easy undertaking in Slovakia, but shops following the idea have recently emerged and are slowly gaining popularity. 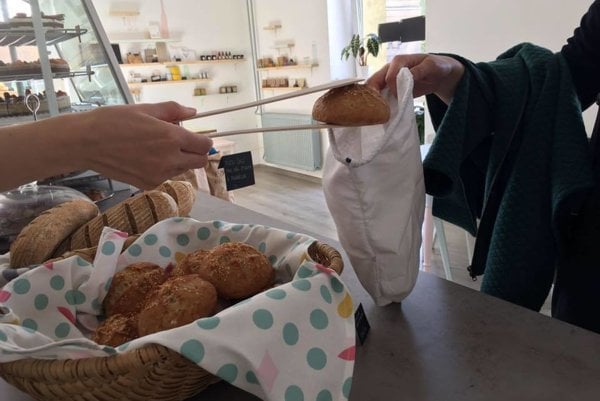 That is one way people go about their grocery shopping in Slovakia. The consequences are obvious: Slovaks produced almost 2.5 million tonnes of municipal waste in 2016, data from the Statistics Office show. Slovakia also lags behind the European average in recycling, with only Malta ranking worse in the Eurostat chart. Slovakia recycled 14.9 percent of municipal waste in 2015, compared with the EU average of 45 percent.

Some people think beyond recycling, though. They try to avoid producing any waste at all. This does not necessarily mean radically changing one’s lifestyle. Small steps are appreciated as well.

“Bring your own bags to the store and say no when asked if you want a bag,” Matúš Zvalo and Dada Zvalová from the package-free shop U Dobrožrúta in Bratislava told The Slovak Spectator.

Their shop was the first zero-waste shop to open in Bratislava in May 2017. They started off as a bakery, but in cooperation with a package-free online shop, they now offer products such as rice, nuts and dried fruits.

Use the zero-waste map to search for possibilities of package-free shopping near your home. Available only in Slovak or Czech.

Since then, zero-waste shops where you can buy foods or chemist’s products and use your own reusable case or packet have come to Slovakia. Their main idea is to eliminate wrapping that can be used only once and decrease the amount of plastics.

Matúš and Dada say they started off by minimising waste in their own household, later in food production. Finally they opened their shop. They document their experience on the Dobrožrúti food blog (which can be translated as Goodeaters).

Their shop attracts different kinds of customers, they say.

“Mums with children, men in suits, older retired women, often foreigners,” say Matúš and Dada, listing the types of people who usually come to pick up something to eat.