As part of their regional elections campaign, chair of the far-right ĽSNS party handed out cheques with a symbolic sum again, as well as opening an ice-hockey match to the huge surprise of players and audiences. 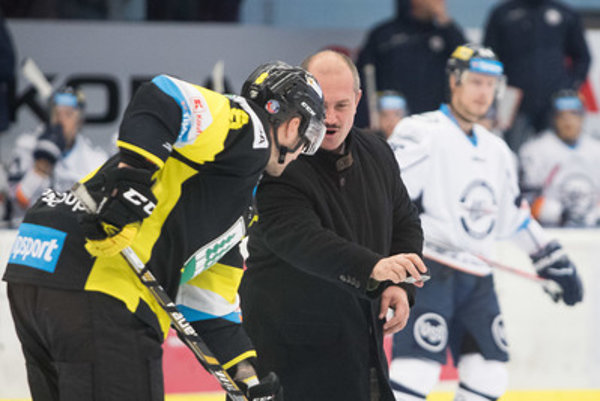 Chair of the far-right People’s Party – Our Slovakia (ĽSNS) Marian Kotleba had handed over cheques amounting to €1,488 to the disabled in the past, and now, shortly before the regional election in which he is running again for regional governor in Banská Bystrica Region, he has done it again.

This time, he gave a cheque to young ice hockey players, the Denník N daily wrote on October 10.

Following the incident with the disabled, the police charged Kotleba with supporting movements directed at the suppression of rights and freedoms, as the amount clearly refers to Nazi symbolism. Even before the charges were laid out, the Banská Bystrica Region’s office led by Kotleba as governor offered the same amount to the ice hockey club in Veľký Krtíš in early June. The club’s president Igor Talpaš said he asked the office for €1,500 to support the children. Instead, he received a contract with a proposed subsidy at €1,488, he said. The money was spent to buy helmets, new jerseys and nets, according to Denník N.

In another incident, the ice hockey club in Detva helped Kotleba and ĽSNS with campaigning. It seems that the extremists running in the regional elections have found ways to enter the top ice hockey competition in Slovakia, Tipsport League, the Pravda daily wrote.

Read also:Regional elections will be a power test for the far right in SlovakiaRead more

During a match in Detva against Košice, the honorary opening puck was thrown out by Marian Kotleba.

The captains of both teams, Jozef Sládek and Ladislav Nagy, shook hands with him. After the media, fans and even the Slovak Ice Hockey Association (SZĽH) slammed the incident, former and current ice hockey players defended the (non)reaction of the captains by explaining that before a match, the players are nervous and unable to assess an unexpected situation accordingly. Detva player Lukáš Novák stressed that nobody had informed them of this planned opening.

The blame is clearly with someone else, the Sme daily wrote, adding that the manager of the HC 07 Orin Detva hockey club, Róbert Ľupták, known as aggressive and boorish, and already punished for hooliganism towards the players as well as hockey officials, is the main initiator of this unfair and unethical event.

Both SZĽH and Tipsport League managements criticised the club, deeming the event as unethical.

“We perceive this incident very sensitively, also due to the upcoming regional elections,” head of Tipsport Liga Richard Lintner said, as cited by Sme. “It is reprehensible for Slovak sports and ice hockey to be abused for political goals.”

The competition’s management has apologised for the incident and perceives it as a failure of the Detva club’s leaders. Ľupták did not react directly, only apologised through the Tipsport Liga management.

However, neither him, nor the Detva club will probably be punished for enabling Kotleba’s political promotion.