One lawyer does not mean all EU lawyers; immigrants attacking a shepherd dog and HAARP causing hurricanes in the US are hoaxes, too. 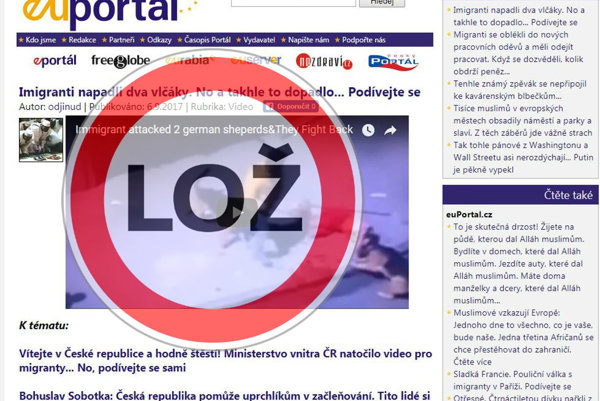 The recent internet story which claimed that the annexation of Crimea by Russia is legal, that in fact it was not annexation but an autonomous decision, is ascribed to “lawyers of the European Union”. It received hundreds, maybe thousands, of reactions although the post is in line with the Russian view of the situation and ignores the fact that the referendum on self-determination was organised only after the Russian army invaded Crimea. 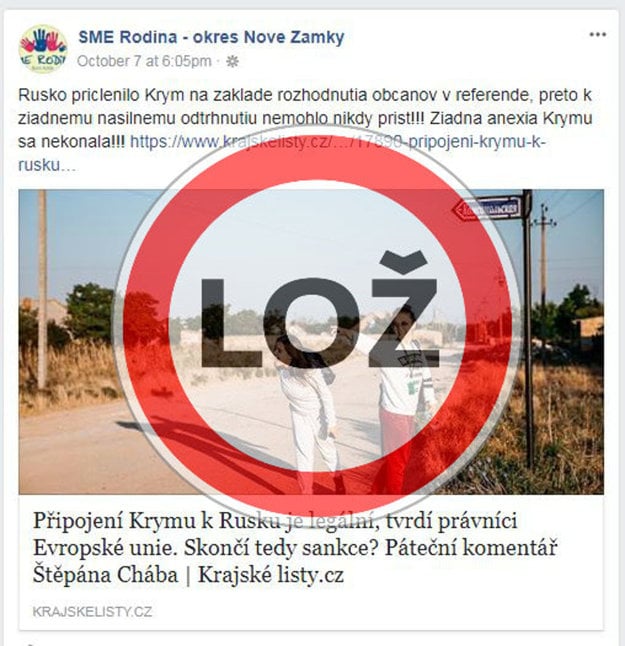 The story, which was also posted on Facebook by the Nové Zámky branch of the Sme Rodina party of Boris Kollár, became the focus of the manipulatori.cz website, which discloses and clarifies internet hoaxes.

Manipulatori.cz notes that this story is based on a real analysis – which is authored by lawyer Christian de Fouloy, head of the Association of Accredited Lawyers for Relations with Public Bodies of the EU (AALEP). AALEP is a lobby, non-profit organisation that has nothing in common with EU bodies. EU lobbyist Oleg Rumyantsev, a Russian professor and advisor of the federal Russian service for intellectual property, appears on its website. Thus, this analysis is the work of a single lobbyist group connected to Kremlin, rather than that of “EU lawyers”.

An old video with a deceiving headline became the hit of disinformation websites.

The video now spreading on websites (e.g. Megazine.cz, Euportal.cz and foreign sites) and social networks claims that two immigrants attacked two German shepherds, who then bite one of them badly.

English subtitles on YouTube state that the two are immigrants in Europe.

The videos appeared on Czech servers beginning in September 2017 and on YouTube in 2016. However, this video can be also found dated April 24, 2013. The headline of the original video ties it to Casablanca in Morocco, and a still older video is dated to April 23, 2013 on the Liveleak.com website. This and the date hint that the incident has nothing to do with the migration crisis in Europe.

The Czech websites spreading the video are openly “spreading politically incorrect opinions”, and are full of nationalist, xenophobic and anti-Western materials.

Hurricanes in America are created by HAARP, new hoax claims

Globalists issues and orders for geo-engineers to cause absolute shock and fear in America, with artificial hurricanes Harvey and Irma.

This sentence is from a story on the Czech disinformation website Tadesco.cz, but it is not the only internet source spreading conspiracy theories surrounding the recent hurricane season in the Atlantic. Several Facebook groups have spread a link to a British story on Yournewswire.com, which writes that famous scientist Michio Kaku has confirmed that HAARP was behind both hurricanes. 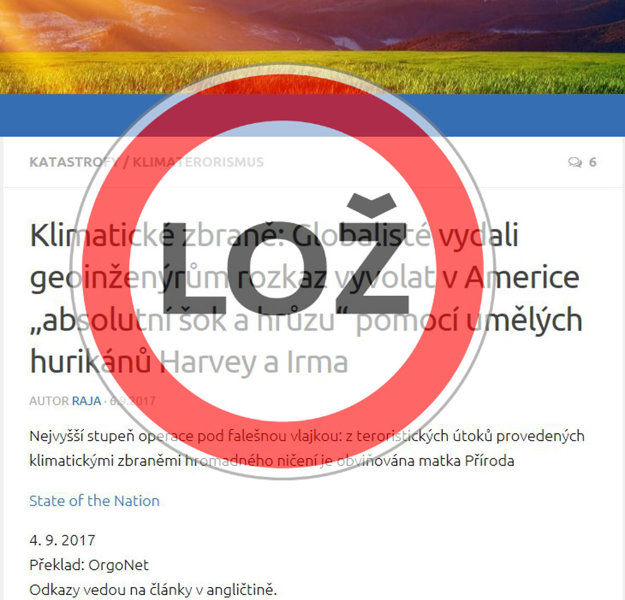 Both stories are lies, however: Yournewswire wrote that Kaku confirmed in an interview for the CBS that HAARP was behind the current series of hurricanes. The interview video meant to prove this is over one year old (dated October 21, 2016) and the author writes that it dates back to 2013. Moreover, the HAARP system is not even mentioned in the interview; Kaku only talks about laboratories trying to impact weather with laser beams and notes that technologies to influence weather, e.g. to bring about rain, already exist.

The Tadesco.cz story is even worse, as it accuses unspecified “globalists”, “geo-engineers” or the new world order of influencing weather. Moreover, it makes claims like, “Currently, everyone knows that Harvey was artificially directed at the Texas coast, and we can believe that Irma, similarly, will also be navigated to a specific target”.

Citing an unknown authority and ad populum argument (“currently, everyone knows”) belong among classic logical mistakes that strive to add trustworthiness to information without citing a specific source.

HAARP has inspired many conspiracy theories, despite not officially functioning since 2014. It was launched in 1990 as a project to research the qualities of the ionosphere. Even now, conspiracy theories attribute it to natural disasters like earthquakes or extreme weather.

Although HAARP had strong transmitters, they were not strong enough to impact weather and were still too weak when compared to natural sources like lightning.