Richter: Revision on posted workers is a compromise 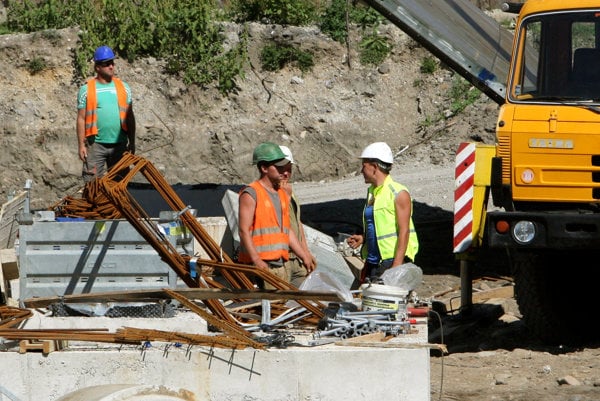 At first Slovakia was one of the eleven EU member countries that triggered the yellow card procedure to block changes the European Commission proposed to 21-year-old posted worker rules. After some agreed compromises Slovak Labour Minister Ján Richter voted for tightening rules on posted workers in Luxembourg on October 23.

“I consider the reached compromise to be good because on one side it will put pressure on increasing the wages of Slovak workers and on the other hand it still will not endanger the competitiveness of Slovak companies,” said Richter.

After some 12 hours of negotiations in Luxembourg, most of the EU’s 28 members backed a compromise that would cap the posting of workers abroad at 18 months and introduce a four-year transition between reaching a final agreement on the reform and its taking effect. They further agreed to exempt international road transport from the revision.

The major objective of the directive’s reform is to have “equal pay for equal work at an equal place of work”. It is being pushed through by some established EU member countries criticising the current posting scheme. They accuse new member countries of social dumping, pointing out that since the latest enlargement round in 2007, labour cost differentials between member countries with the highest and the lowest wage level have increased from 1:3 to 1:10. Thus they require the introduction of a rule based on which posted workers should receive equal pay for equal work in the same workplace.

Richter praised the exclusion of the transport sector from the regulation and the four-year transition period. Another compromise was the extension of the cap to 18 months (a 12-month cap with a possible six-month extension), while the original proposal was 12 months.

“I see a cap of 18 months as sufficient since the average duration of the secondment of Slovak workers was 52 and 53 in the last two years,” said Richter.

From the Visegrad Group countries only Slovakia and the Czech Republic voted for the reform. The remaining two countries, Hungary and Poland, voted against. Lithuania and Latvia did not vote for the changed rules either, while Ireland, Britain and Croatia abstained from voting.

Slovak companies and employers worry that the proposed change will cost them their current competitive edge.

The Federation of Employers’ Associations (AZZZ) perceives the existing difference between the wage levels of established and new EU member countries as one of a few competitive advantages which remained for Slovakia. It is also of the opinion that the task of the EU is not to regulate the amount and method of remunerating employees. This should be left to the bargaining of employees with employers, either individually or via collective agreements.

The National Union of Employers (RÚZ) believes that applying the principle of equal remuneration is at odds with the principles of the single market, which is one of the basic pillars of the European Union while differences in wage costs represent a legitimate element of economic competition.

“Moreover, the discussion about differences in the flexibility of the labour market and regulation of the minimum wage continues to remain a marginal topic,” said Martin Hošták of RÚZ.

Radoslav Maxin of AZZZ sees the four-year transition period as too short for Slovak companies to catch up with western companies.

“Slovak companies generate gross domestic product somewhere around 75 percent of the EU average,” Maxin said for the Slovak Radio, adding that they will be not able to get to 100 percent in four years and thus be equal with their western peers. As a consequence it may happen that a German company would opt for a German supplier rather than for a Slovak one when there would be no advantage of cheaper workers from Slovakia.

There are actually two draft revisions to the rules on posted workers, one by the EU labour and social affairs ministers and the second one by European lawmakers. The European Parliament’s Employment and Social Affairs Committee adopted its stance on the matter on October 16. The main difference between the two stances is the duration of the secondments. While the committee proposes to cap it at 24 months, the ministers compromised on a 12-month cap with a possible six-month extension.

Now the EP negotiation team can start talks with EU ministers about the final wording of the revision. Talks are expected to start in November. The final text must then be approved by the EP as well as the Council.