After the strong wind causes chaos and damage on October 29, more warnings were issued for several of Slovakia's regions for the next day. 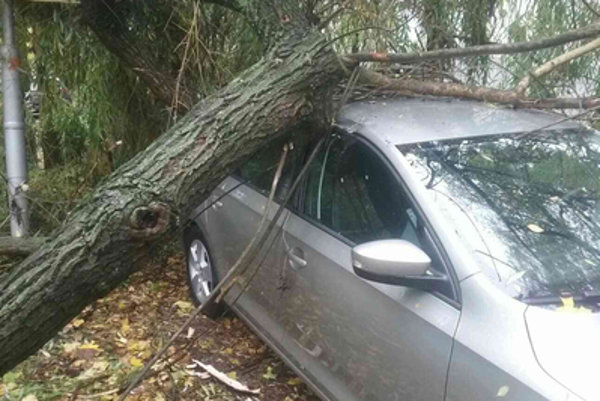 Strong winds have hindered the operation of trains, tumbling trees that either fell onto the tracks in some places or damaged overhead power lines.

“The situation with the blocked lines has been addressed since the morning [of October 29] in seven sections, mostly located in western Slovakia,” spokesperson of the ŽSR railway infrastructure owner Martina Pavliková told the TASR newswire.

“No one suffered any injuries,” Pavliková said, as quoted by TASR.

Members of the Firefighter and Emergency Corps (HaZZ) have been busy since October 29 morning due to the strong winds that have battered Slovakia, going out on more than 120 calls, Zuzana Farkašová of HaZZ said, as cited by TASR.

“Fire-fighters have been needed most in the Trenčín and Trnava regions, since there were more than 25 emergencies,” Farkašová specified for TASR. “These concern predominantly fallen trees and torn roofs.”

Fire-fighters were also despatched to Senica (Trnava Region), where a house's roof was blown off and fell on parked cars below. In Trenčín, the winds damaged the building of the city indoor swimming pool, which had to be closed down until further notice.

A roof was also torn off a nursery and primary school building in the Bratislava borough of Lamač, with the street closed off by fire-fighters.

Another emergency situation caused by the extremely strong winds was that of numerous power blackouts, especially in western Slovakia. A number of locations have been left without electricity, energy utility Západoslovenská Distribučná (ZDIS) reported on its website. The most afflicted areas were Bratislava, Senica, Dunajská Streda (both Trnava Region), Trenčín, Partizánske (both Trenčín Region), Nitra and Komárno (both Nitra Region), according to the website. 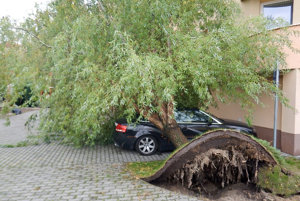 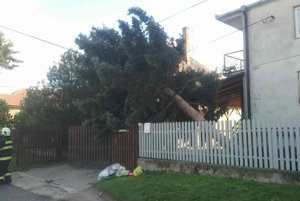 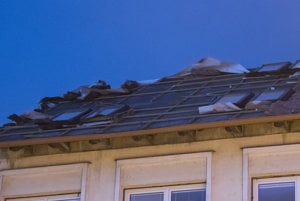 Cemeteries in Bratislava were also closed (despite the holiday of All Saints and All Souls coming soon, on November 1 and 2) due to falling trees on October 29, but most of them opened the next day.

Overall, both professional fire-fighters and volunteers were busy for more than 10 hours, clearing the damage caused by the extremely strong winds that battered most of Slovakia, TASR learnt from Farkašová. More than 800 fire-fighters attended to about 490 emergencies on that day.

“Most emergencies occurred in Trenčín Region where 180 fire-fighters went out on 60 various calls,” said the spokesperson, as quoted by TASR, adding that fire-fighters from Trnava Region were summoned in 40 cases, in Nitra Region 30 times, in Bratislava Region 25, in Banská Bystrica Region 21, in Žilina Region 18, in Košice Region 8 and in Prešov Region five times.

“Fire-fighters were most often called to remove fallen trees blocking state roads and endangering parked cars,” Farkašová said, as quoted by TASR. “In some places, the trees that fell on electric power lines caused blackouts lasting for hours.”

Unlike in the Czech Republic and Poland, the winds claimed no lives in Slovakia.

Strong wind is being reported for Slovakia for October 30, with the western, northern and central part of the country being affected the most. Snowfalls and snowdrifts on the roads may occur in the mountains, TASR cited the website of the Slovak Hydrometeorological Institute (SHMÚ), which also issued a warning.

A windstorm may occur in the High Tatras and its vicinity. Meteorologists are forecasting the wind speed there at 30 - 37 metres/second (i.e. 110-135 km/hour), which means a windstorm.

The warning has been issued for all Monday, while for October 31, no warnings have been reported as of now.