The inventor of water-propelled car was not poisoned, and yes, eliminating genders in the EU is a hoax

Disinformers dusted off the old myth about alternative car propulsion and the death of its inventor, while others spread the rumour of human genders being eliminated. 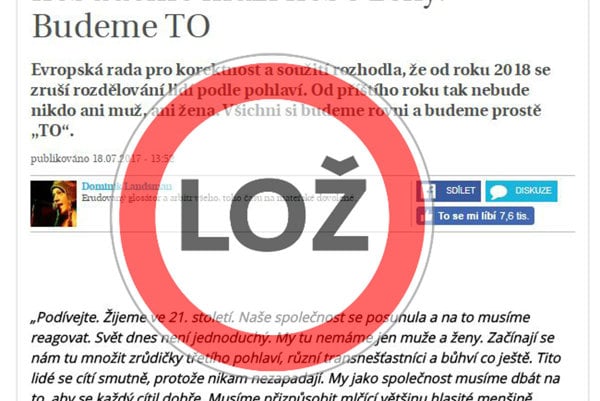 Humans' genders will be cancelled is a hoax. (Source: SME/Facebook)
Font size:A-|A+

The inventor of the water-propelled car was not poisoned

“I was poisoned!” US inventor Stanley Meyer cried, running out of a restaurant where he negotiated with investors. He died soon afterwards. His break-through invention – the water-propelled car – thus never became produced en mass. Corporations deny it and media keep mysteriously silent.

Although Stanley Meyer is a real person who died in 1998, the story on his mysterious death has recently been published by the Czech disinformation website AC24.cz, and it also has dozens of likes on Facebook.

The truth is that his “water-propelled car” is very questionable and would defy the rules of physics.

Meyer claimed that he managed to transform a common car to have a propulsion system that uses water instead of petrol – while the water was decomposed "by a special form of electrolyses" into hydrogen and oxygen. Hydrogen was then used as fuel, with water being the waste. 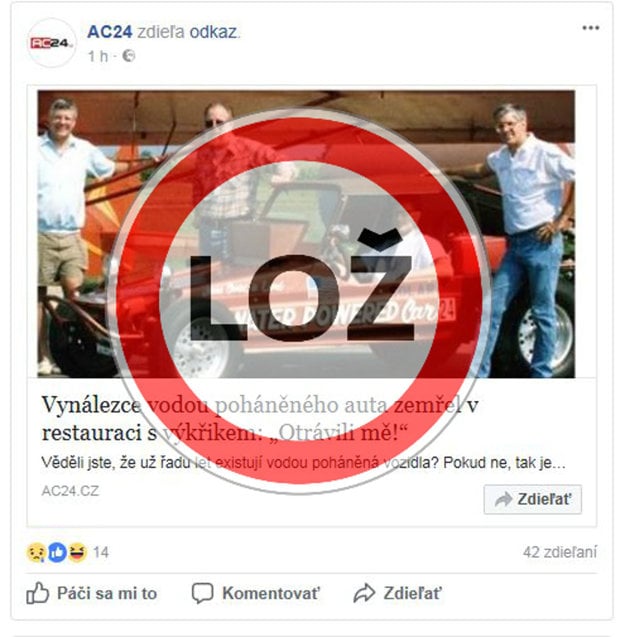 The snag is that electrolyses is very demanding from the point of view of energy, and storing highly explosive hydrogen is not something for amateurs to do. The encyclopaedia states that if Meyer’s fuel really worked according to his specifications, it would in fact be a perpetuum mobile, which would defy the first and second rules of thermo-dynamics.

Meyer managed to attract investors for his invention, until two of them sued him in 1996: he was ordered to compensate them financially. The inventor died in 1998, and his brother claims he ran out of a restaurant and claimed he was poisoned. In fact, Meyer had long suffered from high blood pressure and died of a brain aneurysm.

Erasing human genders in Europe is a hoax

This story, on the border between satire and hoax, earned thousands of likes.

The European Council for Correctness and Coexistence decided that beginning in 2018, dividing people according to genders will be stopped. Starting next year, nobody will be a man or a woman. We will all be equal, and we will simply be “it”, Czech website g.cz wrote, while some other websites quoted it. The g.cz Facebook account alone has 7,600 likes.

The story quotes an alleged chairman of the Council, Emanuelle Irglis, who depicts the dissatisfaction of various trans-wretches and “monsters” claiming to be the third gender.

It is necessary for the silent majority to adapt to the loud minority, the story reads, adding that the “Ladies and Gentlemen” address in the London underground will be cancelled. Several people allegedly welcome this step, like Margarit Xanono – allegedly a man in male body feeling like a man in a female body whose problem was solved by surgery replacing his genitals with a cowbell. Also Franz Gudrun, the man who became a stilling mother and chairman of the Union of Fathers Who Have the Right to Be Mothers, approves of it.

The European Council for Correctness and Coexistence does not exist, and its chairman is also a fictitious person. (Emmanuelle is a female first name, moreover). Margarit Xanono is a completely invented identity, and the photo of this alleged man/woman shows a trans-gender woman from Australia named Taylor. Franz Gudrun, on the other hand, is the name of several real people, male and female alike, but there is no connection between this name and the photograph published on the g.cz website.

However, the abolition of the traditional address in the announcements of the London tube is true. In July 2017, CNN reported it, adding that instead of "ladies and gentlemen", the gender-neutral "everyone" will be used.

The story is clearly something between a satire and a hoax and evoked a lot of hatred on social networks. The author, Dominik Landsman, was not available for comments.

In Slovakia, sympathisers of the extremist ĽSNS party spread the story eagerly.