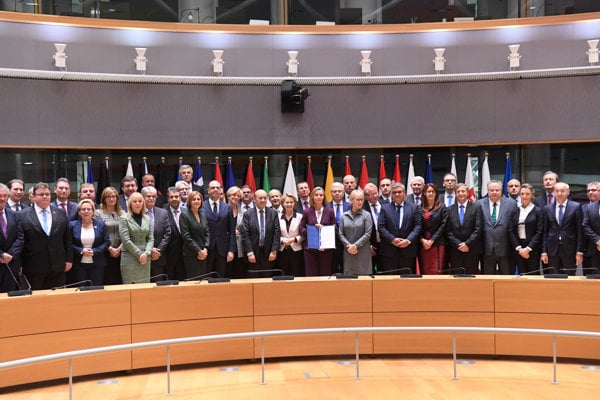 Membership of the Permanent Structured Cooperation (PESCO) initiative will present an opportunity for Slovakia to bolster its defence capabilities, both for national purposes and in meeting its international commitments, said Defence Minister Peter Gajdoš (a Slovak National Party/SNS nominee) who signed an intention for Slovakia to join PESCO along with State Secretary for Foreign and European Affairs, Ivan Korčok, in Brussels on November 13.

PESCO membership will also bring closer cooperation with the militaries of other EU members. Gajdoš and Korčok received a mandate to sign the agreement from the government on November 8, the TASR newswire reported.

A total of 23 EU-member states have joined PESCO so far, with membership optional. Whereas Ireland, Portugal and Malta have not yet decided whether to join the initiative, Denmark and the United Kingdom are not expected to participate.

“The Slovak Armed Forces are currently preparing a number of important modernisation projects, an endeavour that will call for great determination on our part,” said Gajdoš as cited by TASR. “PESCO creates leeway for using these forces in a more streamlined manner, such as in research and development and the joint procurement of military equipment.

The first project that Slovakia would like to develop via PESCO is indirect fire support, which is slated to be presented as early as this week at an expert seminar in Brussels.

“It has clear outlines, so we’re confident that it will garner significant support,” said Gajdoš, who hopes to draw resources from the newly created European Defence Fund for its budgeting, with an eye towards cutting the financial onus that it will put on Bratislava.

The creation of PESCO is said to represent the greatest improvement in EU defence policy in recent decades, with the benefit being shared costs of EU military operations, joint investments in procuring military capacities and the modernisation of military infrastructure.

PESCO will not compete with NATO, as the latter specialises in collective defence, whereas bolstered defence cooperation among Europeans is designed to ensure that the EU can respond to various situations abroad in a more prompt and efficient manner, claim European diplomats.