Officially, the number of forests in Slovakia keeps growing but satellite shots of the national parks evoke horrors. 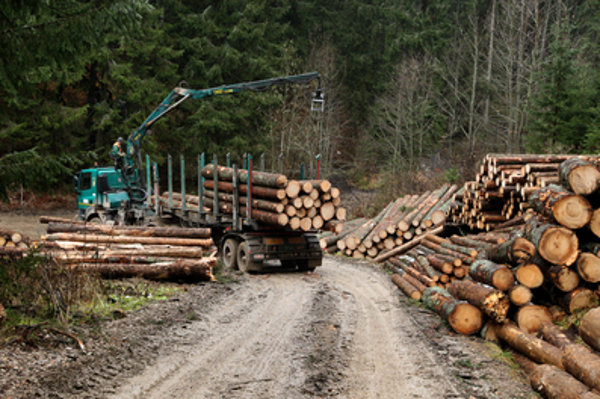 In the protected bird area on the fringe of the Muránska Planina plane, the tourist season has ended. The tourist trail which has also been included among official cycling routes seems hardly passable; deep trenches left by heavy vehicles and logging machines, as well as abundant mud make you wonder how on earth tourists on bicycles could pass it. Even a car without four-wheel drive would not take you very far.

Muránska Planina is one of the areas where hefty logging has started recently. The reason? A catastrophic bark-beetle outbreak. Foresters say that trees fallen after a windstorm and also those infested by bark-beetle are a threat to forests. By logging the affected trees, they want to prevent the beetles from reproducing and spreading.

“The fight against bark-beetle is a fight lost from the very beginning,” says environmentalist Jerguš Tesák who currently works as a freelance zoologist and fights for the preservation of a rare species of bird, the heather cock, or Western capercaillie. He explains that the bark-beetle infestation is so wide-spread today that with the current approach, it can end with most adult spruce growths in protected areas being logged.

The view of some of the hills of the Low Tatras is lamentable. Many of their lower slopes are literally shaved off, most visibly near Čertovica. Currently, there is intense logging near the Kráľova Hoľa (hoľa meaning cleared area) and in many other places in the national parks as well. Tesák explains that the problem is not so much the logging itself as the fact that it goes on in the national parks. “In commercial forests, it is OK,” the protectionist says. “But why then do the national parks exist at all?”

His off-road car wades through the muddy surface as close to the hilltop as possible but he has to stop the car soon. Instead of birds singing, one can hear the sound of a chain-saw, ever more and more strongly. “Beware, wood is transported here,” a sign near the road warns. “Are cyclists supposed to turn around and return back from here?” Tesák is annoyed. The signs warning people or banning them from entering become more frequent.

A part of a totally cleared slope can be seen. At higher altitudes, the situation is allegedly worse. We cannot drive anymore, we must walk instead.

Beside the road, there are piles of wood, prepared to be transported to the nearby railway station. From there, they will travel mostly to the Ružomberok paper mill.

“These are all healthy trees,” environmentalist Michal Wiezik from the Technical University in Zvolen points to the heaps of round timber. Only now and then, he finds spruces really infested with bark-beetle.

“In this way, the whole forest will be gradually logged,” Tesák shakes his head. Even though the territory of the national parks is under third level protection, it is not a problem for the foresters.

“The administrator of the forest is obliged in the interest of forest protection to urgently conduct random logging, so that pests do not become overpopulated,” the Agriculture Ministry’s spokesman Michal Feik writes. There are no permissions needed but in the case that a large amount is to be logged, foresters must report this to the due office.