The French American actor/director, who plays in a Slovak co-production film, said during a recent visit to Bratislava that eastern Europe, and other eastern countries still have what America has already and what western Europe is losing: the morality of art. 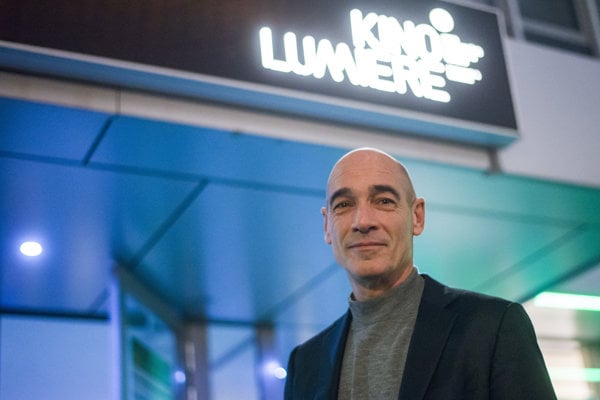 Jean-Marc Barr, who rose to fame thanks to the thriller The Big Blue by French Luc Besson, believes that is the case for him.

Barr, who also acted in Danish director Lars von Trier’s movies, recently visited Bratislava as a juror of feature films at the International Film Festival (IFF) Bratislava and also presented the movie “Grain” that he made with Turkish director Semih Kaplanoglu. In this black and white post-apocalyptic sci-fi, Barr plays an expert of genetic engineering. He was very keen on personally presenting the work, together with another actor from the movie, Bosnian Ermin Bravo.

Barr is very willing to cooperate with central and eastern-European, or even Greek and Turkish filmmakers.

“One thing that has been preserved here, which I understand as sacred and which I do not see anymore in my culture – there is not much culture in fact in what we did in America – is real morality,” Barr noted at the discussion following the film screening and also during the masterclass he held at the IFF Bratislava in mid November.

“I was lucky enough to make movies in Serbia, Poland, Turkey and Greece – as well as in Slovakia – and I had the privilege to experience these influences,” Barr said.

What the East has over the West

The son of a French mother and US father, Barr studied at the London Guildhall School of Music and Drama where he met his future wife, Irina Dečermič of the former Yugoslavia. He met her at a time when “I could return back home, live easily with my middle-class family in San Diego, smoke pot and skateboard”, as he laughed at the masterclass.

“Instead, I came with her to Yugoslavia and got to know excellent theatre actors (her father was a great actor), as well as excellent actors from the movies of Emir Kusturica back in the 1980s and 1990s,” he explained, adding that she “opened the door for me to the east – which was completely prohibited for an American at that time.”

In eastern Europe, Barr discovered what he calls the morality and ethics that have never been in the United States.

Since then, he has rarely starred in an American movie. Instead, he was cast in several Lars von Trier films (Europe, Dancer in the Dark, Breaking the Waves, Dogville, Nymfphomaniac) and directed – with Pascal Arnold – a film trilogy.

During his visit to Bratislava, he also praised film festivals that still keep their focus on the old art of acting. He noted he came to like Grain – a film made on analog rather than digital film– as soon as he read the script.

The ups and downs of idealism in art

Barr originally wanted to be a priest, he mentioned at the masterclass, and added that even later, when he turned to acting, he considered an actor to be a priest, because serious actors are concerned about what they are portraying and the story they are telling.

“So I suppose I was idealistic and I kept that idealism,” he commented, adding that the background he came from was a “joker in his pocket”. He has always been aware that he could have returned to San Diego if he needed to.

“I maintained this philosophy throughout the rest of my career. It has allowed me to say what I think, to feel free in my spirit,” he said and claimed that he it´s okay if he doesn´t become a millonaire like many of his colleagues.

“For some reason, I found that it would take my creativity,” he mused. “I remember Steve Jobs saying in his commencement speech at Stanford “stay foolish, and stay hungry” and for me, that is essential for an artist today.”

Jean-Marc Barr was shooting in Slovakia this May and June, with the Russian director Igor Voloshin. He said that while he spoke his role in English and his counterpart, Russian actress Olga Simonova, in Russian, the rest of the cast were Czechs and Slovaks: Jana Oľhová, Ján Mistrík, Csongor Kassai, Noël Czuczor, Roman Skamene, and Zuzana Vejvodová.

“We are all different personalities trying to make a common product and because these spices come from so many different places, there is a true originality that grows from that,” he noted about the film The Cellar, to be screened next year.

Barr got the role after he accidentally ran into Voloshin, whom he met a decade prior, at the Karlovy Vary film festival, he told The Slovak Spectator. Voloshin was just offered the position of director, and he called Barr some 10 days later, saying he considered him the right person for the role.

“I accept role offers, as I don’t get that many of them,” he explained. “I play against the game – by which you eliminate a lot of possibilities.”