Gilden: Take the negative and make a positive from it

The works of New York native, photographer Bruce Gilden, who has worked for five decades in the streets of the biggest cities, are on exhibit in the Kunsthalle (House of Arts) in Bratislava within the Month of Photography 2017. 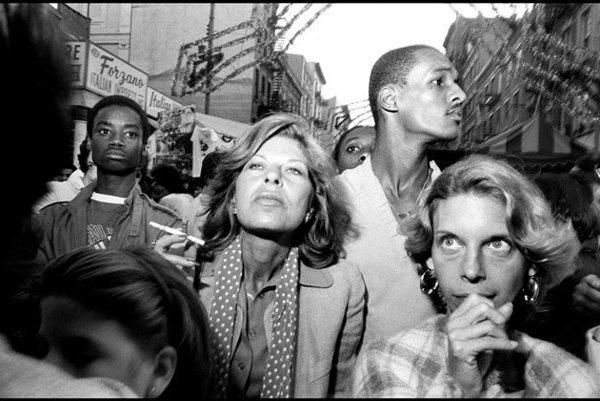 Bruce Gilden's first exhibition in this region after decades, the legendary black-and-white series “Beautiful Catastrophe”, will be open for the public (as part of the 27th edition of the photography festival) until November 29. The name of the exhibition is a quote from architect Le Corbusier about New York. The collection contains strong, sincere portraits made “very close” in person. In an online interview, he answered talked to the Fotonoviny (Photo-news) magazine about his current Bratislava exhibition, as well as about his work more generally.

Fotonoviny (FN): How close are you to the people portrayed now, to tell their true story?

Bruce Gilden (BG): Nobody knows if it is true story; it is my story. I am a pretty good judge of characters. We all have our own truth. Somebody can look at the world a certain way, somebody looks at the world another way. I am very close now, because of the fact I am doing not only, but a lot of portraits…

But my quote was actually meant for the candid work, so the canvas was smaller, I had less and less background. The closer you are, the stronger is an image visually, but just because you are close does not mean you take a good picture. If you are far away from the subject, it is not a good picture, but of course, if you have great style then it is. There are no rules or regulations.

For me – for example – when I go through a contact sheet I see a picture that looks OK, then I went a few feet closer, that picture was always stronger, and usually better and so I adapted that style for myself, for my pictures.

FN: You changed from black-and-white analogue photography all the way to colour digital photography, and extremely close portraits. How did you discover your remarkable style?

BG: When I started photography, I learned from looking at magazines and books. If I saw something I liked, I tried to figure out what lens the person used, and where the person stood to take a picture. Of course, I am fortunate that I always knew what interested me in photography… I knew I liked characters, people that are little different, people that have a lot of experience. That’s why I do not photograph too many young people – I am not interested.

As I got older I obviously kept getting ever closer, because I became more and more demanding. And I also had much better control of the camera. I was a pretty good athlete so I had a very good mobility, I was able to do this in candid situations. When people were moving fast in the crowd I was able to isolate them where I wanted. If you look at my contact sheets, most of the pictures are wonderful, but they are formed well, I had good balance… It is not important if anybody likes them or not… I do not care if people do not like the subjects I choose... I won’t photograph people that don’t interest me, I would not photograph a person in a Rolls Royce, or something like that.

FN: How do you perceive your subjects?

BG: I am doing interviews with them, you have to read all people in their environment, it has nothing to do with photography. Rather, it has to do with how to come into the due area. Everything comes from my childhood, and I can have a lot at my parents, but they gave me the strength that I have as an artist. If I hadn’t had that, I would not be able to make the pictures I do. So you have to always take the negative and make a positive from it, or you can stay at your house and complain about it. That’s why I am compassionate, but not foolishly compassionate; if I can make it, you can also make it. And that makes me tough in a way, makes me tough outside even though I am very soft inside. 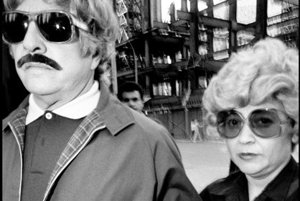 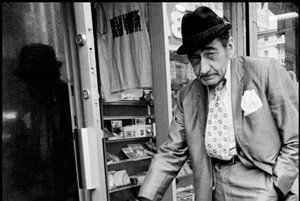 About his style of work, Gilden said, “It is not how close you are, and it is not about if you use a flash, it is how you move, how you are…to me, someone who takes a picture from 25 feet away is more sneaky, I do not trust him”. He continued to say that sometimes he is so close that people do not even realise he is taking pictures.

About his favourite picture from the Beautiful Catastrophe series, he observed that “there are lot of pictures I like. One guy with the gray suit, that’s a very beautiful picture, very traditional, and it is quite a simple story.. I saw a guy who was on the next block, I saw him walking, and nobody dressed like that in 1982, and his move was very extraordinary, that was the picture.” He continued to say that there are a few he really likes – “4 and 5, 6,7 and 8 are great – and the rest are OK…” Asked why he exhibits the photos that are not perfect, he said that people think that everything has to be perfect but you never get to perfection: “If I say 4-5 it means I really, really mean it….but if I go through anybody’s work, how many pictures do they have in a series which are really good”? He added that he meant not “just OK” pictures but those really top ones.

“I give a lot of workshops,” Gilden said, “and I have learnt how to be critical, how to do it – the psychology cause – it starts with you… The title of one of my workshop was: Be yourself, that’s it. You cannot be somebody else. You have to be able to feel where are you strong and weak, and where you should go.”

Gilden also recalled his last visit to Czechoslovakia – in 1969 – in Brno and Prague: “It was the anniversary of the iconic demonstration, and I was taking pictures on the square with long hair and a black long coat, looking really weird, and the secret police came in a Škoda car, they grabbed me and put me in the car,” he told Fotonoviny. “I said I am not going, and three guys got me and put me in the car, and I was trying to get out of the car and they sprayed me, and they took me to a cell, and they try me… After many hours, I came out as my girlfriend who was with me found a guy who was Brazilian but who spoke Czech somehow. They put me in the room and they asked me to sign a confession that I was throwing rocks at the police. I refused to, but the translator said “Just say you were throwing rocks because they are going to write it anyway”. So the funny part was that they let me out, and they gave me a paper from jail with a police warning, to get my film back, and they let me stay in the country….That was my experience. I was very young, 21, and had never traveled before in foreign countries.”