Why Slovaks should start fearing the Czechs 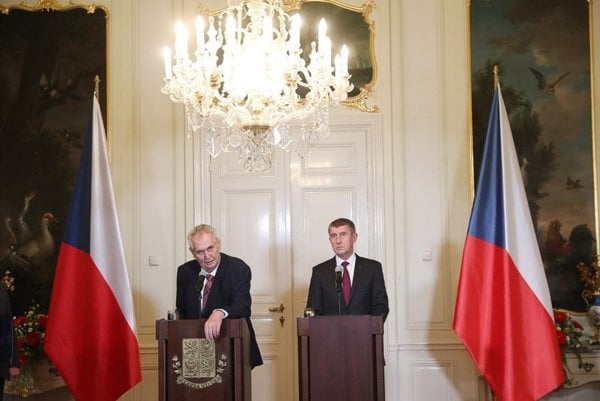 Political somersaults in the Czech Republic can easily threaten Slovakia. If the presidential elections and government formation in Prague take a wilder turn, the country beneath the Tatra mountains will become the last island of liberal democracy in a region full of "strange" regimes resistant to the European Union. According to Paris, Brussels and Berlin, we have a problem in the continental east.

In mid-November, the founding session of the new Czech parliament took place. Chairman of the winning ANO party, Andrej Babiš, put together a cabinet while President Miloš Zeman dominated the presidential campaign before the first round of the 2018 elections.

Since its establishment 25 years ago, the Czech Republic has never been so close to an anti-democratic split.

Babiš leads cabinet negotiations differently from all other prime ministers, both in the Czech Republic and Slovakia. In Slovakia, PM Robert Fico progressed from the 2016 general election to parliament without the support of the SNS, Most-Híd and Sieť parties.These actions are repetitive, furthering the idea that several Smer party members have: with good ministers and an amazing manifesto, surely others will have to support us.

A different methodology is followed in the Czech Republic where parties like the communist KSČM and Sloboda a Priama Demokracia (Freedom and Direct Democracy) of Tomio Okamura are in parliament. (Together with ANO, they have a comfortable majority of 115 votes). These parties have serious problems with democracy but a huge appetite for occupying the cabinet.

Thus, the Czech Republic can get a one-party cabinet consisting of Andrej Babiš and gain trust along with a budget approved by undisclosed coalition partners, KSČM and Okamura.

The price of this trade will be high. So far, Babiš has promised taxation of churches’ restitution which, in turn, will replace the heads of the secret service along with the president, general prosecutor, dozens of key offices, and heads of big state companies like ČEZ (power utility), Lesy ČR (state forests), and České dráhy (state railways). This procedure of a thousand executive steps will switch the country into an autocratic company regime. To do this, Babiš does not need parliament, the Senate or the Constitutional Court, subsidies that would surely prevent Babiš's unconstitutional dreams from coming true.

Andrej Babiš has the biggest conflict of interests in central Europe (his trust fund includes the huge Agrofert group which has a big media division). He is a registered agent of the communist-era secret service, ŠtB, and was criminally prosecuted due to suspicion of subsidy fraud surrounding his Čapí Hnízdo resort (he gained immunity through the election, on which the parliament will decide). Italian press nicknamed him “Babisconi”, citing their infamous ex-PM, Silvio Berlusconi.

Partying with Zeman and Okamura

Czech president Miloš Zeman, on the other hand, resembles US President Donald Trump. The influential news website Politico wrote a story about him with the headline, Anti-Havel of the Czech Republic: “He is foul-tongued, provocative and unabashedly politically incorrect, often accused of racism and cynical opportunism…”

Zeman is most dangerous in his efforts to turn the Czech Republic to the east. He collaborates with Putin and works to remove sanctions against Russia, imposed after the Russian annexation of Crimea. Thus, the Czech president is acting in conflict with the EU and Czech policy. Recently, he proposed the Ukraine should swap Crimea – whose conquest is a flagrant violation of international law and was condemned by the whole civilised world – for oil and gas supplies.

It's hard to tell if Zeman is more concerned about Czech or Russian interests. He speaks scornfully of the EU.

Moreover, let us imagine that at the end of the cabinet’s mandate (in 2021) neither Europe nor the Czech Republic experience strong economic growth with low unemployment rates and good salaries, but rather crisis; people will become angry and desperate, losing jobs in the hundreds of thousands. Who, then, will win the next election? A worst version of today’s Okamura? Or some kind of a Czech Kotleba?

The victory of Andrej Babiš and Miloš Zeman's probable re-election are proof that traditional political parties like ČSSD, the People’s Party, TOP 09 of Kalousek and Schwarzenberg, and part of ODS have failed. They failed in the general election and also failed to match Zeman with a widely supported candidate.

“If Babiš and Zeman start changing the Czech Republic following in the footsteps of Orbán and Kaczynski, the European politicians and western-European public will mix everything into some kind of eastern part of the old continent, from where only bad news come. A sort of new Balkans…”

This is strikingly different to Slovakia, where opposition parties managed to reach agreement before the regional elections.