The draft budget will be decided upon at a parliamentary session on December 5; but already experts and even the EC note that the cabinet is not reducing the deficit as they promised, and they keep lowering targets. 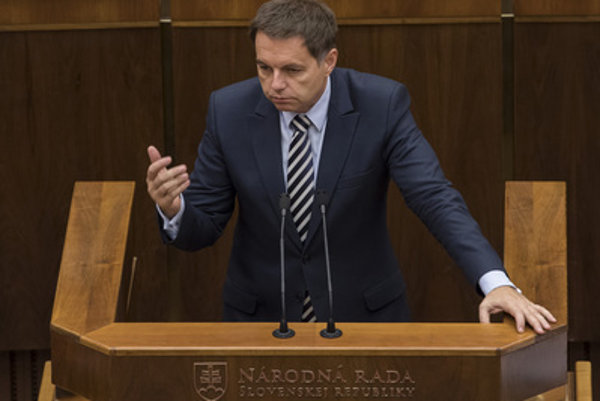 The parliamentary finance and budgetary committee on November 28 ultimately approved the draft state budget for the next year. Parliament will start discussing it on the afternoon of December 5.

The Finance Ministry is counting on a decline of the debt as well as deficit in the upcoming years, the TASR newswire wrote. A balanced budget is expected by 2020. The responsible finance committee has thus approved targets set by the government in the draft state budget.

Slovakia sent a budget to the European Commission that was not realistic. Already when it was sent out it was clear that our income or expense, as well as the deficit, would finally be different, the Sme daily reported. The Finance Ministry led by Peter Kažimír did not include a number of legislative changes in the budget draft.

The EC has pointed out that the government is not reducing the deficit as it planned in the budget a year ago. It also noticed that the deficit amounts written in the state budget and in the stability program document, the basis for Kažimír when creating every new budget, are different.

Apart from the warning in the report, Slovakia seems not to be threatened by anything because of the change in the numbers.

This year, the EC pointed out these differences in figures in its evaluation of the state budgets of EU members. The EC included the budgetary plans of Slovakia in a group of countries that generally fulfil the budgetary rules of the EU for 2018, but which could “lead to a certain deviation from their medium-term budgetary goal”, Sme reported. Along with Slovakia, the budgets of countries like Estonia, Ireland, Cyprus and Malta were evaluated in this manner.

On the contrary, the group of countries that absolutely fulfil the budgetary rules for this year are Germany, Lativa, Lithuania, Luxembourg, Finland and the Netherlands.

The Finance Ministry in its draft public administration budget for 2018-2020 envisages a gradual consolidation of public finances with a plan to achieve a balanced budget in 2020, analysts of the Slovak Central Bank (NBS) stated in a report on the draft budget issued the same day.

NBS added that based on the ministry’s draft budget the public finance deficit is expected to reach 0.8 percent of the gross domestic product (GDP) in 2018. However, compared to the governmental Stability Programme for 2017-2019, the budget targets were off by 0.3 percent of GDP in 2018 and by 0.1 percent of GDP in 2019, the analysts found, as reported by TASR.

Moreover, the aim to achieve the medium-term budgetary objective of a structural deficit of 0.5 percent of GDP has been postponed from 2018 to 2020, NBS writes in its report.

“Meanwhile, the budgetary plan for 2019 and 2020 shows deviations from the budgetary target of 0.2 and 0.3 percent of GDP, respectively,” the NBS analysts stress, as quoted by TASR. “No specifications on covering these deviations have yet been provided in the draft budget.”