Authorities did not approve double cross logos for the extremists

The double cross, once the symbol of Fascist Hlinka’s Guard during the World War II, has been found to be extremist in a recent ruling. 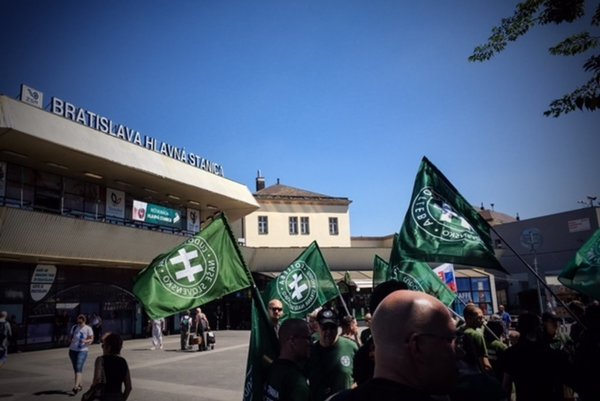 Ultimately, the state will not grant the far-right party of Marian Kotleba, People's Party – Our Slovakia (ĽSNS), the right to exclusively use its logo, involving the symbol of double cross. The state argues that the double cross is a direct reference to the paramilitary organisation of the war-time Slovak state, Hlinka’s Guard. 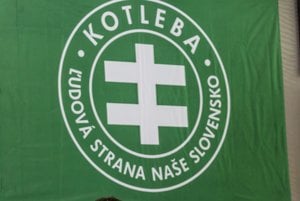 The Industrial Property Office (ÚPV) thus refuses to register four trademarks the party applied for last year, the Sme daily wrote on December 1. If they were acknowledged, the ĽSNS party would have the exclusive right to use them and could even sue people for mocking the symbol at anti-fascist protests.

This is the very first decision of state authorities that has identified the double-cross as an extremist symbol. The decision came at the initiative of doctor and assistant professor of criminal law, Peter Kováč. The ÚPV did comment officially on its ruling yet but has already shared its decision with the ĽSNS. The party described dissatisfaction with the decision, especially since it resulted from a complaint signed by a single person, Kováč.

“The Kotleba boys (i.e. ĽSNS and its sympathisers) virtually ask for everyone who is annoyed by their application for registering the trademarks to send to ÚPV their statement,” Kováč reacted, as cited by Sme.

They can be stripped of an older trademark

In his complaint sent to the ÚPV, Kováč also pointed out that the ĽSNS symbology strikingly resembles the signs of Hlinka’s Guard and its members who actively participated in persecuting Jews, the Roma and also Czechs and democratic Slovaks in the Slovak state during World War II. Thus, the use of this trademark violates good manners.

ĽSNS argued that a double cross can be seen in coats of arms of several Slovak cities and towns, e.g. Nitra, Topoľčany or Skalica. Historians and heraldists responded by saying that these towns have used the double cross since Middle Ages when it was part of the state symbol of Hungary. On the other hand, ĽSNS uses an emblem that renews the sign of Hlinka’s Guard, experts explain.

The refusal to register four trademarks may also mean that Kotleba and ĽSNS will lose their older trademark from 2014 – the same logo, only in grey colour.

ÚPV, which did not receive any motion then, admitted it will probably re-evaluate its older decision.