New biomaterial may help patients to recover sooner, without negative side effects. 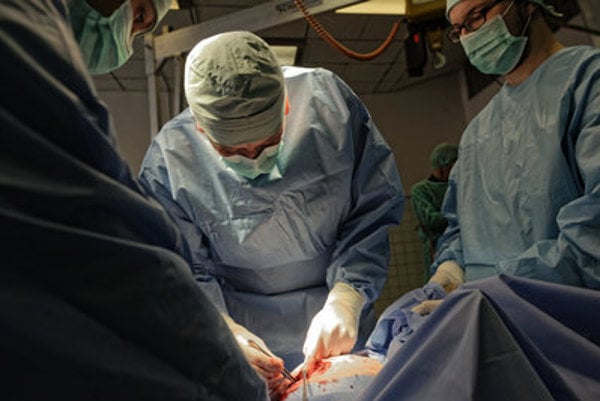 The demonstration of surgical application of bio-material on a pig (at University of Veterinary Medicine and Pharmacy in Košice-UVLF) . (Source: TASR)
Font size:A-|A+145

Patients may have a chance to have their damaged cartilage or bone replaced with unique biological material. It was developed by a team of scientists from the University of Veterinary Medicine and Pharmacy in Košice (UVLF) and the Institute of Materials Research of the Slovak Academy of Sciences (SAV) in Košice.

The implementation and testing of original biomaterial proved the ability to create not only missing bone, but cartilage after traumatic damage of articular cartilage, the scientists said. The unique material from Košice has potential and represents an important milestone in treating and regenerating people’s motion apparatus, the SITA newswire reported.

The results of the previous research were only implants enabling the creation of tissue that was only similar to cartilage, and not actual cartilage, said Ján Danko of UVLF.

“The promising results of the preliminary pre-clinical in vivo tests suggest that our biomaterial implant can significantly support the creation of new articular cartilage and replace damaged cartilage,” said Ľubomír Medvecký of SAV’s Institute of Materials Research, as quoted by SITA.

The biomaterial is unique due to its composition and preparation.

“It’s a non-toxic composite biomaterial based on Chitosan,” Medvecký said, as quoted by SITA. “It is important that non-toxic organic dissolving agents are used in its preparation and that it is possible to sterilise in standard way.”

Scientists do not want to reveal the detailed composition of the biomaterial yet. They will do so as soon as they obtain a patent, SITA wrote.

It is only known that the material can be molded and used to address any defect of the cartilage and nearby bone. There is no negative immune response from the body, and the method does not require the use of any expensive growth and immunity-stabilisation substances. It is also possible to apply it without using cultivated stem cells or chondrocytes, SITA reported.

In addition, it will be necessary to perform only one surgery, instead of the current two.

Several doctors have appreciated the material, also praising its price.

UVLF is the only Slovak university to test biomaterials to regenerate bones and cartilages both in vitro and in vivo, by using higher vertebrates. Unlike international institutions, they have achieved great results in very modest conditions.

The scientists still have to complete the testing of the developed biomaterial on animals and then carry out a clinical study in human medicine, SITA reported.

“To continue with the experiments and use the results in human medicine we need to receive EU funds,” Danko said, as quoted by SITA, adding that they have not yet received any finances though they have repeatedly tried.

Thank you for singing up. Shortly an email will be sent to the address you provided to verify your e-mail.
Error! Please try to register again later, your e-mail was not registered.
Your email is not in a correct format.
Please confirm you are not a robot.
Share on Facebook (145)