The robbery in Bratislava of jewellery worth almost €900,000 – not €500,000 as originally calculated – probably involves foreigners. 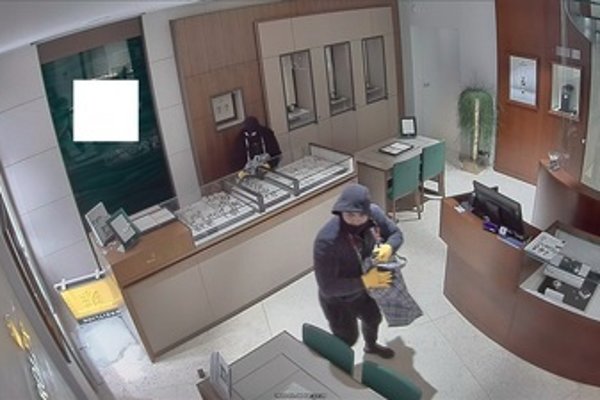 The robbery of a jeweller in downtown Bratislava (Source: KRPZ/SITA)
Font size:A-|A+3

Police revealed that the sophisticated ram-raid of a posh jewellery shop in downtown Bratislava could have been orchestrated by foreigners, probably from the Balkans or a Russian-speaking country. The car used in the raid was allegedly stolen and got into the pedestrian zone through Židovská Street, the Pravda daily wrote citing a police source.

Also, the damage done to the Sheron jewellery shop has been valued at €880,000 instead of €500,000 as originally calculated. 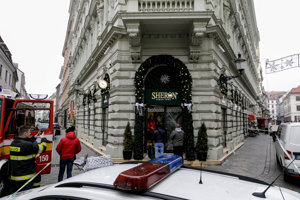 “Due to the camera shots and video-recordings available, criminal investigators think that foreigners could be involved,” Police Corps President Tibor Gašpar said on January 9, as quoted by Pravda. Police have at their disposal several recordings from city police cameras and also private cameras from neighbouring shops and restaurants. They published a description of the clothes and appearance of the four thieves involved, with one of them also showing part of his face. The police have published a video and a call to the public for help in identifying the thieves on their Facebook site.

How was the raid accomplished?

The thieves got to Panská in the stolen car, a dark-grey BMW 530d, probably under the SNP bridge; they sawed off one of the security barriers in Židovská Street with an angle grinder and entered the pedestrian zone from Rybné Square at around 04:00 in the morning, which would not be possible during the day. The concrete barriers safeguarding the Christmas markets (in Hviezdoslavovo Square) from potential terrorist threats had already been taken away.

Both the security company guarding the jewellery shop and the police arrived quickly but were not able to catch the criminals – the whole raid only took about ten minutes.

The original valuation of the watches stolen has been reassessed at €880,000.

The former head of police investigators and current professor of criminal law at the Pan-European University, Jaroslav Ivor, told Pravda that the robbery was well-organised, planned and executed with extraordinary courage and even arrogance. The crime will be defined as burglary and armed robbery as the criminals used a car as a weapon.

Not even the fact that the thieves are probably foreigners should prevent the police from finding and charging them, Ivor said for Pravda.