Surcharges for night, weekend and holiday work will go up in two phases

Surcharges for night, weekend and holiday work will gradually increase in two phases. Representatives of employers, employees and parliamentary deputies for the ruling Smer party agreed upon compromise increases on January 15.

“We led today’s negotiations with respect to possible compromise solutions,” said Labour Minister Ján Richter after the session, as cited by the TASR newswire. “We have submitted a compromise proposal that coalition partners okayed too and thus it should be passable in parliament.”

“What we, as employers want, is that the competitiveness of our industry is not harmed and that this [hike in surcharges] does not have a fundamental impact on work places,” said Roman Karlubík, first vice-president of the Federation of Employers’ Associations (AZZZ), after the negotiations. “In any case, we have to say that we as employers are not satisfied even with this proposal. We take it only as a kind of compromise.” 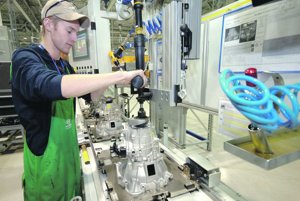 The social partners also agreed upon the introduction of a surcharge for weekend work. Originally the Smer deputies proposed it at 100 percent of the minimum wage. Based on the compromise proposal, the surcharge will account for 25 percent and for 50 percent, respectively, for work on Saturdays. On Sundays, the surcharge will be higher - 50 percent and 100 percent, respectively. Employers will again be able to agree upon exemptions, but this time the surcharges will be not divided into ordinary and risky work.

The proposal for the increase of the surcharges for work during holidays remains unchanged. It should increase from the current 50 percent of the average wage of the worker to 100 percent.

The draft revision to the Labour Code increasing the surcharges is already in parliament, in the second reading. The new rates of the surcharges should become effective as of May 1.