I have met dozens of people possessed by Satan, exorcist claims

An exorcist can help a believer to escape their problems but not to solve them, psychiatrist Hunčík says. 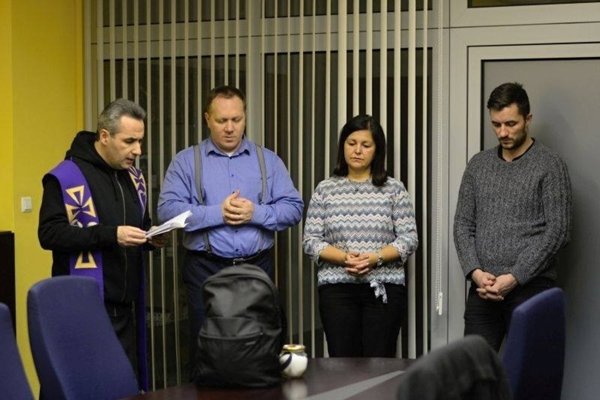 They suffer from depression, illnesses that have no diagnosis. They believe that they are controlled by magic, a curse or the evil eye. They cannot sleep, as things around them start moving on their own, for example. They have sleep paralyses, where neither pills, nor doctors can help.

These are just some of the grave mental states into which people who seek an exorcist are sinking. The Sme daily spoke to one of them, Matúš Marcin from Klokočov near Michalovce.

An exorcist is a priest officially appointed by a bishop. He deals with people who have spiritual problems of various kinds, or are “obsessed with dark forces”.

Famous psychiatrist Peter Hunčík says that he, too, knows colleagues in his profession who send some of their patients to exorcists. However, he personally sees exorcism as an escape from problems which you cannot handle. He believes that exorcism helps to chase the problems away but not to solve them.

Last week, Slovakia was reminded of the issue of exorcism by the new Žilina regional governor Erika Jurinová of OĽaNO. She allowed her office in the Self-governing Regional Offices be consecrated by the priest and exorcist, Ľuboš Václavek.

The National Centre of Medical Information has also recorded an increase in people with mental issues in the past two years. The cabinet of Robert Fico at its last session, therefore approved the concept of care for the mental health of the citizens of Slovakia.

As many as 50 serious conditions

“I have met 40 to 50 cases of obsession with a demon,” exorcist Marcin claims about his experiences over two-and-a-half years. He is a Greek-Orthodox priest and was appointed for this service by the Košice eparchial Bishop, Wladika Milan Chautur.

In Klokočov, where he works, he regularly organises prayer meetings with local priest Petrer Čintala, aimed at freeing and healing people who are plagued by demons and request exorcism. These people come from all over Slovakia, as far away as from Pezinok, Čintala says. The number of visitors at these meetings has been growing each year, according to both priests.

“Only vivid faith in Jesus Christ, abnegating evil, life in Holy Spirit, prayer, sacraments, fasting and reading the Holy Script can make saints, even of the worst people and free them from their torment or obsession."

TV channels appear to be mostly behind the rise, those which specialise in fortune-telling and which promote occultism or magic. Healers can help you temporarily, but then your condition worsens exponentially, Marcin explains. Also, people who get involved in any form of magic have many serious problems, according to the exorcist.

Thank you for singing up. Shortly an email will be sent to the address you provided to verify your e-mail.
Error! Please try to register again later, your e-mail was not registered.
Your email is not in a correct format.
Please confirm you are not a robot.
Share on Facebook (65)