Crematorium in Bratislava is an architectural revelation

Those who have experienced farewells in other crematoria know what makes it special. Now the best work by the architect Ferdinand Milučký is getting a monograph 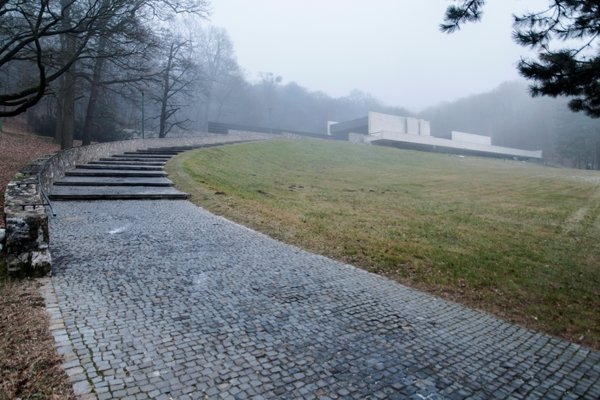 “The crematorium designed by architect Ferdinand Milučký in Bratislava from 1962-1968 is like a revelation. It is a world-class work, masterfully embedded in the landscape. In my opinion, this is the most significant creation in the territory of the former Czechoslovakia after the Second World War,” wrote historian and architect Zdeněk Lukeš back in 2010 in his article for the Czech Lidové Noviny daily, describing the elegant white oblong building leaning against the forest at the foot of the Small Carpathians. The director of the Slovart publishing house, Juraj Heger, remembered his words very well. So he was really pleased when architect Matúš Dulla approached him in October 2016 with the idea of ​​writing a monograph about this unique work.

“The Bratislava Crematorium and its creator, the architect Ferdinand Milučký, absolutely deserve it,” Heger said during the ceremonial launch of the book At the End of the Road at the crematorium in Bratislava last November.

Milučký was born on September 26, 1929 in Rajec, close to Žilina. He studied architecture in Bratislava at the Slovak Technical University and was one of its first graduates. In design he demonstrated a feeling for terrain. Apart from the crematorium, he demonstrated his exceptional ability when designing Ružinov real estate or today’s Andrej Hlinka Park. He also designed the House of Art in Piešťany and the no longer existing exhibition pavilions in the former PKO on the bank of the Danube River. His greatest architectural work is the crematorium with the urn grove in Bratislava.

In this exceptional Slovak-English book, author Matúš Dulla not only points out what makes Milučký’s architecture so exceptional but sets the process of its creation in historical context, a local as well as foreign one. This makes the book interesting not only for architecture experts but is easily readable for all those interested in art, history or Bratislava.

The book contains photos by Olja Triaška Stefanović. Her pictures sensitively capture the transformations of the crematorium and its surroundings in all four seasons.

“It was a great challenge because the function of this building is very serious,” said the photographer. “But already during the first walk throughout the whole area I realised that its connection with nature was very strong and that it had a very strong emotional code embedded in it. When we are parting here from a close person, nature and the changing seasons tell us about the cycle of life.”

Dulla considers this crematorium to be unique. Its architecture is not closed in on itself like many Czech-Slovak crematoriums built before it.

“Milučký designed it in such a way that we are looking out of it into nature,” said Dulla. “He embedded it into the terrain and along with the arch of the access path these are all the great things that came out during the exceptionally favourable times of the 1960s.”