Slovakia can draw €15.493 billion from EU funds within the current programme period ending in 2020. 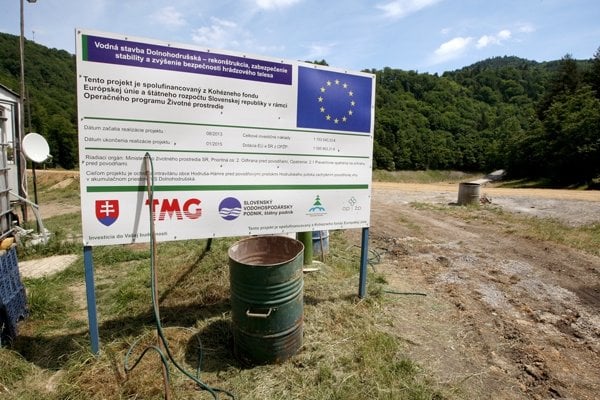 Signs across Slovakia show what has been reconstructed or built from EU funds. (Source: Sme)
Font size:A-|A+3

The EU’s cohesion policy should be less administratively demanding in the future, and it should be better targeted towards less-developed EU regions, stated vice prime minister for investments and informatisation, Peter Pellegrini (Smer) on January 18, after meeting the European Commissioner for Regional Policies, Corina Cretu in Bratislava. Cretu is at the beginning of a series of visits to some EU member countries relating to the preparation of a new financial framework for the EU. The European Commission should present its first draft budget in May.

On Wednesday, January 17, the Slovak cabinet approved Slovakia’s starting position on the EU Cohesion Policy after 2020.

“Slovakia supports the preservation of a strong cohesion policy within the future multiannual financial framework after 2020,” said Pellegrini, adding that the policy should form at least one third of the budget, as cited by the TASR newswire.

He said that if a debate on increasing the contributions of individual EU-member states is initiated, Slovakia is willing to discuss a possible increase in its own contribution to the EU budget.

Pellegrini further said that Slovakia wants to play a more active role within EU debates and that the country is convinced that the cohesion policy must remain the EU’s main investment policy.

Around €350 billion from national budgets has been invested within the cohesion policy in the current programme period ending in 2020. Slovakia can draw €15.493 billion. So far it has used up €1.748 billion. It can draw money until 2023.

Cretu expects the budget talks to be demanding due to various challenges, including Brexit, that may reduce the budget, such as migration, defence and security issues.