A medieval master whose works belong on a UNESCO list is being celebrated in the capital with an exhibition presenting the variety of his art as well as the context in which Master Pavol created his craft. 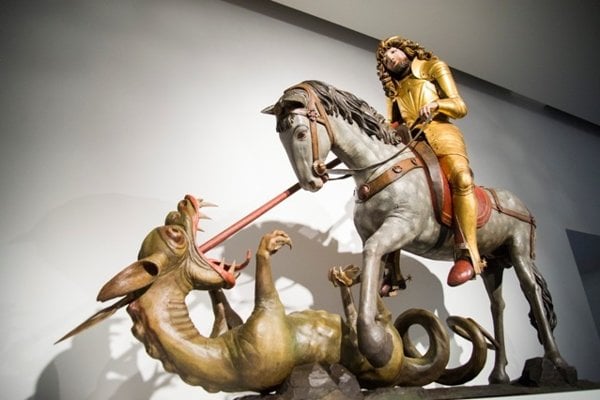 The works of world-renowned mediaeval artist and craftsman, Master Pavol of Levoča, are being exhibited at the Bratislava Castle to mark the 500th anniversary of the completion of his biggest and most famous work, the main altar of St James' Church in Levoča. As it is not possible to bring the whole monumental alter to the Slovak capital, other works have been moved there. Altogether 27 parishes as well as several museums, galleries and secular archives contributed to the exhibition.

The idea to present Master Pavol outside his hometown came during the presentation of his mastery in Rome several years ago, head of the Slovak National Museum (SNM, which administers the exhibition halls at the Bratislava Castle) Branislav Pánis noted. 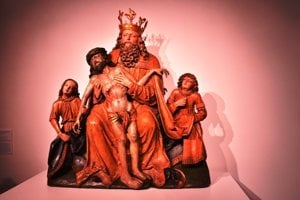 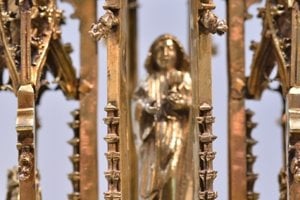 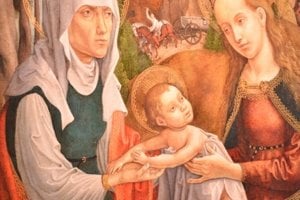 There is an even older incentive for the current event, however. When Master Pavol had an extensive exhibition in Levoča 50 years ago, a successive event in the capital was planned but for various reasons, it never took place – until now, one of the curators, Mária Novotná of the Levoča branch of SNM, revealed. Thus, the display called Master Pavol of Levoča: Hands and Gold Serving the Spirit is a sort of “debt repaid”.

The concept of the latest exhibition is unique, however, and differs from both previous ones, Novotná added. She explained that, as the title suggests, they wanted to present the work of Master Pavol both in its variety and in the context of the time period.

The idea to exhibit the work of Master Pavol in Bratislava has two aspects. Apart from showcasing his mastery, it is also meant to lure inhabitants and visitors of the capital to view the world-renowned originals of the mediaeval artist in the place where they prevailingly came to exist, in and around Levoča.

Master Pavol's works have been found and preserved not only in Levoča, but also in some nearby municipalities in the Spiš region, as well as in towns such as Banská Bystrica and other rich mining mediaeval towns or villages in the Gemer and Liptov historical regions. His rich work is not just the pride of Slovakia but, since 2009, a part of the UNESCO world cultural heritage as well.

Unlike many mediaeval artists and craftsmen who are known only by their country and their works or the style of their workshop and school, a relative number of facts about Master Pavol of Levoča are known. He lived between approximately 1465-1480 and 1537-1542 (the range of estimations for birth and death), and he was a carver, sculptor and author of the biggest wooden altar in the world, the main altar of the St James' Church in Levoča. Records show that he settled in the town some time after 1500 and had a carving and painting workshop there. He married the daughter of a local respected burgher, a church administrator, and his work was the completion and culmination of a 200 year tradition of woodcarving in the Spiš region, as well as in the whole of Slovakia.

As Novotná outlined, Master Pavol is presented in the context of his times, with an explanation of the main role of his works and other liturgical items, the period situation he lived in including the incoming Reformation, and descriptions of period methods and processes (e.g. dyes and paints), as well as with a portrayal of Pavol as a person. It is divided into three parts, showing how the rising Renaissance, humanism and Reformation impacted his work.

Thus, also historical items depicting mediaeval art, religion and habits are presented at the Bratislava Castle. Apart from eleven of his works – such as altars, calvaries, statues, and other spatial wooden works – there are also mediaeval documents, historical chalices and monstrances, as well as the famous painting Mestercia from Rožňava.

“We tried to bring to our contemporaries the spirit of the times in which Master Pavol lived, and to stress the elements which impacted him in both the material and spiritual sphere,” the second curator, Alena Piatrová of the Historical Museum of SNM, explained.

The exhibition, celebrating the 500th anniversary of completing the main altar of St James' Church in Levoč, lasts until March 18, 2018 and includes accompanying events, alongside a haptic and interactive zone for the visually impaired, as well as a comprehensive catalogue in both Slovak and English.